My family is prone to humorous life choices. This means they feature heavily in my conversations after a half a beer, or in anything I try to write, especially in the seasons when the skies are grayer than three-month-old bread.

Fostering cats is an activity for people who want to be crazy cat ladies, but aren’t yet ready to completely ax their social lives. Let’s be honest, being a foster cat-parent brings you as many friends in college towns as using hamster droppings for chocolate cupcake sprinkles. It’s just not cool. 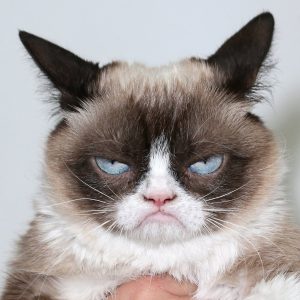 Don’t talk to me…

Unless … cat-fostering brings you the opportunity to meet people as strange as you are. Cue cat adoption events.

I didn’t even know these things existed. Here in town, the Panhandle Animal Shelter has such an amazing adoption rate that they frequently fly in unwanted animals from other states to meet local demand. So, I had this idea that pets were sort of a bigger deal now than when I was a kid. But, apparently there are now cat swaps where people get together and talk about the cats they might give up for adoption sometime soon.

Faye and her husband met a gentleman at one of these events recently. As he was talking through how wonderful the cat was, he became so distressed at the thought of giving it up that he teared up and choked himself into silence. Faye awkwardly rescinded her previous admiration of the cat and encouraged him to keep the darn thing. “I couldn’t do it,” she told me afterwards. “There was no way I could have taken that cat from the guy, no matter how much I loved it.”

As far as I understand (though Faye would surely correct me), the idea behind fostering a cat is that, at any time, you can claim that you don’t actually want to keep the cat, to protect your faltering coolness levels. To preserve the claim’s appearance of validity, however, you have to do odd things. A few months ago, Faye had to drive her new cat child to a local TV studio for morning news “Adopt Me!” segments. And then when her cat acted like a cat and didn’t ham up for the camera, it was her job to act surprised and make sure everyone knew all of its typically amazing personality traits.

By practicing extracurricular activities and slightly dishonest bragging, you can also claim your pet-parenting is a form of practice for human child production. This is hogwash, as my boyfriend Dan likes to remind our friends at dollar beer night.

Recently, over the hubbub of a boisterous Eichardts crowd, a couple that we know fairly well informed us that they were getting a puppy to “practice” for the “next step” of children. Dan laughed and glanced at a three-deep parent across the table. “Nope,” Dan said confidently, “that’s not practice.”

There was a hearty cheers from the bearded dad.

“When my dog does something dumb,” Dan said, “I can put him on a leash. Or smack him on the nose. And I never have the worry that he’s going to accidentally impregnate somebody in his social circle. Definitely not the same thing.”

“That’s right!” A raised glass from the beery beard.

Since I’m personally inclined to remain childless as long as possible, my own pet-parenting is more likely to give me practice in caring for my older family members. Two years ago, my parents confirmed my suspicions that they’re phasing out of the responsible-decision-making stage when they bought a 2,500-square-foot pole barn on ten isolated acres near Deer Park, Wash. My mom had been dreaming of a tiny turtleshell of a house encrusted with solar panel scales for years, so when they up and bought the worst-constructed building I’d seen this side of the Continental Divide, I was a wee bit shocked.

The “Barndominium” is a work of pure genius. Someone built the place with a couple of empty pockets, a gutfull of lard, and a unique sense of creativity. The electrical outlets are literally installed at 45 degree angles in several places… to reduce time spent dusting, I’m assuming? There isn’t a square piece of drywall in the entire living room, and the mudding is artfully crude (to prove that some degree of mudding was actually accomplished). The washer and dryer were installed in the guest bathroom before the door was framed, and somehow no one thought to measure the door to see if they could come back out again.

My parents’ ever-ongoing remodel makes your need for new kitchen tiles look like child’s play. Plus, there’s the creepy part. Every time my dad removes a sheet of drywall, he finds kids’ toys and random house objects framed into the crawlspaces, which is starting to give my mom the heebie-jeebies. They haven’t found any skeletons, but they’ve found a few random photographs propped up on supporting beans as they’ve peeled back the drywall.

Since I obviously don’t get the cat-fostering thing, my parents’ house gives me something appropriate to fret over with Faye whenever she calls. I’m not too worried, though. My folks and I have already agreed, when it’s time to move them out of the apocalypse house and into a place that needs more care, they’re headed straight for Luther Park. That place gets rave reviews from all my clients, who have informed me that Luther Park residents get to enjoy a daily happy hour. Score!

In the meantime, as I watch my parents try to prove that sheer willpower will make this place into a home, I think to myself — yeah, those are my people, and chances are, they’ll pull it off. Optimism has brought our family (and our pets) through worse before. We may not be fit, but we’re surviving, and what doesn’t kill us makes us weirder.

PollyAnna lives, writes and loves the “good stuff” in Sandpointian life in between cuddling her new kitten from PAS, or jogging the Pend Oreille Bay Trail with her Lab-mix step-child.