In Norse mythology, Valhalla is a majestic, ornate hall located in Asgard, ruled over by the god Odin. Half of those who die in combat travel to Valhalla, led by Valkyries. Once in the fabled hall, the dead join the masses of those who have died in glorious combat.

I could not think of a more fitting name for Valhalla Provincial Park just outside of Nelson, British Columbia. Well, except for the whole dying part. 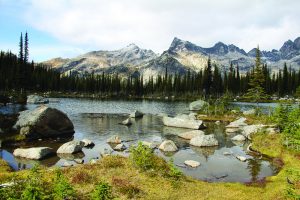 The view of the majestic Selkirk Mountains in Valhalla Provincial Park, as seen from our campsite at Wicca Lake. Photo by Ben Olson

Living in a paradise like Sandpoint, we are usually targeted by out-of-towners for weekend getaways. But with such a high bar set, where do we Sandpointians go when we desire to get out of town? One favorite haunt is Nelson, just three hours north.

Our sister city, Nelson, resembles Sandpoint, but with a college and a little more cultural diversity and face piercings.

My girlfriend, Cadie, and I recently spent a three-day weekend in B.C. We spent one night in Nelson drinking expensive beer, then set out for a backpacking trip to Valhalla Provincial Park the next day. Little did we know we were going to be entering one of the most stunning expanses of the B.C. Selkirk Mountains.

At over 124,000 acres, the Valhalla is a treasure trove of outdoors opportunities. There are dozens of mountain lakes and cathedrals of mountains that seem to get better the further you travel into the heart of the park. The scenery reminds me of a smaller version of Yosemite, complete with waterfalls, iconic granite domes and breathtaking skylines.

We elected to try the hike to Gwillam Lakes, which was advertised as the best bang for the buck to get you into the high ground quickly. To get to the trailhead, take BC-3A / BC-6 west of Nelson and follow it north to the Slocan Valley area. The drive is quite a haul—almost two hours of paved and unpaved roads culminating in a Jeep trail the last two miles that requires Subaru or above clearance. Don’t take your Honda Civic up here unless you like walking back to the States.

At the trailhead, there were lengths of chicken wire handy for people to protect their undercarriages from meddlesome porcupines, who have been known to nibble right through brake lines and tires. Nothing like coming back from a great hike and dying in a fiery crash over the hillside because your brake lines failed.

From the trailhead, we began our upward ascent toward Gwillim Lakes. The guidebook classified the trail as “easy.” I’d like to meet these guidebook authors. They probably resemble the Valkyries that lead fallen warriors to the halls of Valhalla. Not only did these trails go straight up from step one, there were a few talus slopes with medium boulders and a few ragged inclines that were not for the faint of heart. From trailhead to our campsite—about six kilometers—the trail climbed an astonishing 3,800 vertical feet. That’s damn near three quarters of a mile straight up. I’d call the trail “moderate” at best. Wear a sweat band.

The first point of interest, after a tough hike up a talus slope is Drinnon Lake, about an hour into the hike. You can rest here and even camp, but the scenery gets much better.

Up and away from Drinnon Lake, we climbed Drinnon Pass with stunning views all around. At the top of the pass, we settled into a pleasant meadow with a dozen tent pads dotted along an unmarked lake we later found to be called Wicca Lake. There was a common kitchen area with a picnic table, grey water washing station and food storage box.

Though there were a handful of cars at the trailhead, we had the entire place to ourselves.

Instead of hiking further to our destination, Gwillam Lakes, we decided this was as good a place as any. We set up our tent, pumped some water and ate our backpacker meals as the afternoon turned golden. The elevation was the same as Schweitzer’s summit, so once the sun went behind the mountains, the temperature dropped off suddenly.

A variety of wildlife exists within the park, including grizzly and black bears, mountain goats, mule and whitetail deer, cougar, golden eagles and alpine ptarmigans. While we didn’t see much hiking in, after dark, we heard a lot of activity outside our tent. By a lot I mean a LOT of activity.

I like to think I’m a pretty tough guy when it comes to sleeping outdoors, but some of those footsteps we heard sounded pretty big. I mean REALLY big. That and I have an unorthodox fear of grizzly bears. Maybe it’s because I watched that movie “Grizzly Man” one too many time.

Our food was stored safely in the bear box 100 yards away, but I still came awake at every bump in the night, yelling “HEY BEAR!” and cringing when something stomped off into the dark Valhalla night. The worst part was that I couldn’t see anything, which allowed my imagination to run wild.

The next morning, I awoke glad to not be inside the stomach of a grizzly bear. We opened the tent and were greeted with drizzling rain. The peaks around us were covered in a heavy dusting of fresh snow. A few degrees less, our tent would’ve been covered. Because we had our sights set on a soak at Ainsworths Hot Springs before driving home, we decided to forgo the final leg of the hike into Gwillam Lake and headed out. Sometimes it’s nice to save something for next time.

Once down the mountain, we stopped at the first gas station we saw to wash up and drink water that didn’t have to be filtered from the lake. The clerk asked if we had any trouble with bears, saying that they have been “bad lately.”

Later, passing through Nelson for lunch, I read in the newspaper that over 2,500 bear conflicts had been reported in the region over the past month. The article stated bears had been interacting with humans at an increased rate because they had endured a sparse summer and were fattening up for winter hibernation. Gulp.

“I’m glad we didn’t read that article before we headed up there,” said Cadie.

As the photos prove, the Valhalla is truly a gem of the Canadian Selkirks. We spent one night there, but I imagine you could spend weeks among the picturesque spires and cathedral rocks.