For author and scientist Ken Fischman, the modern world hasn’t diminished the call of the wild. On the contrary, it has only grown louder for him as others become more detached from their natural roots.

Fischman focused that call into a recent collection of essays exploring man’s relationship with nature. Entitled “Sleeping With Wolves,” the book seeks to find a complementary way of living with nature through stories that are in turns funny, informative, profound and poignant. 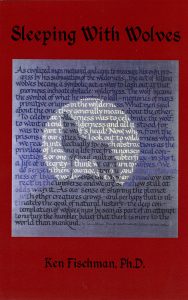 As one might expect from the title, “Sleeping With Wolves” uses the wild canines as a muse for the book’s naturalist themes. The creative choice in apropos in the wake of several high-profile controversies in wolf management. Critics call the animal a predatory menace, while conservationists argue they must be protected and preserved.

The relationship between man and wolf surfaces time and again throughout the book. In the second chapter, “The Tracks at Chauvet Cave,” Fischman recalls spotting wolf tracks intermingled with those of a prehistoric child near the cave paintings captured by the Werner Herzog documentary, “The Cave of Forgotten Dreams.” The discovery raises an intriguing question: Were the wolf and child companions or adversaries?

“Chauvet Cave is a marvel indeed, opening to us not only a window onto the considerable artistic abilities of Paleolithic man, but also into his inner life, and perhaps in the case of the child and wolf, into his connections with the natural world,” writes Fischman.

Born in Brooklyn, Fischman has long felt a kinship with nature, and it’s influenced the development of his career. After earning a Ph.D. in genetics, he contributed to research projects at Columbia University. While advancing the cause of science, he also found time to found the Columbia University Kayak Club and serve as vice president of New York Rivers United.

To learn more about Fischman and his work, be sure to attend a reading and book signing of “Sleeping With Wolves.” The gathering will  take place 11 a.m. Saturday, Oct. 8, at the Sandpoint library.