For comedian Lonnie Bruhn, there are no topics too taboo to include in his act – except politics, which he claims aren’t taboo, but “too boring.”

For the upcoming live comedy show on Saturday, Dec. 2 at 8 p.m., Bruhn will join host Morgan Preston and fellow comic Jamal Harrington for a night of laughs. The show takes place at the 219 Lounge in Sandpoint with tickets going for $10 in advance, or $12 at the door. 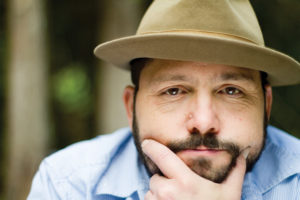 The Portland, Ore., comic, who aired on NBC’s “Last Comic Standing” season nine, is no stranger to controversial and provocative routines. Being born with Cerebral Palsy, Bruhn has made a career out of making people laugh about subjects not included in normal comic routines.

In Bruhn’s new uncensored show, “Signs of a Midlife Crisis,” he focuses on one of his biggest challenges both comedically and emotionally – the story of his oldest son’s diagnosis and battle with Borderline Personality Disorder, plus his two-year hiatus from stand up comedy as he and his family dealt with it.

“People don’t want to discuss or share their experiences with mental illness among their closest friends and family members, so bringing my personal story to the stage and making it funny seemingly breaks all of the rules,” said Bruhn.

Bruhn first knew he wanted to be a comedian after he watched a Richard Pryor beta tape in the fourth grade.

“When we watched it, everybody watching with me was laughing,” he said. “I knew it was funny, but I was sort of in awe that someone could have a conversation with people and make them laugh. I decided right then and there that’s what I wanted to do.”

Bruhn said he rode around on his big wheel and told Pryor’s jokes, along with another early favorite George Carlin, until he started developing his own material.

While mining for material, Bruhn didn’t have to look far to find a topic that set him apart from many of his favorite comics: being born with Cerebral Palsy.

“I realized from a young age I was going to have a difficult time,” he said. “I was really self aware from a really early age. I don’t think I would’ve become a comedian (if I hadn’t been born with Cerebral Palsy). It allowed me to really witness everything around me at a much slower pace, and from there I was able to break down the way people think.”

Bruhn, from his perspective outside the norm, studied people and listened to how they talked to each other.

“Part of the reason why I’ve been successful is I have this innate connection with my audience and people in general,” he said. “I couldn’t really play a lot of the other reindeer games with the other kids. While they were all climbing trees and getting in trouble, I was just witnessing everyone and witnessing what’s wrong with us all.”

Like most comics and performers, Bruhn looks back on some experiences that tested his mettle.

“I think the very first show I did, right out of the gate, was the worst show I ever had,” he said. “My parents had just kicked me out after this big fight. I had a leather jacket on with all these fringes and a mullet and cowboy hat. I looked like a Canadian hockey player.

“I go up on stage in all this getup, which was a terrible idea,” he continued. “I learned my lesson. It was the longest three minutes of my life. But, when I got offstage, I was hungry to do it again.

Bruhn stuck with it, powering through the awkward sets, and became more comfortable on stage. Two years after his first attempt at live comedy, he ended up winning the Portland Laugh Off. At 19 years old, he was the youngest to ever win the award.

After his big win, Bruhn hit the road for a tour of comedy clubs and bars.

“I did a lot of work in Canada,” he said. “The gigs in Canada were pretty bad. I was competing against hockey.”

For Bruhn, who changes his act often, taking a two-year hiatus to deal with family issues was a setback.

“Over the last couple years dealing with a lot of stuff with my oldest son, it’s really pulled me completely out of the idea of writing,” he said. “It took me a long time to get to the point where I could see the funny things happening from the worst moments of my life as a parent. This is what I do best, I tell stories about the challenges in our life, breaking them down in a way that makes it okay for us to laugh.”

Bruhn said in today’s divisive atmosphere, being able to laugh is more important than ever.

“This is when comedians really get to shine,” he said. “It’s our job to find a way to make these issues funny. Despite everyone’s opinion. All of us are really unhappy it seems. We’re not laughing. This is the time that comedians have to step up to the plate and cut through it all. To find a way to laugh about it.”

Catch Lonnie Bruhn at the 219 Lounge on Saturday, Dec. 2, at 8 p.m. with host comic Morgan Preston and fellow comic Jamal Harrington. This show is uncensored and may contain explicit content not suitable for every audience.