Fractured Lines: A column all about snow safety

The combination of untracked powder, wide-open terrain, and no crowds is an alluring image to most everyone who skis or snowboards. Spectacular photos, and stunning footage of high-level riders experiencing that magical combination fill the pages of the magazines we read, the computer screens we stare at, and the movies we flock to. They stoke the fire in many of us to seek out the same type of steep-and-deep conditions we see “rock-star” athletes experiencing, while others are attracted to the beauty and solitude of an undeveloped and pristine environment that lies somewhere outside the normal, everyday resort setting. 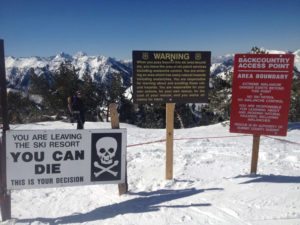 Resort skiing and riding may not be as sexy or spectacular as what is depicted in movies or magazines, but it does have its advantages; for one, it’s easier and less physically demanding than a multi-hour approach to some sweet but remote “backcountry” powder run. Secondly, it’s less expensive than a day of helicopter skiing, and thirdly, if you get in trouble, you can count on a rapid response by a well-trained, competent crew of ski patrollers just waiting to come to your rescue. But still, what we see in the magazines does look like fun!

How then does the average person who doesn’t have the time, the money, or the required amount of energy, get to experience the thrill of backcountry skiing that we find so intriguing? The answer for many seems to be the Backcountry Access Gates located along ski area boundaries.

Back in the 1970s, as more and more people became proficient at skiing untracked snow, there was a burgeoning desire for access to the public land that bordered many of the more popular ski resorts in the western U.S. They seemed to contain an endless amount of attractive and un-skied terrain. At first, ski areas responded to this demand in a variety of ways, from a somewhat authoritarian, closed-boundary policy, to relatively free access along a somewhat porous border, and everything in between. In the 1980s, as resort skiers entering the uncontrolled wild west of the “backcountry” were contributing to the sharp rise in avalanche fatalities in the U.S., the Forest Service set out to standardize its policy that the public have access to public lands for winter recreation. They directed ski areas to improve their signage and boundary-marking policies and to establish easily identifiable, permanent backcountry access gates that allowed skiers to leave the confines of the resort, and at the same time unambiguously informed them that they were about to enter the considerably different environment of the “backcountry.” After that, it was up to the customers to make their own decisions as to what to do. This seemed to be a solidly American libertarian-style approach to a counter culture-style issue that some people embraced, others abhorred, and many more were either confused or oblivious as to the meaning of this newfound freedom.

Today, ski area exit points, as they are now called, are a permanent feature in the majority of ski resorts in the U.S. that border public land. They are extremely popular with the people who can safely utilize them, but they are also a draw to many who don’t completely understand what “backcountry skiing” involves, and just how different things are outside the resort from what they are on the inside. Since 2005, “sidecountry” (backcountry terrain easily accessed from resort boundaries) avalanche fatalities have accounted for more than 10 percent of all avalanche deaths in the U.S. This includes an experienced backcountry skier from Sandpoint who died in an avalanche outside the Canyons resort in Utah more than a decade ago.

It’s pretty cool to ski the backcountry, especially during or shortly after a storm, but that’s precisely the time when backcountry skiing can be the most dangerous. It’s much cooler to “ski the backcountry” with a sufficient amount of knowledge, the right equipment, and most of all, the right attitude. If you are a budding backcountry skier, don’t just follow others through the gate: Be a leader. Listen to the IPAC forecast, take an avalanche class, learn how to use a beacon, shovel and probe, and ALWAYS carry them with you while skiing out of bounds, not just when you “think” it might be dangerous. If you are an experienced backcountry adventurer, be a mentor, make an effort to reach out to younger riders and teach by example just what backcountry skiing entails.