Let’s imagine that Helen Keller were not deaf and blind. Let’s forget temporarily that infamous defining moment around the well pump with Anne Sullivan, all the people she inspired by that, and all the people who wanted to see her institutionalized prior to that. Let’s just disregard adversity altogether. 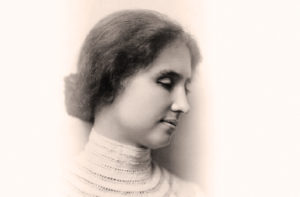 What we have left is perhaps one of the greatest thinkers to grace the 20th century. Keller lived life with a depth of wisdom most of us can only aspire to, yet this is often overshadowed by her achievements in overcoming hardships. We know this to be no small feat, yet we often seem unwilling to move beyond it. But to immerse yourself in her writing is to open a gateway to joy, gratitude, concern, wonder, empathy — a kind of far-reaching effort to embrace all the world offers and a drive to help where needed. The fact that she considered herself primarily an author just reveals her humility—you could easily add philosopher, humanitarian, motivational teacher, civil rights activist, social worker, world traveler, Christian, patriot and socialist to that.

Obviously, the way we get to know Helen Keller is through her writing (you can find YouTube clips of her speaking, but they were often accompanied by translators or captions). In addition to her books, the Helen Keller Archives contain over 475 speeches and essays that she wrote on topics such as faith, blindness prevention, birth control, the rise of fascism in Europe and atomic energy. Several things about her writing stand out beyond the pure eloquence. Right away, one cannot help but notice the depth of her reading. It appears she has a working knowledge of all of history and has read authors from ancient Greece to the present, from famous to obscure. (Once she was falsely accused of plagiarism and Mark Twain and Alexander Graham Bell came to her defense.)

There are other things that stand out as well. There is an insightfulness in her writing that is just plain uncommon. There is an artistic use of poetic imagery that perhaps serves as her palette of colors. There is not a trace of self-pity — on the contrary, her pieces are laced with graciousness and gratitude. “What a joy it is to feel the soft, springy earth under my feet once more, to follow grassy roads that lead to ferny brooks where I can bathe my fingers in a cataract of rippling notes, or to clamber over a stone wall into green fields that tumble and roll and climb in riotous gladness!”

To read Helen Keller is also to read philosophy. As she writes, “Philosophy is the history of a deaf-blind person writ large. From the talks of Socrates up through Plato, Berkeley and Kant, philosophy records the efforts of human intelligence to be free of the clogging material world and fly forth into a universe of pure idea.”

Certainly there is a thread of determination that permeates both her life and her writing. She was always a champion for the underdog, whether it be for the factory worker, the women and minorities, those unable to vote, victims of war, poverty, or hunger, the diseased, the deaf or the blind. She met every U.S. president in her lifetime, from Grover Cleveland in 1888 to her death in 1968. She was appointed Goodwill Ambassador to Japan in 1948 by General MacArthur (on the heels of Hiroshima and Nagasaki).

She also helped co-found the American Civil Liberties Union in 1920.

And, yes, she was a socialist. Socialist shaming is not just a recent event in America — it was much worse back then. In fact, were it not for her notoriety, she probably would never have survived the McCarthy era. But her dedication to what she felt was right rendered McCarthy, I like to think, a mere bump in the road to greater things. She was a diehard patriot who supported American accomplishments and fought to improve its shortcomings. Her writings on socialism can be found in the collection “Out of the Dark.”

Also of note is the collection “Optimism.” While it would take some time to read the entire panoply of her writings, all but her books are offered for free online. What’s more, the internet at times seems a showcase just for Helen Keller quotes—it appears that she has more quotable quotes than almost anyone on the internet.

Or quotes about her:

“The two most interesting characters of the nineteenth century are Helen Keller and Napoleon Bonaparte.”
-Mark Twain