As the new year approaches, so too does the beginning of the  in Boise, set to begin on Jan. 7. 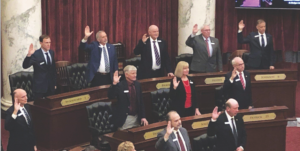 Freshman lawmakers, include newly-elected District 1 senator Jim Woodward in the upper left, are sworn in at the beginning of December. Photo courtesy Jim Woodward.

According to Woodward, he is pleased with how District 1 will be represented in Boise. Like his predecessor, the longtime senator Shawn Keough, he will serve on the Senate Finance Committee, which meets with the House Appropriations Committee as the Joint Finance and Appropriations Committee. This powerful body plays an influential role in shaping the state budget, which amounted to $8.3 billion last year. The committee’s recommendations and decisions influence the work and projects of all state organizations and departments.

The Idaho Legislature is poised to have an eventful year in 2019. In the wake of Idaho voters approving Medicaid expansion this year, health care legislation will be a major topic of discussion, and it remains to be seen how the broadly conservative legislative body will handle the issue. While a substantial majority of Idaho voters want to see Medicaid expanded in the state — about 60 percent voted in favor of the ballot initiative — many state lawmakers have expressed ideological opposition to federally-driven health care.

Anticipating a legislative fight ahead, activists for Medicaid expansion are already calling for unobstructed implementation of Medicaid expansion throughout the state. They say that tacked-on requirements like proving one’s employment will only increase costs for Idaho taxpayers.

The Times-News anticipates that criminal justice and education will also be major themes in the 2019 legislative session. With Idaho prisons bursting at the seams and the Department of Corrections asking for a new $500-million, 1,510-bed incarceration facility, lawmakers will weigh a variety of solutions to the problem, including relaxing mandatory minimum sentences on non-violent drug offenses. Likewise, legislators will examine the possibility of switching from an attendance-based model for school funding to an enrollment model.