City crews had a busy month fixing water mains, including one break late on Christmas Eve. 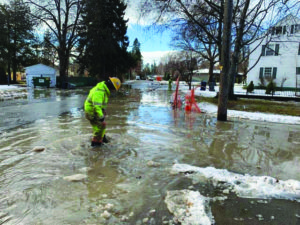 A worker examines a main break in South Sandpoint. Photo by Eric Bond.

Work began earlier this month when a contractor on South Boyer accidentally bored into a 12-inch main. Crews tackled another incident on Christmas Eve, when an old 6-inch, cast-iron main broke.

According to Sandpoint City Administrator Jennifer Stapleton, no cause is identified for the Christmas Eve break. But cast-iron mains are inflexible, so whenever there’s any heaving or an earthquake, the metal can’t move with the earth. In fact, there have been four breaks in 6-inch mains over the last few months. It’s timely, then, that the city is set to conduct a full review of its infrastructure and set priorities in 2019.

Stapleton thanked city street- and utility-crew members for being ready to work over the holidays, especially given the winter conditions which complicate their work.