If you haven’t noticed by now, I like astronauts. A lot.

In this day and age, we are fairly saturated by space-related media. We have a revolving crew of people in the International Space Station, ensuring that it’s manned 24/7. It’s just another run of the mill thing in our age, right?

Not really, no! Did you know that only 536 people have been in space? Not even a full thousand since 1961, when we first started flinging humans into space strapped aboard giant tubes full of explosive fuel. 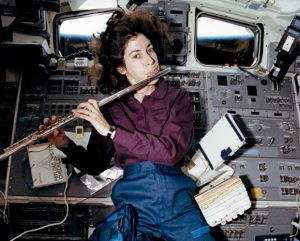 Astronauts are a big deal. If we have even a sliver of a prayer for surviving as a species and outliving the Earth, astronauts are our future. Think about it: If we don’t know how to get off this rock by the time that either our climate completely collapses (an inevitability with or without our intervention) or the sun goes Red Hypergiant, everything we’ve ever worked for as a species will be completely destroyed. Every symphony, every home video, and every taco will be gone… If not for astronauts.

We also like firsts, and Ellen Ochoa has definitely claimed some firsts.

Most notably, she was the first Hispanic woman in space, aboard the Space Shuttle Discovery in 1993. Hispanic women are very, very underrepresented in STEM fields and especially in aeronautics. She isn’t just an astronaut, however, she’s also an engineer specializing in optical systems.

If you’re not sure how that relates to your day-to-day, have you ever noticed how the camera on your phone gets all fuzzy and weird, but corrects itself after a second or two? She is the co-inventor on one of three patents that laid the groundwork for your phone to be able to do that. Thanks to her work, you can snap the perfect selfie.

Though her patents in optical engineering were initially designed for uses in space (cameras and robotics, primarily), as virtually anything designed at, with and by NASA, it had many powerful civilian applications fueling multi-billion dollar markets. Her work also reaches into the domain of robotics, both aboard the International Space Station and here on the ground. It makes sense, right? The more clearly a robot can see something, the more likely it will be to complete its task with precision. I wouldn’t want to try threading needles with sleep in my eyes, I’m sure a robot wouldn’t want to, either!

Throughout her career, she’s flown on four space flights and clocked in over 978 hours of time in space (around 41 days). Just like Mae Jemison, Ellen Ochoa is a Stanford alum having received her Doctorate in Electrical Engineering. She also has four schools named after her, which is four more schools than most of us will ever have named after us; especially cool since she’s still alive! She’s also collected a mountain of awards and accolades from NASA, as though having the honor of being in a club that only about 500 other people are a part of wasn’t awesome enough.

Another really cool thing she did was the first docking to the International Space Station before the first crew arrived. That’s a pretty incredible feat when you think about it. The entire process of launching a vehicle into orbit to intercept a station traveling at 4.76 miles per second without crashing and exploding into a million pieces is pretty phenomenal. Then coming back to Earth without it happening on the way down!

Did I mention she was the go-to person to wield the robotic arm on the space shuttle? She retrieved several satellites using it. She also had the privilege of using the robotic arm on the space station to move crewmembers and the S0 truss into position. Remember trying to win the stuffed bear from the claw machine as a kid? Imagine that the size of a building and swinging people around in the void of space. Oh man, awesome. I want that job.

If you were wondering what she’s up to now, she’s currently the director of the Johnson Space Center in Houston Texas. Remember “Houston, we have a problem” (Worth noting, the actual quote was: “Ok, Houston, we’ve had a problem here.”), this is the Houston they were talking about. She’s the big boss of the whole space center, and the first Hispanic woman to have that job. Another first! Talk about climbing the career ladder.

She’s also a classically trained flutist, which I thought was an interesting tidbit worth sharing. It certainly adds a human element to a figure that’s accomplished such otherworldly feats, right?

I hope you’ve enjoyed this month of reading about all of these incredible women as much as I’ve enjoyed researching them for these articles. If nothing else, I’ve become totally inspired by the incredible acts these women have achieved, and I feel like I can go out there, get my hands dirty and accomplish anything I put my mind to. I hope you walk away feeling the same way, you deserve it!