The spell of the Yukon

Paddling 2,000 Miles from Source to Sea

“There are strange things done in the midnight sun

By the men who moil for gold;

The Arctic trails have their secret tales

That would make your blood run cold;

But the queerest they ever did see

Was that night on the marge of Lake Lebarge

— From “The Cremation of Sam McGee” by Robert Service.

The Yukon River begins in British Columbia, flows north through the Yukon Territory and then makes a large arc across Alaska through the wildest 2,000 miles left on the North American Continent. If something goes wrong, you are pretty much on your own with little or no recourse to rescue.  Certainly, there is no place like it in the “lower 48” states. 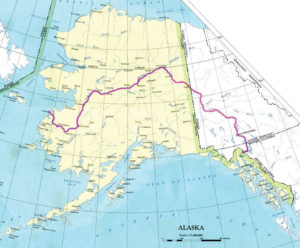 So Deb and I, naturally, just had to go north to Alaska and experience its wonders!

We found ourselves one night, literally, on the marge of Lake Labarge, around a driftwood campfire, with my dad and our friends Paul, Rick, Doug and Laura, reading aloud Jack London’s poems. Unlike Sam Magee, we were not after heat from the fire. Words and embers warmed our souls, connecting us to the ages. To travelers past. To those seeking gold in the Klondike Stampede. To Jack London himself. To my grandfather. To each other. Campfires hold timeless stories and secrets.

Our Yukon adventure had its roots in another campfire 30 years earlier. At age 10, on the banks of the Allagash River, I came to know my grandfather. He passed away before I was born, but my dad introduced me to him, feeding the campfire and telling tales about my grandfather’s experience in Alaska.

After World War I ended, grandad went to work for the U.S. Fish and Wildlife service and Alaska Department of Game in Southeast Alaska. For three years, he counted salmon, inspected canneries and visited native villages. He hunted, fished and explored.  In 1921, he spent the summer surveying the northern boundary of Mt McKinley National Park. Afterwards he traveled by steamboat up the Yukon River. At Dawson, he found men still working the Klondike Gold fields. The White Pass Railway took him to Skagway, 40 years before Alaska would become a state.

The dying embers from that Allagash campfire sparked an idea that grew as my dad and I shared other adventures and campfires. 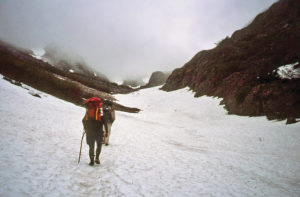 Hiking over Chilkoot pass in June.

These embers flared to life in the summer of 2000. My wife Deb and I set out to retrace the “classic” route of the Klondike Gold Rush as faithfully as we could. We left San Francisco on Amtrak, bound by train for Seattle, as did thousands of “Stampeders” in 1898 during the “Last Great Gold Rush”.

We met our companions and boarded the Alaskan ferry. Over three days we travelled the 1,000-mile Inside Passage, watching islands and fiords slide slowly by. Places that my Grandfather had lived and worked had changed very little. In Skagway, we got off the ferry and chased my grandfather’s ghost, staying in the same hotel where he had slept 79 years earlier.

At 32 miles long, the Chilkoot Trail crosses the coastal mountain range, a high barrier to the Yukon’s headwaters in northern British Columbia. During the Goldrush, Canadian Mounties required that stampeders entering Canada via Chilkoot Pass each carry a ton of provisions. This took months, crossing over the mountains 40 to 50 times, in winter. We decided it was OK to take some liberty with historical accuracy. We started in June not December and hiked the trail just once, letting the tourist railroad deposit our boats and supplies at Lake Bennett.

We paddled 96 miles across several headwater lakes, whose outlet creates the Yukon River. Then we travelled another 490 miles on the river, including the night on Lake Labarge, until arriving in Dawson City and the Klondike goldfields. Here, my dad departed to return home, having completed his trip of a lifetime.

I knew before we began that I would not be satisfied unless we paddled on to the Bering Sea. I admit to having a compulsion to see what lays on the other side of a mountain (or river) until they end. It’s a curse.

“There’s a race of men that don’t fit in, 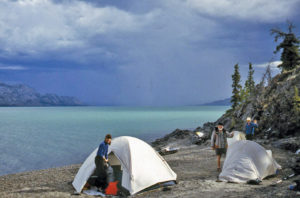 A race that can’t sit still;

So they break that heart of kith and kin,

And they roam the world at will.

They range the field and they rove the flood,

And they climb the mountain’s crest:

Theirs is the curse of the gypsy blood,

And they don’t know how to rest.”

-From “The Men that Don’t Fit In” by Robert Service

s we continued down the Yukon, our other friends left in stages, each pulled in their own direction. We waived goodbye to our last companions as we paddled under the Alaska Pipeline’s haul road, the only bridge crossing the river in Alaska. With 1,000 miles to go to the Bering Sea, we were now on our own. In some ways, the real adventure had just begun.

Western Alaska is Wild Country! Look at a map and see the sheer size and scale of the place. Note the blank spaces. There are no roads to the outside world. Athabascan and Inuit villages are small and often 100 miles or more apart. They can only be reached by small plane or boat.

The Yukon River has many moods. It ranges from a half mile to four miles wide. Floods carve new channels and banks each spring. Levels drop in late summer revealing new features. Islands and sandbars appear and disappear in each season, every year. The surface can go from mirror smooth to three-foot standing waves in minutes. Crossing this river means making a decision 10 miles upstream, before you can see the other side. The channel cuts through permafrost, keeping the water temperature well below 50F, so hypothermia is a real threat if a boat flips.

This is a land where mosquitoes hunt in hordes, not packs; where temperatures can go from 90F to snowing in a day or two.  We paddled for six weeks before we saw a dark sky. Most nights we watched sunset linger and slowly become sunrise. Yet, in just a few months, there would be nothing but 24 hours of darkness. Every time we stopped on shore, we found fresh tracks from moose, wolves and bears, but never humans.

Pulling away from shore after a lunch break one day, a grizzly sow and cub pushed their noses out from the willows on the bank above, maybe 40 feet away. From her puzzled look, we guessed she had probably never seen a human, much less a 19-foot long floating creature with two torsos and four arms and no legs. Whatever she made of us, she did not care.

Strong storms barreled in several times, with strong winds and heavy rains coming off the north Pacific, keeping us pinned down in our camp on exposed sandbars for a day or two at a time. 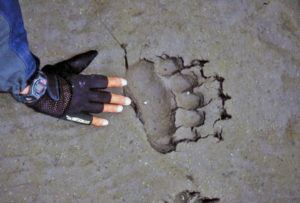 “We decided NOT to camp here – too fresh, too large and moving at such a gait that only the toes touched the ground/mud.” -Phil Hough.

We were alone, yet in a double kayak we, paradoxically, spent all day, every day, just 30 inches apart. We were even closer when storms would strand us inside a tent for a day or two. This trip was the ultimate in both solitude and close proximity to another person.

The daily encounter with each other and our own selves was as much a part of the discovery of the trip as encounters with wild beast or other cultures. You don’t know how you will respond when its 10 p.m. and after 14 hours of paddling, in the cold rain, you and your partner pull ashore on the only mudflat for miles that held any promise of a campsite, to find the fresh tracks of a grizzly whose print measured over a foot long.

Deb and I have trekked in Central and South America and have hiked America’s “Triple Crown” (The Appalachian, Continental Divide and Pacific Crest Trail) but I can think of very few places or times when I simply felt as “alive” as along the Yukon River. We were traveling very deliberately, living in the moment, not knowing what challenge, experience or insight the next hour, much less day, would hold.

As I stare at campfires now, my grandfather looks back and I see the same wonders of the Alaskan wilderness as he saw. My companions look back from the trips and campfires we have shared. My dad looks back from the many wild times we have had together and nods in silent satisfaction. And, I see the shared visions of many other wilderness travelers. Campfires connect us all as we wander across the ages and across the country that is wild and free.