Kootenai County District Judge Lansing L. Haynes heard cross motions for summary judgment April 26 in the case against the Festival at Sandpoint and city of Sandpoint, in which two private citizens allege that their constitutional rights were violated when they were denied entrance to the concert series in 2019 because they were carrying firearms.

That gun ban has drawn the attention of Bellevue, Wash.-based Second Amendment Foundation and Boise-based gun rights lobby group Idaho Second Amendment Alliance, which have joined the lawsuit along with the two North Idaho men who attempted to enter the Festival armed: Scott Herndon and Jeff Avery.

This is the second lawsuit challenging the Festival’s no-weapons policy on publicly-owned War Memorial Field. Haynes, the judge in the Herndon case, also presided over the Bonner County v. City of Sandpoint lawsuit regarding the Festival’s no-weapons policy, ruling in September 2020 that the county’s case against the city was “speculative” and lacked standing to bring the case before the court from the outset. 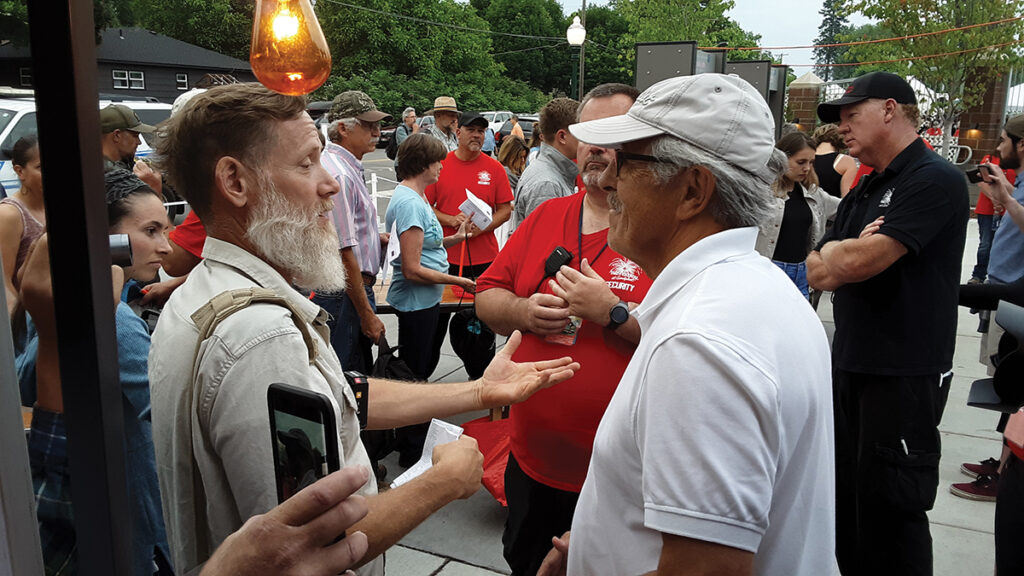 Scott Herndon, left, attempts to enter the Festival at Sandpoint gate with a firearm in 2019. Photo by Ben Olson.

Attorney and guns rights advocate Alexandria Kincaid, representing the plaintiffs, opened the hour-long April 26 hearing by reminding the judge that is was his obligation to issue a decision based on Idaho law, not on the laws of other states — states from which the defendants have drawn cases to support their argument, like California, New York and Oregon.

“Can the government in Idaho, can a city, can a county, contract away our citizens’ rights to keep and bear arms?” Kincaid asked. “Can they do that by leasing or permitting public land to a private entity that says, ‘We don’t want you to be able to defend yourself?’ That’s the question that is before the court.”

Upon filing the case, Herndon et al. alleged that in being denied entry to the Festival while in possession of firearms, their Second, Fourth and 14th Amendment rights had been violated. Kincaid shared at the April 26 hearing that the plaintiffs would no longer be making the Fourth Amendment argument, which deals with searches and seizures.

In a series of back-and-forth rebuttals peppered with questions from Haynes, Kincaid and Peter Erbland — of Coeur d’Alene-based Lake City Law, representing the city of Sandpoint — along with Festival attorney Arthur Bistline debated the application of Idaho’s concealed weapons code, which states: “The Legislature hereby finds that the people of Idaho have reserved for themselves the right to keep and bear arms while granting the Legislature the authority to regulate the carrying of weapons concealed.”

Because War Memorial Field is public land, plaintiffs argue the right to carry can’t be abridged. However, defendants argue that in leasing the property for two weeks each summer, the Festival assumes all rule-making ability, and the city has played no part in restricting firearms.

Erbland pointed out that the statute “should not be read in a vacuum,” making special note of the code’s subsection dictating that the law should not be used “to limit the existing rights of a private property owner, private tenant, private employer or private business entity.”

“To use the word ‘astonishing’ hardly goes far enough, because the very people who have conservative ideals and who champion the rights of individuals — now that it’s convenient, seem to have forgotten that private property rights must be championed or there is no society, there is no free society,” Erbland said.

He also noted that “courts do not make public policy, legislatures do,” and that if the plaintiffs wish to see Idaho law explicitly state that private lessees — or tenants — lack the right to restrict firearms, they should seek a resolution at the Idaho Statehouse.

Kincaid argued that the code is clear.

“The court can easily find today that the Legislature has spoken,” she said. “We don’t have to go before the Legislature. We have a law that says that these rights are protected for the citizens of Idaho.”

Haynes said at the April 26 hearing that he would take the arguments under advisement and soon issue an order on the cross motions for summary judgment.