Picture this: a dozen musicians decked out in bastardized versions of marching band costumes and stage make-up begin a funky groove. Stilt walkers come onstage with pole dancers trailing them. A horn section hits and the crowd cheers.

No, this isn’t the carnival. It isn’t an acid flashback. It’s MarchFourth Marching Band! 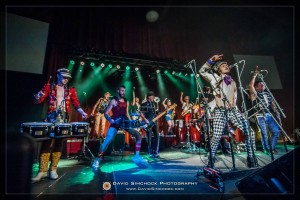 Featuring 13 musicians and four stage performers, MarchFourth! (or M4) has redefined the line between musical performance and stage circus. They’ve toured all over the world, and played with some big names like Fleetwood Mac, Ok Go, No Doubt, Galactic and Pink Martini.

For John Averill, bass player and bandleader, M4 is a continuously evolving experiment.

“We always have new people when we’re on the road,” said Averill. “It’s like a baseball team. We have a pretty unique roster, because not everybody can do every tour.”

The genius of M4 lies somewhere between the performance and the music, which is usually instrumental and genre-defying at its core. M4 retains influences from ska, rock, swing, hip hop, gypsy brass, klezmer, jazz and just about any other genre that gets people tapping their feet.

“We write our own material,” said Averill. “We have a lot of different people composing, so whatever is in their head, as long as it grooves, it doesn’t matter. That’s actually one of my favorite parts of the band; we don’t have a genre. We have the rock thing going on, we have the gypsy brass thing going on. We’re all over the place.” 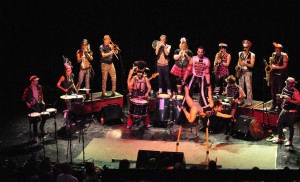 M4 consists of a horn section, including trombones, trumpets and saxophones, a percussion section, a bass and electric guitar, and a bevy of stilt walkers, acrobats, hoopers and dancers. The uniforms the band wears are mismatched and redesigned from traditional marching band uniforms of decades past. The percussion section’s drum harnesses are made from recycled bicycle parts.

Because they were formed on March 4, 2003, the band elected to call themselves MarchFourth Marching Band, since evolving into MarchFourth! or simply M4.

“We put the band together for a Fat Tuesday party,” said Averill. “The date of the party was March Fourth. We just named ourselves for the date of the party. We didn’t realize it at the time that it was going to be an ongoing thing. If I’d have known that, I would’ve given us a different name.”

Coming together in the Alberta district of Northeast Portland, M4 quickly began gaining notice from the eclectic crowds that Portland produces. The Willamette Week alt-weekly voted M4 “Best Local Band” in 2004, and they’ve been featured in everything from a smart phone television commercial to appearing as a marching band in Gwen Stefani’s solo album.

But of all the collaborations over the years, Averill said they had the most fun with New Orleans-based funk band Galactic.

“We recently collaborated with them and produced our newest record that we’re still working on now with them,” said Averill. “It’s been the most pleasant collaboration, along with Pink Martini.”

M4 will be returning to the Panida Theater for their third performance. The last performance came very close to selling out, so make sure you obtain tickets early. The electronic dance funk band Sepiatonic will be opening for M4, so make sure you show up early for the full experience.

“Expect the unexpected,” said Averill. “We’ve definitely got a high energy party that pretty much appeals to every demographic, from hipsters, hippies, kids, grandparents. We cross over really well and we try to involve the audience in the show.”

The fun happens Friday, Oct. 2 at the Panida Theater main stage. Doors open at 7 p.m. and the fun begins at 7:30 p.m. Tickets are available for $27 at Eichardt’s Pub, Eve’s Leaves, the Long Ear in Coeur d’Alene, and online at www.panida.org.