“It is the will of God that we must have critics, and missionaries, and Congressmen, and humorists, and we must bear the burden.”

Garrison Keillor’s “Prairie Home Companion” aired every weekend on 600 NPR stations with 4 million listeners since 1974, has become an icon of Americana. Keillor once tried to retired, but he failed, but he now says that he is serious about it. As they are now doing with Click and Clack the Car Guys, I hope they broadcast Keillor from the archives because I never tire of hearing his stories again and again. 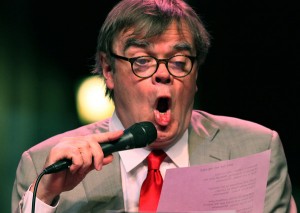 Sam Anderson describes Keillor’s humor as “polite, understated, and deliberately anachronistic; it never breaks a sweat. When he speaks, blood pressures drop across the country [and] wild horses accept the saddle.”

Keillor certainly has his detractors. Feminists complain about the lack of positive images of women. Instead there are housewives, who, during the long Midwest winters, draw the noose of Christianity so tightly around their men’s necks that they flee to their fishing shacks for days at a time.

There are also his babes, one of whom “wore a knit sweater and jeans so tight it looked as if she’d been poured into them and forgot to say ‘When.’ When she moved, she seemed to undulate under her clothes in ways that took a man’s mind off the state of the economy.”

Keillor also got into trouble with gay men when he described a pair of them as “sardonic fellows with fussy hair who live in an over-decorated apartment with a striped sofa and a small weird dog.”

Critics don’t realize that Twain and Keillor are equal opportunity satirists, who ridicule everyone, including themselves. Keillor’s put-downs of radio people—too clumsy and ugly to be seen on TV—are especially scathing.

Keillor is kinder to religion than Twain ever was. In typical self-depreciating style, he described his own faith on some days as “so small that it would take a microscope to find it.” He compares himself to the Prodigal Son of the New Testament.

Keillor’s subtle humor stands in contrast to his outrageous tales. Did you know that one of the Wise Men was actually a Lutheran? Archaeologists from Minnesota have now proved that myrrh is originally a hot dish from the Middle West not the Middle East.

One of my favorite skits is the one about cowboys Dusty and Lefty. Dusty is the one with a hard edge—preferring dance hall floozies and rotgut whiskey—but Lefty is the sensitive one who prefers to date librarians and drink a good Chardonnay. Lefty would have liked the cowboy in a New Yorker cartoon who reserved one of the slots in his cartridge belt for his lip balm.

Space does not allow me to retell my favorite stories such as “Truck Stop” about Florian and Myrtle Krebsbach’s ill-fated trip to a Minneapolis clinic.Sure, he makes fun of them—a bumbling old codger and his nagging wife—but in doing so he reminds us of our deep and common humanity.

Another hilarious tale is the one about 24 Lutheran ministers going on a ride on Carl Bunsen’s new pontoon boat.After being forced into the water by a blazing charcoal BBQ, the ministers—all in sodden turtle-necks, earth-tone corduroys, and hush puppies—are led to shore by a guardian angel, a small boy who knows exactly where the shallow water is.

There was a time in Lake Woebegon when the whole town would turn out for a special Fourth of July event. Inspired by a traveling cap salesman, the citizens would don various colored hats and shirts to make the Living Flag.

The problem was that person after person would break rank and climb the highest building to admire their amazing creation. Then some people ran home to get their cameras, and it just became a big hassle rather than a patriotic celebration.

Garrison Keillor makes us all proud to be Americans, and by cutting all of us down to proper size, he shows us the humility that should keep us from claiming qualities that we do not have.

Keillor is a superb anti-dote to American exceptionalism, but at the same time he is the best promoter of a unique America, a flawed but dynamic country of hard-working natives and immigrants with basically good values.

It is a country where “the women are strong, the men are good looking, and all the children are above average.”

Nick Gier taught philosophy at the University of Idaho for 31 years.