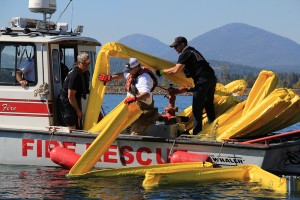 A little preparation goes a long way if the worst should happen. And for Sandpoint, “the worst” isn’t a huge exaggeration when it comes to a severe oil or coal train derailment.

Local authorities and BNSF Railway personnel know that full well, which is why they collaborated this week on a series of training exercises meant to ensure fast response in the event of a hazardous material spill. Between training sessions on Monday, Tuesday and Wednesday, members of Sandpoint Fire Department, Bonner County Sheriff’s Office, the Idaho Bureau of Homeland Security, the Idaho Department of Environmental Quality, Montana Rail Link, Bonner County Emergency Management, Bonners Ferry volunteer firefighters and more joined BNSF personnel to practice procedures for containing and cleaning hazardous materials.

The training sessions are an important proactive measure for all Lake Pend Oreille communities. After all, a major oil spill would be devastating for the local environment, to say nothing of lake- and tourism-dependent businesses or public health. That’s doubly true if train cargo should spill directly into lake waters.

That’s why local officials have been in talks with BNSF staff to develop a geographic response plan, or GRP, detailing the precise procedures needed for any accident regardless of scale, location or yearly season.

“That’s the whole idea of practicing [these procedures],” said BNSF hazmat manager Nic Winslow. “We want to reduce response times if something ever does happen.”

Tuesday’s efforts, for instance, focused on tackling water-based responses. Trainees gathered at Dover Bay Marina and City Beach throughout the day, deploying in boats to practice with environment-saving equipment. The weather offered up a sunny day and comfortable temperatures just for the occasion—circumstances Sandpoint Fire Chief Ron Stocking wishes would cooperate during real emergencies. ]

“We have ideal conditions to simulate this drill, which is just great,” he said.

Laying down containment booms—long, flexible barriers designed to stop oil from spreading—received special attention. After deploying from City Beach and arriving at the scene of the faux accident, they managed to lay about 500 feet of boom within 45 minutes. That’s pretty quick work, Winslow said, but the idea is for that to be even better in a real emergency.

The Bonner County GRP, which has been in development since last year, is a collaboration between several North Idaho counties as well as city partners. According to Lane, BNSF has been working with local governments to make sure they have all the information from the company they need. From there, it’s all a matter of identifying key areas within the region like critical habitats, sources of drinking water, important waterways and more. The also provide their supply of BNSF-owned equipment for county use during any emergency and pay for firefighters to attend a company training facility.

“It’s a hands-on example of how we build relationships with first responder communities,” he said.

The Bonner County GRP should be a lifesaver in a real emergency, Bonner County Emergency Management director Bob Howard said. He believes one of the greatest assets will be individual procedures for different weather and seasonal conditions. For example, when the lake is at low pool, the county suffers from a lack of usable boat ramps.

“Summertimes are easy, but wintertimes are a real challenge,” he said.

Of course, no one wants to experience an accidental oil or coal spill of any kind, let alone something that could be mentioned in the same breath as the Lac-Mégantic, Quebec, oil explosion that gutted an entire downtown and left 47 dead. However, local officials and BNSF staff are resting a little easier in the knowledge they’re at least well prepared.

“I think working with [local officials] has been a great experience,” said Lane. “You want that close relationship with the people in the action with you.” 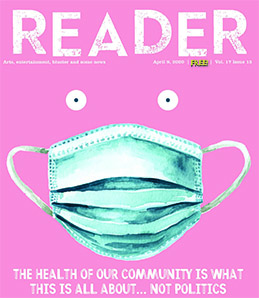