An estimated 10 million people visit more than 4,100 craft breweries each year. These impressive numbers point to a rising trend among hop-lovers: beer tourism. 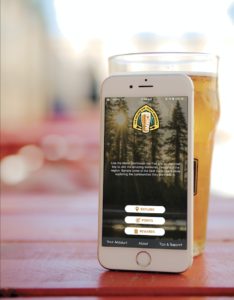 A screenshot of the Inland Northwest Ale Trail app.

The app, which can be downloaded free on Apple’s App Store and the Android market by searching “Inland NW Ale Trail,” uses location services to list breweries closest to you while traveling, and even gives rewards for every patron’s visit.

“Our intent is to say, ‘There are a lot of great breweries in the Northwest, but Seattle and Portland are getting most of the attention,’” said Dave Kosiba, president of the Inland NW Craft Brewers Association and owner of Utara Brewing Co. in Sandpoint. “This app helps us band together and promotes the industry in the Inland NW.”

For Andrea Marcoccio and Kennden Culp, owners of Matchwood Brewing Co. in Sandpoint, the app is another way to promote beer tourism in Sandpoint.

“We signed up to partner on that app during the development,” Marcoccio said. “We are in support of beer tourism. From the beginning, we’ve been saying that, ‘Beer floats all boats.’ The more people that come into town to check out all of our breweries — not just one of them — the more support comes to the beer industry.”

Kosiba said the app will replace a printed “Ale Trail” map, a popular guide for craft beer lovers to find new breweries around the region when traveling.

While the printed maps were popular among customers and brewers alike, the app will contain more features for customers, including a rewards system for each visit.

Another benefit of the app over the map is that when a new brewery opens, it won’t have to wait until the next printing of the map to be listed since it’ll be updated right away.

Kosiba hopes the app will help connect the craft beer community in North Idaho, in turn benefiting local brewers by giving them yet another way to bring the beer to the people.

“The whole idea is to have them have a really great craft beer experience and know where to go,” Kosiba said. “It’s functional and really cool.”