On the closing of Ivano’s

There’s a joke about Ivano’s Ristorante Italiano, a Sandpoint institution for 37 years:

Alas, no more. I enjoyed what was possibly a last meal at Ivano’s Friday before last. I enjoyed my “employee discount for life,” Jim Lippi’s gift to me when I left his employment once, though it was not for the last time. I came back to wait tables again, and there’s hope that Ivano’s might come back as well. Who knows? For now, though, the best restaurant I ever worked in is shutting down after almost four decades of lovely food and great service. 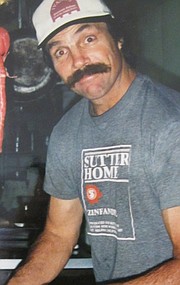 Ivano’s owner Jim Lippi was a familiar face around Sandpoint for many years. He passed away in 2016. Courtesy photo.

I’m not familiar enough with the whole history to give it here. But I hauled plates for the 25th anniversary of Ivano’s on Valentine’s Day of 2009. I never worked in the “old house” at Second and Lake, only the building at First and Pine. Ivano’s has been there now longer than it was at the other, but I waited on many who revered the house for good memories of good moments. Birthdays. New jobs. Retirements. Romances. Engagements. Marriages. Anniversaries. Even divorces. All were celebrated in the old house, and that tradition, myriad faithful customers and the Ivano’s crew followed the green, white and red flag to the new place in year 2000.

The man and woman carrying the flag were Jim and Pam Lippi. Ivano’s was their baby, and they raised their other babies in the kitchen. When Jim died in 2016, it left a huge hole in Ivano’s culture of hospitality, but the staff and family carried on in his best spirit. If I can define that spirit, it is, “Family first, community second — and treat the community like family.”

Ivano’s supported this community in any way they could; gave scores of kids a first job and helped dozens of local causes with donations, food, participation, space to meet — you name it. When Sandpoint Magazine started in 1990, Ivano’s bought the first ad. The Ivano’s Italian Open golf tournament funded scholarships for deserving kids who otherwise might fall through the cracks. Nearly every kids’ sports team in Sandpoint benefited by the generosity of the Lippis.

It’s sad to see places like Ivano’s and 41 South close because of a changing local culture. Whether we locals like it or not, Sandpoint is being gentrified, and often at our own choice. It’s hard to hang in there when the offer on the table is more — and much more — than a person ever dreamed their property, business or home might be worth.

I don’t know what solution there is to that except don’t take the first offer. If it’s someone looking to cash in on trends in town, you can probably hold out for more — much more. More simply, I would advise you not to sell. It may be too late for that, but consider it, at least. Sandpoint still needs people who love it. Like the Lippis loved it. Still love it.

As I walked to my car from that dinner at Ivano’s, a sound I know well came to me: an excited crowd cheering at Memorial Field. It was a sound of my youth, when Sandpoint was a much smaller town struggling to transition from timber to tourism. It carried through autumn nights to tell us that the Bulldogs had just done something great. Those who heard it knew what it meant. Community was at work. The men and women who ran businesses, taught school, worked in the woods, sold cars, pulled on the green chain, cut hair, hauled plates, whatever, were part of it, at the game or not. Like the Lippis have been part of it.

That sound and all it means gave me hope. People were at that game Friday before last who had never heard of Sandpoint five years ago, or ever thought they would live here. They were cheering for the Bulldogs, too. Hopefully, they came here to make a home and not a killing; not just to chase a trend, but to start something that will last. That’s what the Lippis did in 1984, and it changed our little town in many good ways.

Sandy Compton waited tables at Ivano’s for a dozen years, a “lifestyle job” that allowed him to pursue other interests, including his writing. His latest book is The Dog With His Head On Sideways, available at local bookstores and bluecreekpress.com/books.