‘Planting our crop’: The city of Ponderay makes its case for the Field of Dreams

When Ponderay voters go to the polls on Nov. 5, among the items they’ll be asked to consider is whether the city should institute a local option tax — levying 1% on all sales subject to taxation under Idaho Code “with the exception of hotels/motels and any sales receipts that exceed $999.99 in aggregate.” 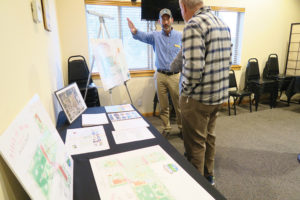 Remaining in effect for five years from its effective date, the LOT is geared toward two specific projects: the Field of Dreams park and regional recreational facility and a bike and pedestrian crossing beneath the Burlington Northern-Santa Fe tracks separating Ponderay from the Lake Pend Oreille shoreline.

“It’s the best option that the state allows for us,” Ponderay City Planner Eirk Brubaker said of the LOT. “It’s an opportunity for Ponderay to be a leader in Idaho — to show that we can do more with one penny than the state can with six, though that’s just my own opinion, not the city’s.”

Speaking at an Oct. 15 open house on the projects, Brubaker said revenue gathered from the tax would be used to support development of Phase I of the Field of Dreams — a long-talked about yet long-deferred multi-use sports and recreation complex envisioned on a 50-acre parcel east of U.S. Highway 95, west of McGhee Road and south of Bronx Road.

The project received a major boost in March 2018, when the LOR Foundation awarded the Field of Dreams a planning grant of $100,000, along with the potential for another $400,000 in support as its development progresses.

Now, Brubaker said, the time is right to start making the dream a reality with an incremental approach, developing the project in three phases.

“If Phase 1 is all that even happens — say there’s an economic downturn — Phase 1 has to be able to stand on its own,” he said.

Based on the current concept, Phase 1 includes four U11-U12 soccer fields/multi-purpose sports fields, six U6-U8 soccer fields/multi-purpose sports fields and one full-sized soccer field, as well as a large grassy open space on the southern half the property. In the center would be a structure containing restrooms, storage space, an area for concessions, offices and eventual locker rooms, as well as a pond and open space accompanied by picnic areas. The northern portion would consist mostly of nature and multi-use trails as well as a pavillion and wetland pond.

“This is not grandiose,” Brubaker said in reference to Phase 1, underscoring that site planning includes flexibility between phases, depending on the availability of funding.

“It’s really something we could grow into as people buy into it,” he added.

Area resident Christie Coskie is skeptical. She lives in a municipal gray area — while she has a Sandpoint address, she lives within the Kootenai area of impact. Her neighbor across the street lives in Ponderay.

“It’s frustrating because it’s going to be right down my street and I can’t really do anything about it,” she said. “I’m not against it, but I feel like it’s poorly planned. … It feels premature to be voting on it right away.”

Coskie’s big beef has more to do with the size of the proposed development and how much it will cost to maintain going forward.

“From what I’ve seen, people in general think, ‘Oh, it’s going to be this little park for the kids.’ They don’t realize the scope of the project. The scope seems very out of proportion with how many people live in the area even with projected growth,” she said. “They’re planning on 11 soccer fields. Do we really need 11 soccer fields in Ponderay — how many of these facilities already exist in the area?”

Brubaker said there’s a need for more soccer fields, pointing to instances in the past where tournaments have been turned away for lack of space and field conditions have made early-season play impossible. That’s part of the reason why initial plans call for artificial turf on the sports fields.

Brubaker said the consultants who are working with Sandpoint on its parks plan toured Ponderay’s parks to advise on what facilities are needed in an area-wide context. What’s more, he added, regional planning was a condition of securing the LOR grant last year.

“This is a regional facility that provides something new,” he said. “It’s an opportunity for Ponderay to have something very unique.”

According to the plan, the Field of Dreams will build in complexity over the course of its phases — a process that Brubaker said is better thought of as a 20- to 30-year plan.

Phase 2 would add baseball fields, an amphitheater, tennis court, four pickleball courts, two sand volleyball courts, a playground and indoor turfed field house. By Phase 3, the project would grow to include additional picnic areas, an expanded field house and event center as well as an indoor hockey and pool.

“Not only is Phase 3 kind of grand, it fully utilizes that 50-acre site,” Burbaker said, while noting that “the city has no commitment to funding this” in its entirety. Rather, user groups and other area municipalities would help share the burden of development over the years — a burden that Ponderay has had to bear disproportionately due to the state formula for disbursing sales tax revenue to cities.

According to Brubaker, while Ponderay is a major generator of sales tax revenue to the state, it receives only a fraction of the benefits because it is reapportioned based on population.

“While we may send $20 million to Boise, we get back $120,000,” he said. “The system disproportionately burdens a city with our kind of makeup.”

That makes it hard to invest in capital projects like the Field of Dreams without dispersing the source of funding regionally and growing it over time, which Brubaker said is exactly what the LOT is intended to do.

The city of Ponderay and Friends of the Pend Oreille Bay Trail will host an open house on the proposed Field of Dreams and railroad underpass projects on Thursday, Oct. 24 from 5-7 p.m. at the Ponderay Event Center, 401 Bonner Mall Way.