When Matchwood Brewing Co. owners Andrea Marcoccio and Kennden Culp opened their doors a year ago in Sandpoint, they had dreams that their brewery would be more than just a place to grab some great craft beer and tasty food, but a hub for the community. 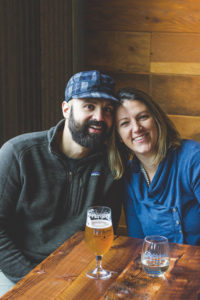 Kennden Culp and Andrea Marcoccio, a few days before opening the doors at Matchwood in 2018. and Courtesy photo.

“I think it’s been everything we expected,” Marcoccio said. “Exciting, energizing, exhausting, but also really engaging and fun.”

Marcoccio said she’s been humbled by the support Matchwood has received in its first year.

“Sandpoint is a community that shows up for folks that put themselves out there and we feel lucky to have that local base,” she said.

The aesthetic at Matchwood is open, airy, non-pretentious. Solid wood tables and bars greet customers, with an open-concept kitchen to the left and larger rooms on either side of the building on the second floor. Outside, a covered patio and outdoor firepit area wrap this treasure in a warm, North Idaho embrace. The staff greets you with a smile and always seem genuinely happy to see you.

There’s a reason the Spokane-based Pacific Northwest Inlander recently voted Matchwood North Idaho’s “Best New Brewery.” Matchwood’s beer runs the gamut of flavors, with everything from its crisp sparkling ale to the dark chocolate milk porter. All varieties are brewed with care and attention, using local ingredients when possible, as with the spruce tip pale ale, brewed with hand-picked spruce tips from a local Sandpoint farm.

Marcoccio said Matchwood is currently working on partnerships to distribute its beer at a few locations around the region, including Schweitzer Mountain and Eichardt’s Pub.

“We’ve got a tap in Eichardt’s, which was our first tap handle in town,” she said. “They’re the soul of Sandpoint when it comes to the pub vibe, so we were honored to put that beer on there.”

Another leg of Matchwood is its eatery, which features homey, comforting food done right. Whether it’s shareables, like snack boards, or the sinfully good deep-fried mac and cheese bites or regionally sourced salads and handhelds, Matchwood’s food offerings are great for a bite with friends or a full-blown dinner with the family.

The change of season brings a new fall menu for Matchwood, with several new items based on feedback from the community.

Another new addition is the Sunday Brewery Brunch, which Matchwood hopes to launch in November.

“It has been very successful in other communities,” Marcoccio said. “We noticed people like to come in on Sunday afternoons — maybe they were really productive on a home project or had just gone on a big hike. … It will include the very popular do-it-yourself mimosa bar we launched at the K9 Keg Pull last year and couldn’t keep up. Sandpoint has spoken.”

Along with craft beer and food, Matchwood also offers its space as a community center for a variety of functions.

“We’ve held well over 300 events in our first year,” Marcoccio said. “Maybe even closer to 350. Sometimes it’s two or three events a day. It’s been women knitting and saving seeds from the garden to nonprofit fundraisers, birthday parties — it’s been the gamut.”

Marcoccio said the community center aspect of Matchwood is important to her and Culp, since it’s a great way to connect with the community on a daily basis.

“A good example is this Thursday’s Mission43 event, which is a nonprofit organization in southern Idaho whose mission is to help veterans get employed,” Marcoccio said. “We’ve already got 115 people who have RSVP’d to that one. We love events like that one.”

Matchwood will also be throwing an event of its own: A one-year anniversary celebration will take place Saturday, Oct. 19 from noon-9 p.m. There will be live music from noon-2 p.m. with Alex Cope and Chad Patrick, 3-6 p.m. with BareGrass and Coeur d’Alene-based group The Powers from 6-9 p.m. Matchwood will host a brew-to-table Makers Long Acres pig roast, raised on the brewery’s spent grain and smoked outside for 24 hours. Matchwood will also be releasing a special anniversary beer, with a community toast scheduled for 4 p.m.

While Matchwood is a big building full of life, Marcoccio said it’s important to cherish the small things that make the place special.

“Last year, we decided to be open on Christmas Eve,” Marcoccio said. “It was Kennden and I and folks that wanted to show up. I think we were the only place open in Sandpoint that night around 8 p.m. and there was this family that came into town to see their daughter. All they wanted was a Christmas tree, so we pulled ours off the display and gave it to them. It was Christmas Eve, so we didn’t need it anymore. They walked out the door with two growlers, a tree and a smile and they were in tears. You’re not expecting to solve some huge crisis, but it’s nice to reach people like that. That’s what we’re doing this for.”