Officials with Reclaim Idaho have asked the state to issue a revised financial analysis of their updated ballot initiative language, a state official said.

The initiative, which would boost funding for K-12 education, hit a snag earlier this week when the state released a fiscal impact statement, as required by law, that did not align with the updated ballot initiative language.

The office of the Idaho secretary of state received the request for revisions the afternoon of June 15 and hand-delivered the updated ballot initiative language to the Division of Financial Management to complete the analysis, which is called a fiscal impact statement, Deputy Secretary of State Chad Houck told the Idaho Capital Sun.

As a result of this issue, Houck said the Secretary of State’s Office has changed one of its policies and will ask legislators to consider changes to Idaho law to help prevent similar issues in the future.

Houck and Reclaim Idaho co-founder Luke Mayville said they are happy all sides are coming together to quickly work out a path forward.

“We are pleased that we are able to work with the Secretary of State’s Office and the Division of Financial Management to resolve this issue,” Mayville said in a written statement. “We’re expecting an accurate fiscal impact statement to be produced within the next 48 hours.”

How did the ballot initiative issues begin?

The issue involves a ballot initiative that Reclaim Idaho officials hope to get on the 2022 ballot in Idaho. 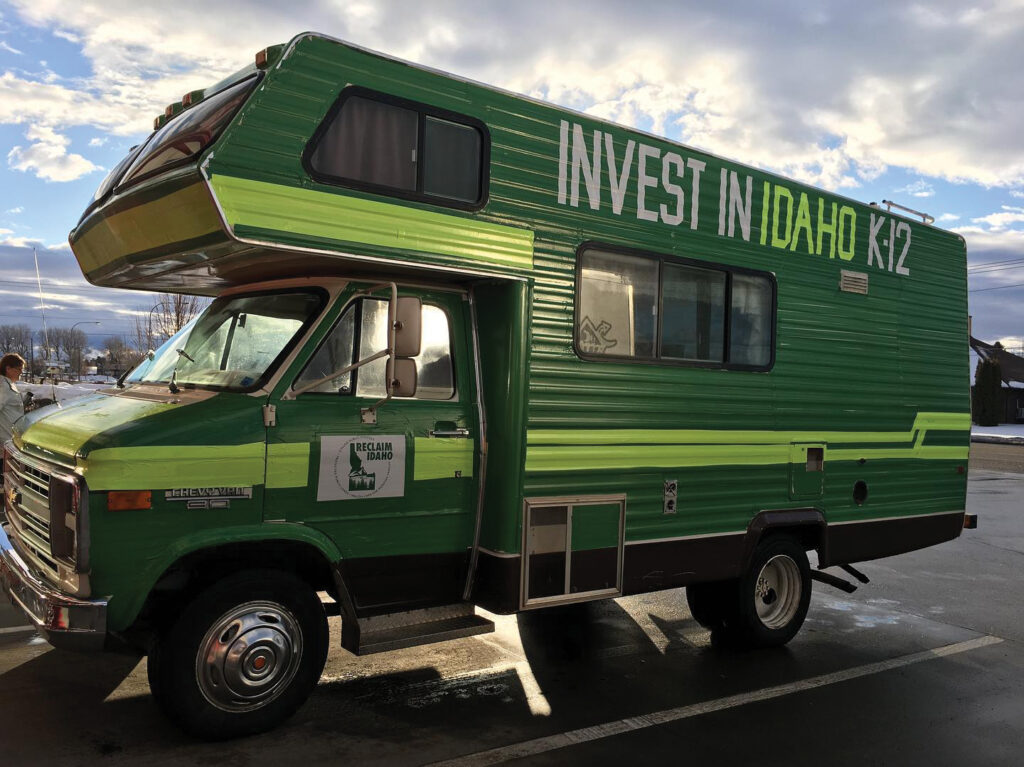 A law passed by the Legislature in 2020 requires ballot initiatives to include an independent fiscal impact statement produced by the Division of Financial Management.

“The information received from the Office of the Secretary of State to proceed [collecting signatures] was premature,” Carrero wrote in an email June 11.

The Division of Financial Management did release a fiscal impact statement for Reclaim Idaho’s original ballot language on the afternoon of June 14, as outlined in Idaho law.

But Reclaim Idaho had updated its ballot language based on the passage of a new law, House Bill 380, which the Legislature passed this year, making several changes to income tax brackets and rates.

That meant that the fiscal impact statement didn’t match the new ballot language Reclaim Idaho was moving forward with in its signature gathering campaign.

As a result, the fiscal impact statement showed passage of the ballot initiative would increase taxes at a much higher rate than Reclaim Idaho officials wanted.

What caused the confusion?

The Secretary of State’s Office attempted to mail the Division of Financial Management a letter on April 29 requesting a fiscal impact statement for Reclaim Idaho’s education ballot initiative. The letter came back undeliverable. That mailing error ultimately resulted in the timelines for the ballot initiative’s review for two different parts of the state government getting out of sync, Houck said.

“One hundred percent, completely,” Houck said when asked if failure to have the letter delivered was responsible for most of the confusion. “It was the breaking of those synchronous timelines.”

In other words, two separate state reviews were now on different tracks.

While the Division of Financial Management was responsible for the fiscal impact statement, the Idaho Attorney General’s Office was completing a separate certificate of review of the ballot initiative, which is outlined in Idaho law. That process involves reviewing the initiative for form and style and what the state calls “substantive import” and recommending revisions or alterations.

Mayville said the Attorney General’s Office review flagged the passage of House Bill 380, which changed income tax laws and brackets. That bill had been introduced April 21, a few days before Reclaim Idaho filed its ballot initiative April 28, but it was not passed and signed into law until May 4. The new law also had a clause making it take effect retroactively on Jan. 1, 2021, whereas a typical new law would not take effect until July 1.

Based on the AG’s review, Reclaim Idaho officials made revisions to the ballot initiative to reflect the law’s passage. One of the biggest changes Reclaim Idaho made was to reduce the number of tax brackets in their initiative from seven to five, in line with H.B. 380, and then add a new tax bracket for individuals making more than $250,000.

However, the Secretary of State’s letter requested a fiscal impact statement on the original ballot language submitted, not the updated language.

Houck said state officials and Reclaim Idaho organizers found themselves in an unusual situation because the law does not address what happens when organizers of a ballot initiative make changes following an Attorney General’s Office certificate of review. The law simply states the Secretary of State “shall immediately transmit a copy of the petition” to the Division of Financial Management to complete the fiscal impact statement.

Division of Financial Management Administrator Alex Adams said this is the seventh fiscal impact statement the division has prepared since the 2020 law took effect.

“While time consuming, I’m proud of the work of our state economists in using the best available evidence to develop accurate fiscal notes within the time constraints imposed by law,” Adams said in a written statement Monday afternoon. “We believe these fiscal impact statements will help voters as they consider the merits of future initiatives.”

Houck told the Idaho Capital Sun the Secretary of State’s Office no longer mails out requests to the Division of Financial Management for a fiscal impact statement because of the problem with the letter being returned undeliverable in this case.

“That is why we are delivering all those by hand,” Houck said.

He said the Secretary of State’s Office made the policy change “as soon as we got one back [returned undeliverable].”

“It’s the only time it’s ever happened,” Houck said. “At that point, we had no idea that would eventually lead to this conversation where we are now.”

Houck also said the Secretary of State’s Office will recommend legislators review laws dealing with fiscal impact statements. The law doesn’t address what happens if the two review timelines are broken and it “gives no clear indication” to provide a new fiscal impact statement if the ballot language is updated or revised.

“It’s definitely something we need to take a look at from a statutory standpoint,” Houck said.

As for the Secretary of State’s Office giving Reclaim Idaho the go-ahead to begin collecting signatures, Houck said, “That was a clerical error on our end and that is why it was addressed immediately.”

Given all that, Houck said he is happy the parties agreed to resolve the issue.

“This ultimately is the best resolution we could have come to, especially given how small of a timeline we were looking at to address it,” Houck said. “Here is what we’re trying to make happen; we’re asking Mr. Mayville for an advancing of trust, if you will.”

This story was produced by the Idaho Capital Sun, an independent, nonprofit online news organization delivering in-depth coverage from veteran Idaho reporters on state government and policy. It has been edited for length, with the full version online at idahocapitalsun.com and sandpointreader.com. The Idaho Capitol Sun is part of States Newsroom, a national nonprofit funded by tax-free donations in 22 states. Learn more and follow daily updates at idahocapitalsun.com and statesnewsroom.com.