You’ve only just released your latest studio album, Black Sheep, last month. How does it feel to have a major project completed and available to the public?

It’s great. We were waiting anxiously for the release date of this record and purposely not playing the material live and now we’ve been able to play it for the past month. And we’re really quite proud of the new record, too.

Is that a standard policy to wait until a record is released before playing material from it? 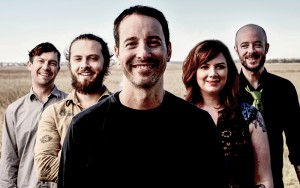 No, we’ve never done that before. I think like a lot of people our age, we are short attention span kids, and so as soon as we have a song that’s finished  enough to be played … we’re looking to play it live. But something about this project made it feel like the right decision to hold off play it live … and looking back on it now, I think it was the right call. I think it’s kind of nice for fans to have their first listen be of songs they haven’t heard live before. It’s a true Christmas morning experience.

Tell me a little about the process of putting this album together. Were there any particular events or circumstances that inspired its creation?

Well, this was the first record Yonder made following one of our original members [Jeff Austin] leaving the band. That was definitely a big event, although I’m not sure if we covered it in the album at all. We try to write what we know, which is relationships, life on the road and also a pretty groovy R&B love song on there called “Love Before You Can’t,” which is currently my favorite song on the record. … We didn’t sit down to explore any one theme in particular.

Speaking of those personnel changes, how is the band holding up as a cohesive group in light of that?

We’ve been a year and a half since that change. The band now feels like a tighter band than it ever was. We have two new musicians come on board—Jake Jolliff and Allie Kral—and we’ve reached the point where we can play all the old material, we’ve got new material, everybody’s really starting to intuitively understand how to perform with each other. Now the exciting part is all the things you can only do as a band after you’ve had a lot of gigs playing together. That’s especially true for a band like us, where there’s a heavy improvisational emphasis. …There’s just no substitute for logging the musical miles together. Now it’s all about finding those wide open improvisational spaces within the band, because that’s something that, musically speaking, is very exciting.

It’s interesting that you bring that up, because on this album during those instrumental interludes in the songs, it does feel like a musical conversation is happening between the members. How did that process sort itself out as you were recording the album?

A lot of those spaces that you’re talking about were recorded live, so it very much was a conversation. Everyone is their solo sections were free to improvise as much as they want … but a lot of the best moments happened when we were all standing around a microphone playing together. We’d just set up and play very much live experiences. It’s especially exciting because when the record was being made, we were just starting to perform with Jake and Allie. When I listen to the album, I can see the beginnings of what the project was going to become, and that’s pretty exciting for me.

The album is full of originals along with a cover of The Buzzcocks. “Ever Fallen In Love,” which I thought was a fun choice. Were there any other bands that you turned to for inspiration on this album?

Our original influences were the alternative bluegrass bands of the previous generation. John Hartford was always a big inspiration. So were the Kentucky Colonels. But as Yonder has gotten older, our influences tend to be outside of bluegrass. I can see from a couple members of the band the influence of punk rock manifesting in their songwriting.

There’s such a similarity between bluegrass writing and punk rock writing. You can’t just overlap them completely, but there’s a relationship that I think bears exploring, and it always becomes so clear that there is such a strong relationship when we start learning and playing punk rock on our instruments. It just fits so easily … and I wouldn’t be surprised if that influence continues to manifest. We always like how direct lyrics are in punk rock. There’s no pretentiousness there.

Now that the work is done on the album, you’re on tour again. How does it feel to be back on the road?

It’s great. You know, I’ve spent half my life on the road in vans, tour buses, airplanes, and it’s very familiar. People who are called to be touring musicians are a unique breed of people, and home away from home is your bunk on the tour bus. It’s just great to be able to play music, and at the end of the day, that’s why we do this. There’s something very special about playing live—an energy that just doesn’t exist anywhere else. It’s one of the great highs that you can have, especially when it goes really well, and these days, things are going really well. It’s easy to have a good time and reach those high places when things are in alignment.

… In my opinion, Yonder Mountain has never sounded better than we do now, and in some ways, we’re just scratching the surface. Looking through my emails, and one came through today that said, “Alright guys, start making the new record.” I kind of laughed. Didn’t we just make a record? But I think the intention behind it is once you get a good energy flowing, you want to keep it going. As happy as I am with “Black Sheep,” I just have to believe that the next one is going to be better, and it makes sense to strike while the iron is hot.

Well, The Hive is a great venue and I’m sure you’re going to get an energetic crowd. Looking forward to seeing you!

We’re really looking forward to it, and we’re glad this opportunity came up to see this new place, meet some new people, have a new experience. That’s one of the reasons we do this.

Catch Yonder Mountain String Band at the Aftival Concert Series at the Hive in Sandpoint, Idaho, August 8. The show starts at 10 p.m. For more information go to www.LiveFromTheHive.com