How many ghosts can one town have? If strange things occur when no one else is there, does that mean you’re possibly insane or that you aren’t really alone? If a group of people experience the same supernatural occurrence, does that validate it? Why do some spirits move on and others stay?

I will be answering none of these questions for you, dear reader. I am only here to share stories and perhaps to create a believer or two.

This is the story of a local hangout. They serve delicious tapas and the most amazing basil lemon drop martinis in town. I’m writing, of course, about La Rosa and the spirit who lives there. 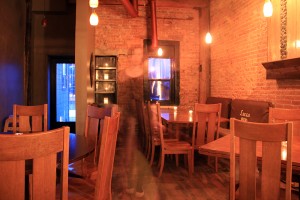 The back room where “Paul” is reported to hang out. Photo by Ben Olson.

The staff at La Rosa call him Paul. He’s the customer who never leaves. When there are no other customers around, and the restaurant is silent, Paul’s presence becomes palpable.

The building itself, the Fidelity Trust Building, was the first permanent building in that part of Sandpoint. It was built in 1909. Originally a real estate and newspaper office, it has also been a hippie clothing store, a plant store, a second hand store, upstairs apartments, a hotel, and most recently, La Rosa Club.

While Paul can sometimes be seen walking past the kitchen window while the La Rosa is open he generally saves his antics for the staff.

One night, after hours, Nolan the manager, and Tim the bartender, were closing up. Most of the lights had been turned off, including the ceiling fans. Suddenly, the fans started spinning. They stopped. Then started spinning the opposite way.

Paul also likes to invite other spirits to his soirees. One day, before the Club was open, chef Dylan was oiling the chest in the dining room. He began to hear a “full on” party in the bar. He walked into the other room to investigate the footsteps and laughter, but found he was still alone.

Another time, Dylan was in the basement (which is definitely one of the creepiest basements in existence) and heard footsteps above him. He was the only person in the building.

Dylan gave me a tour of said basement and I would not be surprised if there were several ghosts living there.

Perhaps Paul goes there for the same reasons I do. (They really do make the best martinis).

Of course, Paul may have other business that was left unfinished and he can’t seem to let the building go. Maybe he’s only there because he wanted to have a story in the Reader.

If you’re curious enough, go check out La Rosa Club for yourself. Order some tapas and a drink. And don’t forget to tip your bartender or they might sic Paul on you.