When U.S. Army Corps of Engineers officials visited the Springy Point Campground in Sagle this past spring to perform a regular facilities check, they came across an unwelcome surprise in the outhouse on the Springy Point peninsula.

During inspection of the toilet, which was last pumped in 2018, USACE staff reported that the vault was full again and ready to be emptied. Officials dispatched septic services, and a contractor took a barge to Springy Point. USACE Chief of Natural Resources Taylor Johnson said the septic company found the waste inside the vault was “rock solid.” 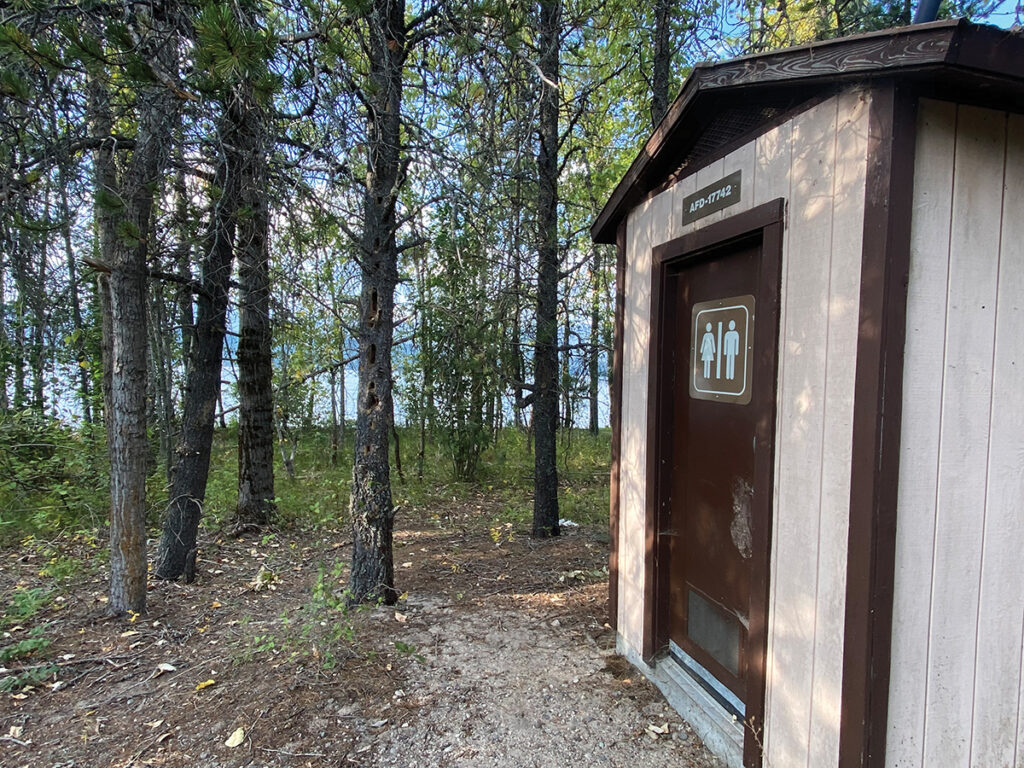 The outhouse at Springy Point across the Pend Oreille River from Sandpoint. Photo by Lenny Hess.

“When the contractor stuck his hose down there, there was nothing to pump,” he told the Sandpoint Reader. “He hit hard, solid stuff.”

What caused the waste to harden is unknown, as the regular maintenance schedule for the site dictated it be pumped every two or three years. However, one thing is certain: the current Springy Point peninsula toilet is locked, and will eventually need to go. What happens after that remains a debate between USACE and the public.

For the Corps, Johnson said the best option is to eliminate the facility — which was built in the 1980s — rather than attempt to use a backhoe to remove the waste.

“After consulting with our environmental team and [the Idaho Department of Environmental Quality], they found it was best to spread lime over the top of it and let it deteriorate into the vault,” Johnson said.

To accomplish that plan, the outhouse and toilet would be removed, the top of the vault pit exposed and lime sprinkled over the solidified contents, which would be eaten away over time. A large mound of dirt would also be placed over the vault.

“Over time the dirt would fill in that void, so there’s no safety hazard, and we’d just let the area go back to its natural state,” Johnson said. “The only thing remaining would be the [buried] concrete vault tank.”

The Corps’ decision is based on factors ranging from the environment to finances to a simple matter of access. Johnson said a portion of Idaho Code prohibits the Corps from constructing a new facility at the site “due to restrictions requiring a 50-foot buffer to standing or interment water.” Meanwhile, the $2,500 cost to barge over a septic company to pump the outhouse — which is only accessible by boat due to surrounding landowners refusing access by land — is the maximum amount that USACE is allowed to spend on a single service.

Another big factor in the Corps’ decision to eliminate the outhouse is consistent disrespect of the property by the public, Johnson said.

“[It] has become this nuisance property for me and my staff to manage, as far as people going out there partying, camping, building illegal fires, defecating all over the place,” Johnson said. “Even when the toilet was serviceable and open, people don’t want to use a pit toilet … People would much rather, in our experience, go to the bathroom on the ground than go into a vault toilet.”

Johnson said the recently updated shower and restroom facilities at the Springy Point Campground — just across the bay — are available for day use.

“We can hold people accountable, keep the area clean, but also save taxpayer money by not duplicating something that’s already offered just a 100 yards away,” he said.

Meanwhile, some members of the public argue that Springy Point peninsula — which is seeing more use than ever — needs its own restroom facility.

Steve Holt, executive director of Lake Pend Oreille Waterkeeper, has been in contact with Johnson about that need. LPOW, which advocates for protecting the lake’s water quality, is of the opinion that without a proper outhouse, the messy situation at Springy Point will only worsen.

“This is an incredibly beautiful and accessible piece of lakeside property and a destination for many local boaters,” Holt wrote in an email to the Reader. “If they are allowed there, which legally they are, not having a properly maintained facility only creates a toxic environment, is a source of pollution to Lake Pend Oreille and a hazard to swimmers.”

Holt also cited Idaho DEQ guidance, which states that “to preserve the quality and beneficial uses of the waters of the state of Idaho, it is preferable to have toilet facilities available at recreational areas that attract a large number of users.”

“We understand that the issue is complex, and can sympathize with the Army Corps of Engineers’ expense of administering and maintaining a facility in that location,” Holt wrote. “However, I hate to say it, but if a publicly funded federal agency who develops and runs some of the largest infrastructure projects in the world can’t figure out a way to maintain a vault toilet where it’s really needed, maybe we’re all in trouble! In all seriousness, there is a viable source of funding available for the installation of a new facility and all that’s needed is a bit of cooperation between a few stakeholders and the issue could be resolved.”

Johnson maintains that there are too many factors pushing USACE to put the Springy Point peninsula outhouse to rest.

“There are a lot of opportunities available, but it’s not something that we’re really interested in pursuing because of all these other reasons like trash, littering, the fact that we have facilities otherwise, the cost to operate and maintain the place,” Johnson told the Reader. “This is the best option for the Corps and the public, in my opinion.”

LPOW and USACE officials are slated to have a meeting on the issue Friday, Sept. 25. Those who wish to contact Johnson and his staff at USACE can call 208-437-3133. Reach Holt at [email protected]