They’re a roots-rock band from Maine that’s found success in the PNW, and they’re here next week

When Jason Spooner mentions his touring adventures in the Pacific Northwest, he doesn’t just say he likes Sandpoint. He recounts playing gigs on the shores of the lake, performing at a Halloween party on Schweitzer Mountain and jet skiing on a day off — a memory he recalls as “one of the best days of my life.”

“It’s such a beautiful and spiritual part of the country,” he said about North Idaho. 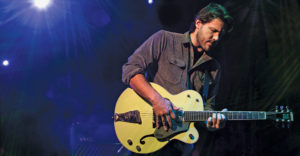 Jason Spooner is the front man of Portland, Maine’s Jason Spooner Band: Spooner on guitar and harmonica, Adam Frederick on bass, Warren McPherson on keyboard and Dan Boyden on drums. They play the 219 Lounge March 15 from 9 p.m. to midnight.

Spooner, who has been recording and touring intermittently for over a decade, made it clear that he and his band mates are no spring chickens.

“We’re old bastards,” he said with a laugh. “Truthfully, we’ve been doing it for a long time in terms of just how long our career has been, (but) in terms of our tour schedule, we have a pretty nice work/life balance.”

Spooner said one key to finding that balance is traveling to “spectacularly beautiful places with enthusiastic audiences” — places like Sandpoint, he said. It helps that the band has found success in the west thanks to a connection with a PNW record promoter and lots of radio play.

“Driving down the Jersey turnpike feels more like a job, but when we cruise across Montana or across Lake Pend Oreille on a jet ski, it feels like we’ve made a good decision,” he said.

While Spooner said he typically sticks to “roots-rock songwriter” when describing the band’s genre, he said it’s more of a “gumbo” thanks to each musician bringing in their own influences.

“Unlike a lot of other bands who architect what they want to be, with this band it happened like a musical science experiment,” he said. “Throw in a rootsy songwriter, mix it with a drummer with influences in funk, add a bass player with jazz leanings and a (keyboardist) from Jamaica with reggae in his blood, and classical influences, too.”

The result is a constantly evolving sound, Spooner said. He said acquiring a private recording space in April 2017 has only furthered that evolution, and allowed for each band member to help write new tunes.

“It’s a more collaborative effort these days,” he said. “It’s actually one of the most creatively inspired times we’ve ever had.  This is when you anticipate a lot of future regular record making and touring as a result.”

Sandpoint is just the third stop on the band’s western U.S. tour through Washington, Idaho, Montana and Wyoming. Spooner said the crowd at the 219 can expect the band to be fresh and fired up.

“Sandpoint has a special place in our hearts,” he said.

Check out the band’s most recent album, “Chemical,” through iTunes, cdbaby, bull moose or Spotify.