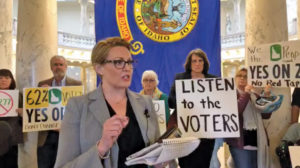 A still from a Facebook Live video Wednesday in which Reclaim Idaho executive director Rebecca Schroeder addresses a crowd at the Boise Capitol building.

The Idaho Statesman reports that Rep. John Vander Woude, R-Nampa, introduced the bill Monday, which then received a hearing Wednesday. After hours of testimony from activists, medical professionals and affected citizens opposed to the additional requirements, the Idaho House Health and Welfare Committee advanced the bill to the floor, albeit without a recommendation that it be passed.

Included in the bill are requirements that Medicaid beneficiaries work at least 20 hours a week or be enrolled in education or training programs. It also stipulates that those with incomes between 100- and 138-percent of the poverty line purchase private insurance.

Critics of the proposal say the bill would simply create “sub-gaps,” locking a certain set of Idahoans out from Medicaid and private insurance alike.

“This bill fundamentally changes the will of the people who voted to expand Medicaid from zero to 138 percent of the Federal Poverty Level,” said Brian Whitlock, president and CEO of the Idaho Hospital Association. “This bill changes the good intent of that ballot measure, and I think at the end of the day, you will find that it creates more bureaucracy, not less. It will cost more, not less. And, it will do bad things to good people.”