What the heck is that thing?!

Worry not, for you gaze upon the majesty of the naked mole rat, one of the wildest, weirdest and most wonderful critters in the whole wide world! 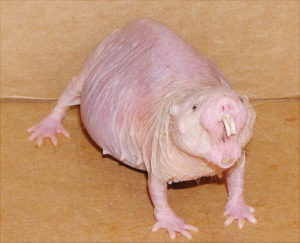 Despite being more closely related to guinea pigs than rats or moles, they don’t behave anything like any of those. In fact, these weird little guys are ectothermic (cold-blooded) like reptiles. Because of this and the fact that they’re subterranean, they are extremely social creatures. You won’t find them gallivanting about at any hoity toity socials or galas, however. You’re likely to find them huddled into a weird writhing mass that, should you be digging into the ground when you find them, could be mistaken for some kind of portal into the nether.

The fact that they look like your weird uncle Danny at the spa isn’t the weirdest thing about them. Heck, I’m not sure I could peg down what the weirdest thing about them even is. They’re cold-blooded mammals that breed like insects, with one queen mole that sustains unit’s population. Should any up-and-coming female start getting frisky with male breeding stock, the queen will go full Lannister and bully, intimidate or even kill her rivals to maintain her status as queen and matriarch. And just like a Lannister, is likely to get a little wild with her brothers.

What? That’s in the first episode, it’s not a spoiler!

On top of taking after ants reproductively, their social castes are very similar to ants as well, having workers that are delegated certain tasks depending on their size. Smaller workers maintain their tunnels and build new ones while the biggest workers become the first and last line of defense against predators. Think of the Cleglanes to the Lannisters: big brutish warriors, except they’re also the first to die. I guess that makes them more like the Night’s Watch, which makes sense as all but a few males in a colony are incapable of reproduction.

I bet you never thought you’d be see weird naked rat monsters being compared to your favorite TV show or book. Don’t worry, witches and warlocks, you won’t be spared, either.

Much like Lord Voldemort, naked mole rats have unnaturally long lifespans. While most rodents live hard and die young after a couple of years, NMR’s can live in upwards of 30 years. On top of this, their longevity is further boosted by a natural resistance to cancer, which we have been researching for at least 10 years to try and figure out how we can do that.

What a weird and ugly horcrux that would be.

Speaking of He-Who-Must-Not-Be-Named, look at the face on these things! Their lips actually seal behind their teeth to prevent dirt from falling into their mouths while they burrow. As well, their muscles are rigged to move their teeth independently for grabbing or shoveling things. Some would compare this function to how we use chopsticks, which is freaky in and of itself. This utility is valuable for them, as their food sources are fairly limited in the eastern horn of Africa. They need to eat enough of a plant’s roots or tubers to let the plant recover and regrow. If they kill it, they need to spend more effort to find a new plant than they gained from eating the first one. Talk about a weight watchers diet.

Because they live vicariously through their face, NMR’s also carry a quarter of their total muscle mass in their jaws. Could you imagine if humans were like that? Those giant jawbreakers from my youth would have been a joke!

Their intestines are also specially adapted to host bacteria that can break down the flesh of tubers other animals (like humans) could never digest, and convert it into fat. They’re also capable of and often do eat their own feces. Gross as that may be, it’s important for naked mole rats as it provides them with nutrients they need. Rodents are gross.

These weirdos are surprisingly intelligent as well as industrious. They build elaborate tunnel systems that can reach lengths in excess of three miles long, with rooms dedicated for certain functions like hiding from predators, huddling for warmth, and even restrooms, which I guess can be considered a dining room when we look at that last paragraph. Ew.

Now that I’ve completely disarmed the horror of the villains from our favorite books, I think it’s time to go check out a copy and enjoy it in the sun, before winter makes another vicious comeback.