Venues like the Panida Theater received a gift from Boise last week when Gov. Brad Little signed into law a bill permitting the sale of beer and wine at historic theaters. 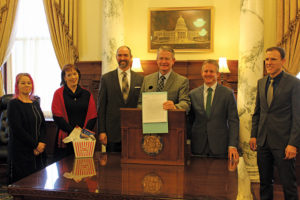 The new law is a boon for the Panida Theater, which can now sell beer and wine at all of its events without undergoing the tedious and expensive process of securing catering permits. That means fewer expenses and more money in the theaters’ coffers, which Panida Theater Executive Director Patricia Walker said is very much needed.

“This bill makes a monumental difference to the work historic theaters do to preserve the past and continue to contribute to their communities and local economies,” said Walker. “We are so grateful for this bipartisan effort many years in the making.”

The new law allows theaters constructed before 1950 and listed on the Historic Registry of Theaters to sell beer and wine, provided they apply for a beer and wine license. According to Rep. Mat Erpelding, D-Boise, who sponsored the bill, about 13 theaters in Idaho were built prior to 1950 and will potentially benefit from the bill.

“After traveling the state, I came to understand the importance of these historic theaters,” he said in a press release. “In many towns, the theater in the center of the action. The theater holds plays, movies, special events and all sorts of other events. It’s a place where people can come together as a community to be entertained, informed or just to celebrate.”

Rep. Sage Dixon, R-Ponderay, was also instrumental in moving the bill forward. He worked with Walker to understand the challenges the theater is facing and bring them into the bill’s development.

“Sage Dixon knew this was a challenge for the Panida, because in order for us to do it, we had to get catering permits,” said Walker. “It’s been a huge financial burden for us.”

According to Erpelding, historic theaters are ingrained into the cultural heritage of their communities and are a treasure worth preserving. That’s doubly true when theaters face more challenges than ever in the age of video streaming and instant gratification.

“The reality for historic theaters today is that it’s a tough world to be successful in. It seems that all of the costs have gone up: insurance, building repairs (and old theaters have plenty of those), movie rentals, advertising,” said Panida board member Susan Bates-Harbuck in a press release. “With Netflix, Hulu and Amazon, not as many people are realizing the enjoyment to be gotten from watching a movie with others. There you are in a beautiful setting, laughing with others, sharing the feelings that movies bring to us, and then talking about it on the way out into the lobby, maybe even to the coffee shop afterwards. The theaters need all the possible sources of income they can find.”