The legislature adjourned for the first time without approving administrative rules, leaving them in the hands of Gov. Little

At the end of each legislative session, Idaho lawmakers sign what’s commonly referred to as the “going home” bill. 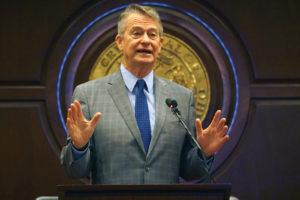 The bill approves existing administrative rules and puts them into effect from the upcoming July to the next July. Currently, only one of the bodies in the statehouse has to give the OK and the rules are passed — something the House took issue with this year. After sending an amended bill to the Senate — requiring both bodies approve the rules — and receiving a clean bill back, the going home bill went unsigned.

It’s something Rep. Heather Scott, R-Blanchard, pointed to as a notable moment from the session while speaking at a Bonner County Republican Women, Inc. meeting April 16.

“(The Senate) sent back a clean bill … and we basically adjourned without passing the going home bill, which is huge,” Scott said. “It’s unprecedented.”

The legislature’s inaction leaves administrative rules in the hands of Idaho’s executive branch, and places a cherry on top of what lawmakers and political analysts across the state are calling a bizarre session. Now, it’s up to Gov. Brad Little and his staff to sort through the more than 8,000 pages of administrative rules and maybe make some calls on which should remain active and which the state can go without. Boise State Public Radio defined rules as “everything from what curriculum is taught in public schools to the fees you’re charged when you enter a state park.”

“I did not ask for this and did not want this,” Little said. “However, I will use all authority I have to ensure our state government continues to operate smoothly and the administrative rules remain in effect without interruption.”

Little has already made a move to cut down on the cumbersome amount of administrative rules across all state agencies, passing an executive order in January called the “Red Tape Reduction Act.” The act requires that for every new rule an agency proposes, they cut or drastically simplify two more.

According to the governor’s office, the three most regulated areas in Idaho are economic development with 3,018 pages of rules, natural resources with 1,815 pages and health and human services with 1,666 pages.

Now, with the entirety of the rules at the executive branch’s disposal, more changes are sure to come.

“The efficient operation of state government is a priority of mine, and the people of Idaho expect it,” Little said regarding the current rules situation. “I have directed my administration to exercise necessary executive authority to minimize the impact on state agencies — and the public most importantly — as we work to address this unique circumstance.”

The statement goes on to explain the process for letting rules expire, noting Little’s office “will use the unique opportunity to allow some chapters of Idaho Administrative Code that are clearly outdated and irrelevant to expire on July 1, 2019. An agency must notify the Division of Financial Management (DFM) if it identifies a rule that could be eliminated. DFM will solicit public comment on any proposed rule elimination. Governor Little ultimately will make the decision before July 1 whether to let a rule expire.”

Alex Adams — DFM administrator, Little’s budget chief and the man responsible for the fine-toothed combing of the rules — told the Idaho Statesman that once he’s done, “no Idahoan should notice a difference. It will be business as usual with some minor cleanup of things.”

Once amended, the rules will be posted online. Moving forward, it’s unclear whether the House and Senate will review all of the rules. If one thing is certain, it’s that nothing like this has happened in Idaho before.

“I just hope Idaho citizens understand that this is a reset on rules,” Rep. Judy Boyle, R-Midvale, told the Statesman. “Idaho citizens have a great opportunity if they just take it.”