The Bonner County Republican Central Committee hosted a forum Wednesday night for the candidates running for the Lake Pend Oreille School District school board trustee election. The event took place at the Ponderay Event Center and drew around 100 people. 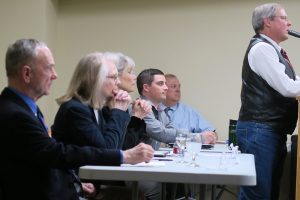 The candidates for the LPOSD school board trustee election answered questions from the audience Wednesday night. Photo by Ben Olson.

All candidates from Zones 2, 3 and 5 were in attendance and began the evening with five-minute introductory statements.

From Zone 2, Gary Suppiger stated he was a 25-year resident of Bonner County and has three children who graduated from LPOSD. Suppiger said he was running to give back to the community and said our school district was doing well, citing many awards that Sandpoint High School has achieved in recent years.

Suppiger’s opponent from Zone 2 was Richard Miller, who has lived for 20 years in Sandpoint and has a daughter who went to public school. Miller’s focus was on improving the vocational, P-Tech and life skills offerings from the district.

Zone 3 candidate Victoria Zeischegg, herself a public school graduate, cited her activities in local organizations such as parent teacher boards and principle advisory boards as evidence that she is invested in the public school system. She advocated taking a “fine-toothed comb to the budget to ask, ‘How can we do more for less?’”

Zeischegg’s opponent in Zone 3 is Lonnie Williams, who has lived in Bonner County since he was three years old, was a graduate from Sandpoint High School and claimed to be highly active in extracurricular activities.

“I feel our extracurricular activities are in jeopardy right now, which is why I’m running,” said Williams.

Williams, who works for a title company in Sandpoint, also stated that the health of our public school system has a direct relationship to the economic stability of our region: “When people are moving here, one of their first questions is, ‘What are the schools like?’ If the schools are rubbish, chances are, they won’t move here, and our growth goes stagnant.”

For Zone 5, which includes greater Sandpoint, candidate Cary Kelly said he has been a Bonner County resident for 24 years after retiring from a career in the military. Kelly also received a master’s degree in education and worked briefly as a high school teacher before becoming involved in Bonner County government. He recently finished a four-year term as Bonner County commissioner.

Kelly recognized that he, as well as the greater Sandpoint area, overwhelmingly supported both the supplemental and plant levies last year: “A better option to generating a plant levy all at once would be to gradually take care of infrastructure problems,” he said.

Kelly’s opponent in Zone 5 is Anita Perry, who moved to Bonner County from southern California when she and her husband retired. Perry holds a degree in social sciences and history and spent most of her career working in business management for California State San Bernardino, as well as managing records for two large police departments in California.

“Since I’ve retired, I’ve become very interested in public administration,” said Perry. “In a year and a half, I’ve attended almost every school board meeting, and I recognize that there is a divide in this community. … The school board needs to be the front lines of healing that divide. We need to be a watchdog for the community.”

After introductory remarks, the forum was open to questions from the audience. One in attendance asked Zone 5 candidate Perry why she didn’t support the supplemental school levy.

“I supported the $15 million figure, but not the $17 million,” said Perry. “The school district is in desperate need of repairing, but at some point, voters will say, ‘Enough’. … These people are in financial straits. This is putting this town in a downward spiral.”

Other questions dealt with the proposed vocational upgrades, asking candidates why and how it was to be done to increase these programs without adding to the budget.

“The info is out there, all we have to do is put in the effort and get it done,” said Miller. “Businesses need to get involved and donate, because this is their workforce. The school district can’t do everything.”

Throughout the evening, the dividing line between candidates was clearly drawn by the audience as those who supported the recent school levies and those who didn’t.

Williams called out candidates who voted against the levies as voting contradictorily to their words: “You can’t stand up here and say you support your schools and vote against the money that funds them,” he said to applause from the audience. “Either you support the schools or you don’t.”

Zone 5 candidate Perry, who said she did not support the supplemental levy last fall, claimed it was important that the school district “do more for less.”

“How exactly do you propose to do more for less?” one audience member asked Perry. “Is that really possible?”

“We are above our state staffing formula,” said Perry. “I think it’s necessary to go through the model and see if there is a more efficient way. If we are overstaffed, what are we doing wrong and how do we fix it? More for less is possible. Our budget is very large. We need to go over every detail and see where we can save money. Do we really need to look at academics before we look at salaries?”

“You can’t do more for less, obviously,” Suppiger said. “We have five schools in our district that are under 200 enrollment. I would never support consolidation and closing of these rural schools.”

Another audience member asked candidate Miller, who lauded the benefits of increasing vocational education, how he would save money on these programs when they cost anywhere from 30 to 50 percent more per pupil.

“It is expensive,” said Miller. “But guess what? They deserve it. Those students will be left behind. You either have to open your wallets now or support them for the rest of their lives.”

Zeischegg compared the “more for less” question with learning how to cut out a pattern for sewing: “You can cut out patterns as they say how to, or you can find out how to lay the patterns down in a different way so you might save more fabric.”

Kelly emphasized the importance of not leaving our students behind: “Student achievement is number one. Every student should have the opportunity to develop their full potential.”

With the Bonner County Republican Central Committee forum concluded, there are still a few more chances to learn about school board candidates.

The 88.5 KRFY Morning Show has one more interview scheduled with Zone 2 candidates Richard Miller and Gary Suppiger for 8 a.m. Wednesday, May 10. You can also listen to past interviews with Zone 3 candidates Lonnie Williams and Victoria Zeischegg and Zone 5 candidates Cary Kelly and Anita Perry at www.krfy.org/podcast.

KRFY, Sandpoint Online and the Sandpoint Reader will also host a candidate forum set for 5:30-7:30 p.m. on Wednesday, May 10, at the Columbia Bank community room. The forum will also air live on 88.5 KRFY.

As always, you can find candidate info, links to maps of each zone’s boundaries and more election information at the Sandpoint Online Election Central: www.sandpointelections.com.