When it comes to finding a monumental way to help your neighbors, all it takes is a spark. In the case of Firewood Rescue, that spark was Paul Krames. 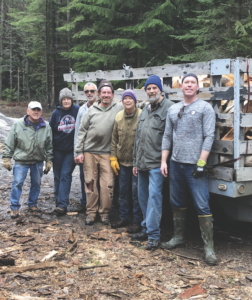 When he became aware of a program through the VFW that delivered wood at no cost to local veterans, Krames got to thinking: What about seniors, people with disabilities, people who are seriously ill or in dire circumstances due to factors beyond their control?

With the help of local nonprofit Planted Roots Foundation, Krames began Firewood Rescue in 2018. Firewood Rescue, which is now an officially registered nonprofit, is “dedicated to providing a one-time delivery of firewood to individuals and families who are in need, on an emergency basis,” according to the group’s mission statement.

Thanks to generous donations of wood from the community, Firewood Rescue has provided a heat source for a wheelchair-bound amputee, the family of an individual who suffered severe injuries in a car crash, an elderly woman with holes in her roof and a wood stove as her only heat source, a man with a broken hip whose wife is on dialysis and many others. Krames said that when he started Firewood Rescue, those were the types of situations in which he envisioned assisting.

Firewood Rescue board member Eileen Esplin is one of about 43 volunteers who stepped up this year to support the program.

“For me, it was great that I could participate in something so simple,” Esplin said, referring to the straightforwardness of stacking wood.

But no matter how simple the task, Esplin said being a part of Firewood Rescue brings with it a plethora of major benefits.

“For some of us it’s physical exercise, but you’re also getting to help somebody else out,” she said.

Firewood Rescue sees thankful participants on both the giving and receiving ends of the organization’s work: people who need the wood and those who help to cut, stack and deliver it. It’s something Krames loves about the group’s dynamic.

“Imagine that,” Krames said. “Many volunteers [have] thanked me for allowing them to be part of this effort. They’re the ones running chainsaws, hauling wood, loading and unloading trucks, and making deliveries — often in the cold and rain — and they’re thanking me. It’s humbling and a little unbelievable.”

To volunteer, donate firewood or reach out for assistance, email Eileen Esplin at [email protected] Firewood Rescue can also be reached through the Sandpoint Community Resource Center, Community Action Partnership or Facebook.