From writing No. 1 radio hits to earning recognition as performers in their own right, Thom Shepherd and Coley McCabe have seen every side of the country music scene. 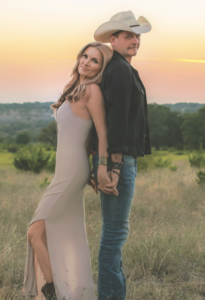 The Reader caught up with Shepherd ahead of the duo’s show at Di Luna’s Friday, Jan. 24.

Reader:You and Coley started your careers in songwriting for other artists, correct? How did you make the transition to performing your own music together?

Thom: Coley started her career as an artist on RCA Records, she had a hit single with Andy Griggs called “Grow Young With You” that was in the Natalie Portman film Where the Heart Is, and she wrote the top five platinum selling SheDaisy hit “Lucky 4 You.” I wrote the No. 1 hits “Riding with Private Malone” and “Redneck Yacht Club.” Coley and I had offices in the same building on Music Row [in Nashville]. We started dating in 2011, [and] got married in 2015.

I have always been a performer, that’s what I moved to Nashville to do and ended up being more known as a writer. I moved to Texas to be a full-time touring artist, and that’s what we’ve been doing ever since.

SPR: For people who haven’t heard your music, how would you describe your sound?

TS: We are both country singers. We do mostly songs we’ve written, a mix of fun songs and serious songs. As Coley likes to say at shows, “We’re gonna have you laughing and crying, laughing and crying.” We hope after you see our show, you’ll feel like you know us and you’ve made a couple new friends.

After being in Texas I guess you could call us Red Dirt artists, too. And over the years we’ve built a huge Parrot Head following in the Trop Rock world — my song “Always Saturday Night” gets a ton of airplay on Radio Margaritaville — and at the big Meeting of the Minds Festival in November in Key West we just won Duo of the Year, Female Vocalist of the Year, Singer-Songwriter of the Year and Event of the Year for our Lone Star Luau music festival.

SPR: Any recent or upcoming projects you want to highlight?

TS: The Lone Star Luau that we put on happens very soon and is almost sold out — Feb. 6-9 in Marble Falls, Texas [lonestarluau.com]. It’s a trop-rock/singer-songwriter/Texas music kind of festival. And we just released our album Shotgun last year [find it on Spotify]. I really think it’s our best project to date. It’s a mix of beachy songs, cowboys songs, story songs and drinking songs. One of the songs, “New York to Montana,” has been turned into a novel and is coming out soon on audible.com. We recently wrote a song about Idaho that we cannot wait to record! We would really like to do some kind of songwriter festival in Sandpoint in the near future, and of course perform at The Festival at Sandpoint at some point.

SPR: You guys are known to travel quite a bit to play shows, but always make it back to Sandpoint a couple times a year to perform. What about this area is special to you?

TS: My son is 15 and lives in Sandpoint. My first wife is from the area, so I’ve been coming up to Sandpoint to visit since the early ’90s … We decided this year to move to the area so we can see my son all the time and it has been so great. He and I have been skiing a lot. We live in Ponderay now and are really loving the area’s small-town feel, so I guess you could call us locals now. We really love how much music there is going on in Sandpoint on any given night, and we were very excited to line up the date at Di Luna’s. After all these years of coming to town I finally went to see [Reader Publisher] Ben Olson play a show there, and just loved the singer-songwriter vibe of the place. Coley and I have played at the legendary Bluebird Cafe in Nashville and it kind of has that feel. We love doing “listening room” type shows, and telling the stories behind our songs. Connecting with our audience is the most important thing to us.