If one were to imagine the armor of the medieval ages, images of gallant knights in full—body platemail astride awe—inspiring steeds in full barding would likely pop into your head — in actuality, if we had lived and fought during that time, very few of us would be wearing that. Regardless, if any of us aspired to survive the battle of Agincourt, we would require some kind of protection.

The gambeson was the most widely—equipped piece of armor in the medieval period, and for good reason. It was a quilted coat stuffed with dense fibers such as horse hair or straw that was designed to disperse the amount of force delivered by a slashing or bludgeoning attack — this was done by adding dimensional surface area for the attack’s force to spread, lessening the chance that you may endure the biting edge of your enemy’s blade. Unfortunately, due to the insulatory nature of the gambeson, it was extremely uncomfortable to wear into battle for hours at a time during the summer. Imagine going eight rounds with a professional boxer in an outdoor arena in the middle of August. Additionally, due to the nature of the fabric, it was virtually useless for protecting its wearer from projectile or lance attacks, as the sharpened point of either would simply slip between the fibers that had just saved you from a sword slash. 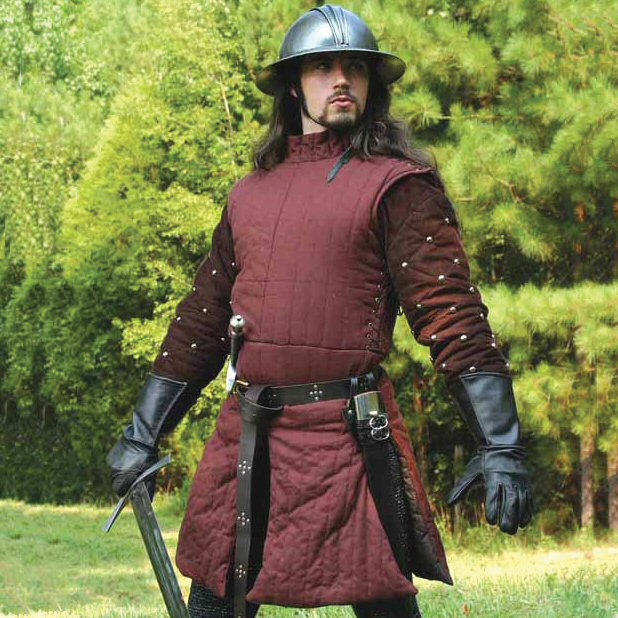 “Does this gambeson make my butt look big?” Courtesy photo.

If the gambeson was so ineffective against two of the most utilized weapons during the medieval ages, why was it so popular? It was inexpensive to produce and more importantly, it could be worn beneath other types of armor. The lack of metallurgical prowess involved with producing a gambeson also meant that it was easy for the rank-and-file soldiers of medieval armies to repair their armor on the go. Many of these soldiers were peasants or lower-class citizens seeking to make a quick silver before winter, and were already experienced at mending clothing, as it was a fairly common skill required for survival at the time.

On top of all of that, the gambeson is pretty stylish, even by today’s standards — especially once you make one sporting your favorite colors. Forget the football jersey, I want some quilted linen protection!

An upgrade from the classic gambeson is the brigandine, which was constructed of a heavier, layered cloth or leather and riveted with large iron studs. Brigandines were drastically more expensive to produce because of the metal components, but they were well worth the money. A well-fitted brigandine was especially useful for nullifying sword strikes, as the long blades would collide with the iron studs, sapping the force of the impact before the cutting edge would even strike the cloth beneath. Additionally, these iron studs increased your chance of survival from projectile fire and lance strikes. When paired with a gambeson, you were considerably more likely to survive an engagement on the battlefield.

The drawbacks to the brigandine was that it came in pieces — most often a vest, but sometimes also shoulderpads and cuffs. This type of armor wasn’t designed to articulate, which left your joints and legs exposed.

Though not employed as frequently as other forms of medieval armor, lamellar armor did appear as one of the oldest forms of armor ever used in combat — first seen sometime around 800 BCE in Assyria, it persisted into the medieval ages as a reliable form of armor. Lamellar armor was characterized by its layers of iron scales protecting the torso and thighs. These scales virtually nullified sword and hammer strikes and were quite capable at deflecting projectiles as well.

Unfortunately for most combatants in the medieval ages, the better your armor was at keeping you alive, the more difficult and expensive it was to produce and maintain. Flat iron scales damaged by projectile strikes were more likely to buckle should they be struck again, which opened the avenue for one of the most prolific forms of armor to ever grace the battlefield: mail armor.

Composed of hundreds, sometimes thousands, of tiny iron rings linked together, mail was a game-changer for the European crusaders between 1095-1492 CE. The network of metal rings allowed for the force of an impact to be dispersed across not only the area a blow was struck, but rippled across the entirety of the armor’s structure — this created an effect similar to a rock splashing into a pond and creating ripples. Mail armor was such a tremendous military achievement that blacksmiths of the age made everything into mail armor. Helmets, gloves, trousers, boots and even some cloaks were lined with mail.

It wasn’t until the 14th century CE that the gallant, knightly plate armor we all know today would come into existence. The most ornate forms of this armor were crafted in Milan, and had come to be known as Milanese armor. Deemed the crowning jewel of militaristic technology at the time, only the richest aristocrats of the various kingdoms could actually afford to have this type of armor crafted for them — and it was often just for show. Plate armor was deemed obsolete by the time gunpowder made its way to Europe in the 15th century, and pike-and-shot warfare became the norm.

Imagine refinancing your house to buy your dream car: a brand new Tesla roadster, just to find out that someone just released a flying car that costs half as much and uses solar power to run. Talk about buyer’s remorse.