Since the Nixon administration, Idaho has offered some of the nation’s most sweeping protections for parents who turn to prayer and hoped-for divine intercession — not doctors — when their children are sick. Proponents pitch the laws as a protection of religious rights. But for the better part of a decade, a vocal opposition has grown in numbers and vigor on the argument that the legal shield is tantamount to child abuse. Over the past several weeks, they’ve mobilized in the hopes of finally getting the issue in front of the Idaho Legislature. 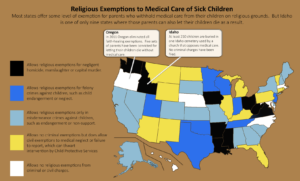 “From our standpoint, we agree that everyone should be able to believe whatever they want,” Wingate said. “The difference is [that] the actions you take because of those beliefs should not be used to harm others.”

The verbiage stated: “A parent or guardian legitimately practicing his religious beliefs who thereby does not provide specified medical treatment for a child, for that reason alone shall not be considered a negligent parent or guardian.”

Despite being removed in 1983, many states retained the faith healing provisions in their own laws for decades to come. It’s an example of federal interference that would typically run contrary to Idaho’s libertarian spirit, according to Sherman.

“We usually don’t like that kind of thing around here,” he said.

What’s far worse, opponents argue, is that the laws have a direct impact on Idaho kids — especially those growing up within the Followers of Christ religious sect. Prominent in Canyon County, the Followers of Christ have strict beliefs restricting the use of modern medical care. Former member Linda Martin, for instance, witnessed the death of her newborn cousin from pneumonia.

“They believe that medicine is a temptation from Satan, and to give in is to give in to that temptation,” she told the Reader in 2016, when the issue was proposed for discussion in the Senate Health and Welfare Committee. “They also believe to give in is for people of weak faith or no faith. People of the world are seen as tempted.”

While a full tally of deaths due to faith healing practices is under-reported and therefore hard to calculate, a survey of Followers of Christ graves reveals a disproportionate number of child interments. According to advocacy organization Children’s Healthcare Is A Legal Duty, 204 of the 592 graves in the largest cemetery, Peaceful Valley, belong to minor children — a figure 10 times the state average for minor child death and stillbirth. Likewise, a 2015 report from the Governor’s Task Force on Children at Risk identified two specific cases of children who died in 2012 from religiously motivated medical neglect.

Despite this, faith healing opponents’ efforts to secure a legislative committee hearing have so far been fruitless. In 2016, it appeared that a bill sponsored by Gannon would receive a hearing in the Idaho Senate Health and Welfare Committee headed by Lee Heider, R-Twin Falls, but the hearing never materialized.

“[Heider] was not a champion of this, and his constituencies are part of the faith groups that practice faith healing,” said Wingate.

At the recent Statehouse panel, Boise Police Chief Mike Masterson and Canyon County Sheriff Kieran Donahue argued that the laws effectively set up a double standard — protecting one class of people in situations that would land anyone else in jail.

“The fact that we have [Masterson and Donahue] in this discussion this year, I think that says volumes,” Wingate said. “Their attitude is we should have equal laws for everyone.”

“We don’t have standing so we can’t take this to court, but if we did, we could get this thrown out for constitutional reasons,” said Wingate.

While it’s impossible to set odds on whether the Idaho Legislature will take action on faith healing laws this year, Wingate and Sherman are encouraged by the momentum behind the movement. They said there’s more energy than ever behind the issue. What’s more, they have a new strategy for maximizing their chances of success.

First, they intend to temper their request. Rather than repealing the faith healing protections outright, the new proposal is to set up sideboards that can evaluate whether a child’s rights have been violated through the withholding of medical care. That alone would give law enforcement and prosecutors a legal angle in situations that otherwise tie their hands.

“By asking that some sideboards be placed on the exemption, there’s at least some way for law enforcement to protect the life of that child,” Sherman said.

A secondary strategy this year is submitting a bill to the Idaho Senate Judiciary Committee — not the Health and Welfare Committee. By approaching the issue from a legal standpoint, Wingate and Sherman believe they improve their odds of securing a hearing.

This week could prove vital for the entire endeavor. According to Sherman, the aim is to submit a bill to the Senate Judiciary Committee by Friday, Jan. 24. From there, the legislative wheels will begin turning to set a hearing date — or at least, that’s what advocates hope. The other essential step is persuading Republican lawmakers to champion the cause.

“With only seven senators in the Legislature who are Democrats, that’s not going to go very far without Republican sponsorship,” said Wingate.

Wingate and Sherman believe there’s no time to lose in taking action on faith healing protections. With neighboring Oregon among the latest states to take action to restrict legal protections for faith healing in its own religious exemptions, they worry that Followers of Christ members and other religious sects will see Idaho as an increasingly attractive place to live. That, according to faith healing opponents, has the potential to make an already bad situation worse.

“We don’t want Idaho to become a haven for that,” said Sherman.