Summer might be drawing to a close, but there are still a few months left in the construction season before the snow flies.

Perhaps the most conspicuous new project is the sewer main replacement on First Avenue. Work on the project began promptly after Labor Day, with the first leg of work centering on the intersection of First and Main. Once work is completed at the intersection around mid-September, it will advance northward, ultimate encompassing the stretch of First Avenue spanning from Cedar Street and Second Avenue to Church Street.

Drivers should expect limited mobility as work unfolds from block to block, although the project is structured to limit affected stretches of street. Individuals trying to access businesses in the area can make use of the Farmin’s Landing parking lot, which provides two-way access. 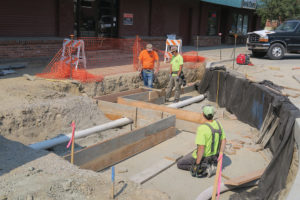 Construction crewmembers get down and dirty as they work on a bulb out at the corner of Fourth Ave. and Cedar St. on Tuesday. Photo by Ben Olson.

On Sept. 15, the city will take advantage of the street closure to make room for a cornhole tournament approved by the American Cornhole League. Sandpoint City Administrator Jennifer Stapleton said the idea is to encourage foot traffic to businesses in the downtown core that suffer during the construction season. The event will feature $1,000 in prizes and is a satellite event to the Inland Northwest Cornhole Championship, which takes place this Saturday afternoon at Mickduff’s Beer Hall.

Meanwhile, work progresses on schedule on Cedar Street. According to the most recent city construction update, work following the Labor Day weekend will include “intermittent lane closures and flagging between Second and Fifth Avenues while crews continue placing sidewalk and pavers, backfilling and installing street furniture.”

Finally, work is progressing along Ella Avenue. The project is primarily focused on paving replacement along with limited work on curbs, gutters and storm drains. Since funds remain in the project, planners are looking to enhance the safety of the street, which is a popular bike route but includes only two stop signs.

In a presentation to Sandpoint City Council members Wednesday, city engineer Dan Tadic said residents along the street have reported speeding drivers, and the combination of Litehouse shift changes and school pickups can lead to congestion problems.

To improve the safety of the street, planners are considering a variety of speed-control approaches. One particularly attractive option is a speed table — a device that provides a three-inch rise over several feet. In contrast to speed bumps, speed tables provide a gentler, shorter ascent over a longer stretch of road. Tadic said they are recommended for speed control in the most definitive street design guides relied upon by professionals nationwide. What’s more, they shouldn’t impact snow removal service during the winter or drainage during rainy seasons.

“(Our street superintendent) doesn’t feel these will impede snow removal, particularly because this route will be cleared with a new loader as opposed to the grader,” Tadic said.

“We’re looking to put these mid-block to avoid intersections and driveways,” said Tadic. “There’s not a ton of areas you can necessarily put these.”

The safety improvement additions to the Ella project have received preliminary approval from granting agency Local Strategic Initiatives, which funded the project at $546,732 The next step is to contact adjacent property owners to inform them of the work