A series of racist robocalls made national news last week, each claiming to have been paid for by a video blog called The Road to Power, a video blog site that has a connection to Sandpoint resident Scott Rhodes.

According to the Washington Post, the Florida robocall began with sounds of drums and monkeys in the background as an affected voice said, “Well, hello there. I is Andrew Gillum. We Negroes … done made mud huts while white folk waste a bunch of time making their home out of wood an’ stone.”

The call was listed as paid for by “TheRoadToPower.com,” which contains racist videos featuring Scott Rhodes, whose identity was confirmed by Sandpoint Reader reporters as the same man investigated for the distribution of racist CDs onto students’ vehicles parked in the Sandpoint High School parking lot late last year. 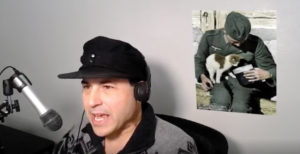 The story led to national news last week, with most major news networks reporting on the call.

“This is reprehensible – and could only have come from someone with intentions to fuel hatred and seek publicity. Please don’t give it undeserved attention,” Gillum’s spokesman, Geoff Burgan, said in a statement to the media.

A similar robocall was reported in Iowa last week which attempted to politicize the death of Iowa university student Mollie Tibbetts after she was allegedly killed by undocumented immigrant Cristhian Bahena Rivera earlier this month.

The call, also listed as paid for by Rhodes’ website, used a voice attempting to impersonate Tibbetts: “If after her life has now been brutally stolen from her, she could be brought back to life for just one moment and asked, ‘What do you think now?’ Mollie Tibbetts would say, ‘Kill them all.’”

The Des Moines Register reported that Tibbetts’ father Rob, among others in Iowa, received the automated call just one week after his daughter was found dead.

“It was unbelievably painful,” Tibbetts told the Register. “It was everything that’s dark and wrong in America right now.”

He also said the call contained views that Mollie would have considered “profoundly racist.”

The Florida and Iowa robocalls continue a pattern of racist automated calls which claim to be paid for by Rhodes’ website, with other racist calls received in Oregon, California, and Charlottesville and Alexandria, Va. It is unclear how many have received calls in each location. 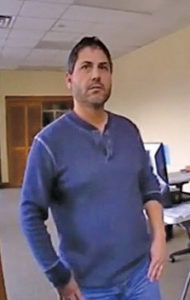 Scott Rhodes, as seen in a Sandpoint PD body cam still after he was trespassed from school district property in Dec. 2017. Courtesy SPD via public records request.

A call last month in California supported neo-Nazi candidate Patrick Little for Senate, and another urged Californians to move to North Idaho because it’s “one of the whitest places left.”

Residents of Sandpoint reported they had received robocalls from Little — which were not listed as paid for by Rhodes’ website — claiming he was going to arrive in Sandpoint in “mid-August” to drum up support for a presidential run in 2020.

When reached by a Reader reporter, Little was unable to provide any specifics on a meeting time or place in Sandpoint, but said he was “Running on an ‘expel the Jew platform’ in 2020.”

Asked if he knew Rhodes, Little demurred: “He seems like a great guy. I look forward to meeting him. I know he’s an honest man.”

Little also labeled his plan calling for the expulsion of all Jews from the United States “moderate.”

When asked if he also intended to deport American citizens who are Jewish, Little said, “I gave birth to a shit yesterday, that doesn’t make it American.”

An attempt at follow up was declined by Little, who demanded $500 per hour to speak to a reporter.

Despite his website being listed as the sponsor of the calls, Rhodes has repeatedly denied involvement with the calls on social media.

Rhodes’ identity — first reported by the Sandpoint Reader in December 2017 — was learned after Sandpoint police investigated the distribution of racist CDs in the Sandpoint High School parking lot. Sandpoint PD observed a red Jeep in surveillance video which was linked to Rhodes. Officers received a tip from the Alexandria police in Virginia linking Rhodes’ Sandpoint office to harassing phone calls targeting that city’s mayor, Allison Silberberg. Local officers visited his office and trespassed Rhodes from school district property for one year. That trespass order will expire in December 2018. Rhodes has not been charged with any crimes.

Rhodes, who may also use the name Scott Platek, has not responded to multiple attempts for comment but did email a Spokesman-Review reporter after the Reader publicized his identity.

“There has been an outrageous attempt by two small town papers to mislead readers to infer that I have something to do with actual crimes,” Rhodes wrote. “Further, a single phone call to a public office holder, if truly made from my shared offices as alleged, is not a crime if the content was as they describe.”

A Sandpoint attorney contacted the Reader in Jan. 2017, claiming that he had been retained by Rhodes, but subsequent inquiries to the law office revealed that Rhodes was no longer a client.

Rhodes moved out of his offices on Division Avenue after stories published his identity, but he is currently still renting a home just west of Sandpoint.

A Reader reporter reached out to the property owner who rents to Rhodes, but the landlord declined to comment on the record.

Rhodes’ website contains over a dozen video podcasts featuring racist language and ideas, all spoken by him. Rhodes regularly targets Jewish and African-American individuals with racial slurs in his videos and outlines ideas for starting national movements to place white nationalists in power. He regularly advocates the mass expulsion of Jewish and African-American individuals from the U.S.

Rhodes also encourages viewers to spread hate flyers in one video, suggesting viewers buy clear plastic bags that “also allows you to put something inside to give it weight so you can easily toss it, that also prevents it from blowing away.”

Sandpoint residents reported on several occasions that racist flyers were found on their lawns in clear plastic bags, some with weights added to them to make them easier to throw.

While most of Rhodes’ videos have between 100-200 views each, the latest media attention he has received kicked the latest video’s view count over 2,000 views.