By Drake the Dog
Reader Staff

Where am I taking my humans on this first Saturday of 2016?  My Black lab mix, rescue pup friend Pepper has been barkin’ up a storm about La Petite Maison.

“Pepper,” I said, “you’re not French, and this sounds so pretentious. What’s the real name of this place?”  Pepper replied, “Well, ok, your rustic experience today will be Small House Winery.” What a great day for wine tasting. The holiday company is gone and the Missus and Mr. need to replenish the wine cellar in preparation for the upcoming birthday celebrations. We deployed Google maps to find 1636 Baldy Park Drive.  I was so excited to see Pepper and catch up on all of the pawliday happenings. 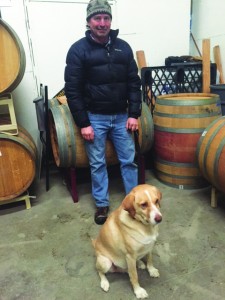 Patrick Werry, winemaker, welcomed us to his “House”. When the winery is open to the public on Saturdays from 11-6, Pepper is safely tucked away; not at the winery. While your humans enjoy wine tasting, you can snuggle down in her bed and slurp from her water bowl. She doesn’t mind.  I had to explain to the Mr. and Missus that Pepper is suspicious of strangers, which stems from her wanderings on Schweitzer Road seven years ago.  Lisa and Patrick found her between switchbacks two and three.  She told them that she had been wandering in the woods for about a week, and was looking for a home and a real job.  Hence, she works in the winery daily alongside Patrick and Lisa Gerber when strangers aren’t present. This makes her happy.

For the aforementioned reasons, Pepper’s forte is in the field of supervision, not customer service. She supervises the entire winemaking process, which starts late in the summer.  She goes along for the ride when Patrick travels to Walla Walla or Prosser to get grapes.  She loves walking off leash in the vineyard while the team drops off the bins. There are so many great vineyard sniffs!

Making wine is a long, slow, patient process; hence this is not a job for a cat.  Pepper supervises the process from her bed in the winery.  Crushing, de-stemming, fermenting, adding yeast, measuring the brix level, and waiting for it to hit 0, pressing off the grapes putting the young wine in barrels, and waiting six months, up to two years…bottling, corking, and labeling.  The bottles need to sit, so they do not endure bottle shock.

Patrick touches every bit of fruit, sorts and presses and ferments it by hand. Then the fun begins.  Pepper’s parents taste test the wine, while Pepper gets to sniff the cork!  The parents constantly taste during the process and decide when the wine is ready to sell. (Tough job!)

Talk about a string of dog day afternoons…. it’s so hard for Pepper to get away.  She has her bed next to the fireplace at home on Schweitzer Mountain. When she is in town, we explore the Syringa Pend Oreille Bay and Sand Creek trails together.  We also like to run, snowshoe and chase our parents on cross-country skis! Pepper usually lets her Mom take the lead because it’s hard work blazing a trail through deep snow…but also because she doesn’t like guys with beards and hoods so she can hide behind.  I on the other paw, like running up ahead. We both love visiting the treat dispenser building (the bank).

Enough about us.  Pepper recalls that in 2009, his Dad, Patrick, was feeling like he needed a creative outlet to pursue his passion. After a few bottles of wine, (maybe too much), he decided he’d like to make wine himself. Over the years, he educated himself on making wine.  The business side was another challenge, as he learned how to work with growers and purchase grapes from one of the finest grape-growing regions—Washington State.  Relationships are everything because growers won’t sell their fruit to anyone.  Small House opened to the public in November of 2013.  That year, their Small House Red (a staple in our house) was honored with a  Silver medal at the San Francisco Chronicle Wine Competition.  Kudos! As the Mr. says, “Wine is like duct tape, it fixes everything!”

Rules of the Small House:

•Enjoy the simple quiet life at the winery.

•Relax in Pepper’s bed and drink from her water bowl.

•Sniff, sniff, sniff!  Learn the difference between the aroma of Chardonnay and Malbec.

•Put your paw print in the guest book so Pepper will know you were there.