An art project that could go as far as Jamaica and New York City is getting its start in Ponderay. 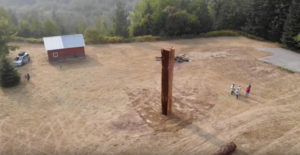 A still frame from a video on YouTube documenting the installation of the tree in Ponderay.

Local man Don Frost is carving a giant redwood into a statue of King Nebuchadnezzar, a Babylonian king from the Book of Daniel in the Bible. A religious project of ambitious scope, the statue is intended to further religious outreach and inspire a greater interest in the Bible and biblical prophecy. According to Frost, the project could potentially be one of the largest chainsaw carvings in the world.

The subject of the carving, King Nebuchadnezzar, is drawn from the second chapter of Daniel. In the chapter, Nebuchadnezzar dreams that a giant statue made in his image of multiple materials — gold, silver, iron, bronze and clay — is crushed by a stone that grows to fill the entire world. The prophet Daniel then interprets the dream, saying that Nebuchadnezzar’s kingdom would be overtaken by new worldly powers, which would ultimately be overturned by an everlasting kingdom of God.

The overall height of the statue will be 43 feet and feature a variety of colors, which correspond to the different materials used in Nebuchadnezzar’s dream statue. A massive undertaking, the statue would challenge any artist due to its height and weight. According to Frost, transporting the redwood alone has already posed some mechanical difficulties, albeit nothing they haven’t overcome.

The hope is to use the Jamaica project as the basis for a larger statue — up to 90 feet tall — that Frost intends to raise in midtown Manhattan. But even with a project half that size, Frost has his hands full.

“Even moving it with a piece of equipment … I mean, that was a 40,000-pound piece of equipment, and it exploded the hub on it like it wasn’t even there. So it’s a massive thing, and it’s very heavy,” said Frost.

Fortunately, they have a friend in local businessman Lew Patrick, who donated the property on which the statue is being carved. Frost and his collaborators have until Nov. 1 to complete the project.

“If we don’t get it done by then, we have to either plead for mercy from Lew, or we have to go a different direction,” said Frost.

For Patrick’s part, he’s happy to donate the property for such an ambitious undertaking.

“It’s big for us,” he said. “To have this happening in Ponderay, Idaho, is really huge.”