A hotly contested proposal among county landowners, the revised revisions will establish a minor land division as four or fewer lots, a minor subdivision as 10 or fewer lots and a subdivision as 11 or more lots. Commissioners saw the changes as another means of lessening expense and hassle for county landowners, an objective they’ve pursued through various measures for more than a year. The subdivision alterations were especially needed due to an epidemic of divisions created through recorded deed and out of compliance with county code, Commissioner Todd Sudick said. 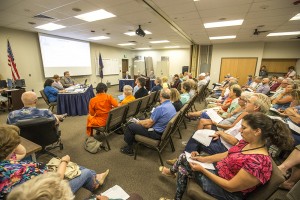 “The process we have now is not working,” he added. “If it were working, we wouldn’t have this problem.”

According to Bonner County Planning Director Milton Ollerton, the smaller divisions would be authorized by the Planning Department without a need for a public hearing, detailed plat map or a confirmation that the property had been inspected by Panhandle Health District.

Ollerton said the revisions would make the subdivision process easier and less expensive for county landowners. He cited a case where one landowner spent six months and $50,000 to divide his property.

At the packed Thursday meeting, commissioners pushed back against the notion that the new subdivision ordinance would increase density, which they said was controlled by zoning. They said the proposed ordinance merely changed the mechanism of subdividing. This claim was resisted by landowners Ken Haag and Jeremy Grimm, who said the new system allowed individuals to quickly divide into the smallest allowable parcels.

“What happens … is you get very fast development,” said Grimm, a former Sandpoint planning director.

“I would equate it to death by 1,000 cuts,” he later added. “Sure, none of them kill you, but if you go to the standards of fly-by-night approval, there’s no [comprehensive perspective].”

Some comments during public testimony were supportive or neutral of the changes. Raphael Barta, representing the Realtor community, was neutral but encouraged commissioners to make decisions based on proven planning policies.

“We want proposals based on science and best practices,” he said. “[We want] principles before politics and personalities.”

Sandpoint Planning Director Aaron Qualls, also neutral, reminded the county to be careful the potential increase in development didn’t cause the cost of county services to outweigh generated revenue.

Other comments were in favor of the changes.

“If it makes the process a little bit easier, I’m in favor of that,” landowner David Marshall said.

The majority of public testimony was opposed to the changes. A major concern centered on the instances where Panhandle Health District authorization was no longer required. The risk of a faulty and unauthorized septic systems contaminating the environment and waters was too great to ignore, many argued. Erin Mader, program coordinator for the Pend Oreille Lakes Commission, said that malfunctioning septic systems could have a devastating impact on lake health.

“We should be making progress to lessen, not set ourselves up for, more problems,” she said.

The most frequent request from those in opposition was that the process be slowed down. Commenters asked that informational meetings be organized so that residents knew exactly what changes were on the horizon.

County commissions ultimately sided with residents requesting a delay. They sent the matter back to the Bonner County Planning Department, which has organized a series of public meetings to discuss subdivision changes. They are scheduled for 6 p.m. at the following dates and locations: Aug. 16 at the Bonner County Administration Building, Aug. 22 at Sagle Community Hall, Aug. 23 at Blanchard Grange #440 and Aug. 31 at Memorial Community Center in Hope.