By the end of the night Tuesday, nearly 300 people had entered the doors of Hope Elementary School to attend the Scotchman’s Peaks open house event.

They browsed informational poster boards, asked questions of representatives from the office of Sen. Jim Risch, R-Idaho, as well as the U.S. Forest Service. They also had the opportunity to write down their questions, concerns or support for the proposed wilderness on sheets of paper that will go straight to the senator’s office in D.C. 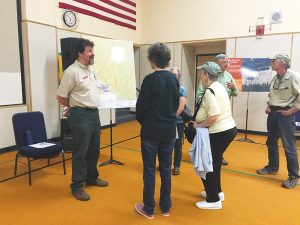 The informational posters, spread throughout the school gym so the public could freely browse during the three-hour event, addressed parts of the proposed bill pertaining to hunting, fishing, boundary lines, logging, recreation, fire management and more. A Risch representative or Forest Service official stood at each station and fielded questions.

Darren Parker, Risch’s legislative director, manned the hunting and fishing station. He said he answered questions from community members both opposed and in support of the proposed wilderness, and was impressed with the great turnout.

“After the Clark Fork meeting, we heard two things: people either felt like they weren’t part of the process, or they wanted more information about the proposal,” he said, noting that he encouraged everyone he spoke with to fill out a written comments sheet. “We really want to take those back to the senator so that we can make an informed decision about this.”

Friends of Scotchman’s Peaks Board Chair Doug Ferrell commended the format of the event. He said it was a good way to facilitate conversation and make everyone feel heard.

“There is some basic information (about the proposed wilderness) that has confused some members of our community,” he said. “The wilderness is open to everybody.”

Ferrell said he has been a long-time advocate for wilderness, so he is familiar with the fact that many have a limited understanding of what a wilderness is and is not.

Mark and Pat Parker, citizens of Clark Fork, attended the open house in hopes of finding some straightforward answers to their questions about the wilderness being proposed in their backyard.

While Pat said she used to be a proponent of wilderness, she said she’s lived long enough to see the negative impacts that such a designation can have on land. Some of these issues include predator takeover, scorched landscapes and federal takeover of wildlife and recreation management. Pat said these are all results she’s seen in other Idaho wildernesses, including the Frank Church and the Mallard-Larkins Pioneer Area.

Both said they had trouble receiving straightforward answers as to “borders, wilderness management and wildlife control.” Mark said he and many of his customers at his business in Clark Fork use the area year-round, and need to know exactly how the proposed area will be managed. He listed several of his specific concerns in his written comment submission to Risch’s office.

“Senator, we live and spend our whole lives here. We truly care about this area because we know every part of it so well,” Mark wrote.

State senator Shawn Keough attended the open house and said she appreciated seeing Sen. Risch’s staff working to make sure the concerns of locals were being heard.

Sen. Risch released a statement Wednesday about the meeting: “Thank you to those who engaged my staff in a conversation about a potential Scotchman Peaks wilderness designation,” said Risch. “There is a lot of interest in this topic, and as I have said since day one, I will not move forward until I hear directly from as many Idahoans as possible. Our office continues to welcome constituent feedback through our regional offices, our website, or at a future open house.”