The longtime Republican U.S. House member unveiled the proposal via a video posted to his website, simpson.house.gov/salmon, in which he stated, “Our system is clearly not working. So we are asking some very difficult ‘what if?’ questions. What if the dams came out? What if we were able to replace the energy from the dams? What if we came up with different ways of transporting grain? What if we created new economic engines for our communities?”

Noting that while more than $17 billion has been spent on salmon recovery and management during the past 30 years, in 2019 only 3,763 wild adult spring chinook salmon returned to spawn in Idaho — “about 4% of the historical total,” Simpson said, adding that while he is uncertain that removing the dams will save the salmon, “I am certain that if we do not take this action, we are condemning Idaho salmon to extinction.” 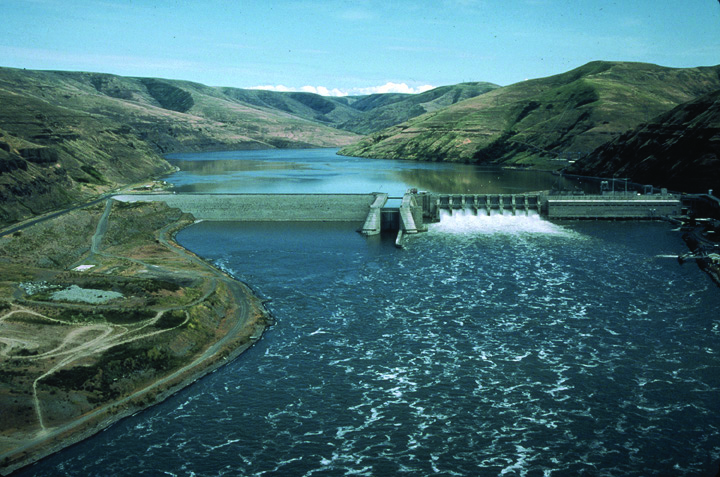 According to plan, the Lower Granite, Little Goose, Lower Monumental and Ice Harbor dams would be breached from fall 2030 to fall 2031.

Underscoring the historic nature of Simpson’s proposal — which keys in on a central component of the decades-long “salmon wars” over how to balance ecological protection with economic necessity on the Snake and Columbia rivers — the Idaho Farm Bureau in a Feb. 9 podcast noted that, “This is the first time any member of the Pacific Northwest congressional delegations has raised dam breaching and this proposal would drastically impact three state economies.”

That said, “The Idaho Farm Bureau is against breaching. The lower four dams on the Snake River produce a lot of cheap and environmentally friendly hydroelectric power to the region. The dams and the waterway allows wheat farmers, and other commodities, to cheaply export their ag products to the world,” the organization stated.

Critics also argue that removing the dams would make barge traffic impossible, threatening the flow of goods through the Columbia-Snake River system — which includes the Port of Lewiston — and imperiling one of the top three largest grain exportation hubs in the world.

Included in Simpson’s proposal are a number of efforts to mitigate the effects of breaching the dams on agriculture and industry, including $16 billion in funding to develop alternative energy energy systems to make up for the loss of low-cost hydro power; $3.5 billion expand and enhance road and rail infrastructure in order to compensate for barge traffic; and $1.25 billion to develop the Snake River Center for Advanced Energy Storage in the Lewiston-Clarkston area, with the mission of exploring technologies and methods to capture hydro, wind and solar energy on a regional scale.

The remainder of the proposed $33.5 billion appropriation — which would be earmarked as the Columbia Basin Fund and included in federal stimulus/infrastructure legislation — would go toward environmental partnerships to repair and enhance region-wide ecosystems; assisting agricultural operators with research into new waste and nutrient management solutions; and funding for a wide range of recreation, tourism and economic development projects.

While organizations such as the Farm Bureau have balked at the proposal, conservation and outdoors groups from across the tri-state Northwest have applauded Simpson’s vision.

“The proposal is bold, comprehensive, and urgently needed for Idahoans and the people of the Northwest,” stated Idaho Conservation League Executive Director Justin Hayes.

A further 10 regional and national organizations, from the Association of Northwest Steelheaders and Idaho Rivers United to the National Wildlife Federation and the Sierra Club all issued statements in support of the proposal.

“Everyone gets and everyone gives in this stouthearted proposal,” stated Giulia Good Stefani, senior attorney for the Natural Resources Defense Council. “Now is the moment to move the conversation out of the courtroom, where it has been stuck for 20 years, and craft a solution that’s built in the mighty Northwest. Rep. Simpson offers a brave vision to safeguard salmon and clean energy, while taking care to meet obligations to the Tribes and rural working communities.”