Author’s note: Two weeks ago I checked Trump’s convention speech, so it is only fair that I now look at statements from the Democrats. 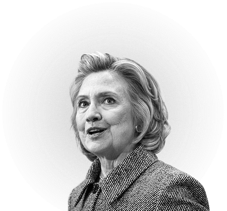 According to a Gallup poll, the 2106 Republican Convention set a record. Reporting the lowest level of support in 30 years, only 36 percent of those polled were now inclined to vote for Donald Trump. Those more likely to vote for Hillary Clinton after the Democratic Convention now stands at 45 percent.

On the first night of the Democratic Convention Bernie Sanders claimed that “Trump believes that states should actually have the right to lower the minimum wage below $7.25.” As with most issues, Trump is hard to pin down, but this statement was rated “mostly true” by Politifact.

A video shown at the Democratic Convention featured the many Trump products that are made overseas. Some of the products are made in the U.S. (suits, for example), so Politifact rated the content as “mostly true.”

In an interview done during the convention, Democratic Rep. Luis Gutierrez told Fox News that “there are fewer people crossing that border than in the last 30 years.” With the caveat that border arrests were at their lowest ever in 2011, Politifact rated this statement “mostly true.” This puts the lie to right-wing fear mongering about aliens swarming into our country.

On the second night Obama declared that the world “sees America as stronger and more respected today than when I took office.” No international poll has measured “strength and respect,” but many surveys show an approval rating higher than 2008. With this qualification Politifact found Obama’s statement “mostly true,” and this undermines the GOP’s propaganda that the U.S. is viewed negatively.

Fact checkers at USA Today found that Obama exaggerated the nation’s clean energy production. In his speech he claimed that it had doubled, but it has still gone up a respectable 40 percent.

Former Attorney General Eric Holder’s statement “one in three black men will be incarcerated in their lifetimes” was found to be mostly true; and his claim that blacks “receive sentences 20 percent longer than their white peers” was also true.

Independent billionaire Michael Bloomberg railed against Trump’s bragging about his business success. Politifact rated as “mostly true” Bloomberg’s claim that Trump hired foreign workers instead of locals at his resort in Florida.

On the second night Sen. Harry Reid warned that “Donald Trump and Mike Pence want to gamble with your retirement benefits in the stock market.” Although Trump once stated that he wanted to privatize social security, he now wants, contrary to GOP policy, to preserve it as it is. Pence follows the GOP platform that young people ought to have the right to invest their payroll deductions in the stock market.

Both Clintons have had a difficult time accepting the fact that they, along with millions of other Americans, have only gradually come to support gay marriage. So Bill Clinton’s claim in his convention speech that his wife had supported “equality” marriage all along was false.

Rev. Jesse Jackson’s claim that “we have not lost a single job, a single month” since 2009 is of course false, even though job gains have been substantial month after month. He was also incorrect when he said that the U.S. trades “more with Mexico than we do with China.”

FactCheck.org concluded that Hillary Clinton’s claim about the Children’s Health Insurance Program that she initiated as First Lady “fits with the facts.” The same fact checkers rated her claim that Obama has created “nearly 15 million new private-sector jobs” as true. R. David Edleman adds that this is “the longest streak of private-sector job growth on record”(https://go.wh.gov/MarchJobs).

Hillary was speaking the truth when she claimed that Trump refused to pay most of his bills after one Atlantic City casino went bankrupt. When the Trump Taj opened, Trump owed $70 million to 253 contractors. According to National Public Radio, “many contractors got just 33 percent of what they were owed.”

It’s time to update Politifact’s Truth-O-Meter where Trump is racking up a record number of Pants-on-Fire (If all of his statements were checked, the falsehoods would number in the hundreds). He is now at 40, more than doubling Mitt Romney’s 19 during the 2012 election.

Clinton has added two Pants-on-Fire for a total of five (her most recent one was claiming that she spoke the truth on her emails). Her percentage of true, mostly true, half true statements now stands at 71 percent. Trump’s percentage in these categories is a mere 30 percent.

Nick Gier of Moscow taught philosophy at the University of Idaho for 31 years. Read all of his columns on the election at www.NickGier.com/Election2016.pdf.