Keep calm and climb on:

Climbers, grab your gear and get ready for a special event held by Sandpoint Rock Gym; the Add-a-Move Climbing Competition and Climbing Social.

The climbing event will take place Saturday, March 26 at Sandpoint Rock Gym (in the Granary building across from Evans Brothers Coffee Roasters). Check-in begins at 9 a.m. and all participants must attend a competition overview meeting at 9:45 a.m. Climbing starts at 10 a.m. 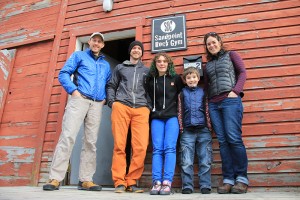 Board members and their family from left to right: Jason Luthy, Ashley Stoneham, Angela Stoneham, Micah Stoneham and board president Katie Cartier. Photo by Ben Olson.

“One of our board members is even bringing wild game to barbecue burgers, which should start around 2 p.m.,” said board member Ashley Stoneham.

It’s free to watch, but competitors will have to pay a $15 fee to climb. You can also pay $30 to climb and receive a limited edition t-shirt featuring the 36-foot battle giraffe.

The Add-a-Move Climbing Competition is similar to that old game Simon, where you have to remember the sequence of moves in increasingly difficult strings.

“One person starts with one single move,” said Stoneham. “The next person does that move and adds a move, and they continue until everyone falls off but one.”

Haven’t heard of Sandpoint Rock Gym? Shame on you! The gym is a unique nonprofit organization that opened in the Granary building in 2011 and features a creative climbing wall and training room for all levels of expertise.

“We get a wide variety of people in here,” said board president Katie Cartier. “We see a lot from the high school. We get some as young as four years old. We welcome everyone; the more the merrier.”

Cartier is president of the all-volunteer board that keeps Sandpoint Rock Gym hopping. Also on the board are Jason Luthy, Eric Fulgenzi, Ammi Midstokke and Ashley Stoneham.

The volunteer staff focuses on informal instruction and mentorship. They encourage climbers of all abilities—from newbies to veteran climbers—to stop by anytime during regular business hours on Tuesdays and Thursdays from 3 to 6 p.m. for more information. They even offer free usage of climbing shoes and chalk, so you’re out of excuses. You can literally show up with nothing but the clothes on your back and they’ll get you on the wall. 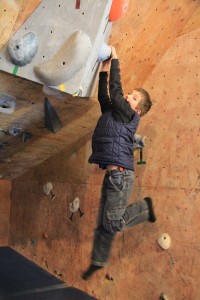 The gym operates on a member keycard system, which means members can come and climb at their convenience 24 hours a day. Memberships range from full access blocks of three, six or twelve months, as well as a limited use card pre-loaded with 10 or 20 visits.

“We have about 50 people who have memberships,” said Cartier. “Plus, we get another 25 drop-ins every week.”

The biggest draw to Sandpoint Rock Gym, perhaps, is the fact that climbers can find a community to climb with around the region, at popular hotspots like at Chimney Rock in the Selkirks.

“You meet a lot of cool people here,” said Stoneham. “A lot of times, they’ll end up taking you out to climb if you’re interested.”

Stoneham’s kids Angela, 12, and Micah, 8, were both climbing during our interview. When asked what she liked best about climbing, Angela said “I like it because at my school, no one climbs except for a couple of friends because I brought them. It’s a unique thing to do.”

Board member Jason Luthy said the most important part about the gym is building confidence so that climbers can tackle some more difficult routes in nature.

“Mostly the gym teaches movement,” he said. “It’s training to become a stronger climber. It builds more confidence on the wall and it’s a safe environment. You have flat ground and it’s close by.”

For Stoneham, the physical benefits aren’t the only reason he climbs: “It’s great for upper body, but it’s also a personal challenge against yourself. Climbing routes are like puzzles. Different body types dictate how you climb. The same route can be climbed many different ways.”

To find out more information about Sandpoint Rock Gym, including how to volunteer, as well as links to great outdoor climbs in the area, check out www.sandpointrockgym.com.