The Cedar St. Bridge is about to return to its roots.

Owners Cindy and Jeff Bond are excited to announce the launch the Cedar St. Bridge Public Market from 9 a.m. to 1 p.m. on Saturday, Nov. 26. The revamped Public Market will feature local artisans, vendors, consignment shops, produce, jewelers and gift shops aimed to cater to both locals and visitors alike.

“Our vision has always been to provide a public market with local artisans,” said Bond. “When the Bridge was built in the ‘80s, it had a vibrant public market with lots of local vendors and artisans. We want to foster the idea that the Bridge is not just a place to shop, but a community center where people can gather when the weather is foul.” 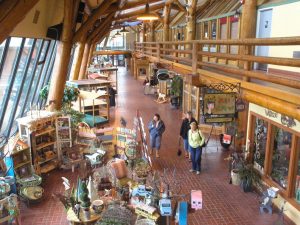 The Public Market will be open year-round, featuring special Saturday events, while offering vendor space throughout the week. According to Bond, it’s a way to promote local artisans, while also bringing attention back to the historic Cedar St. Bridge.

There will be a smattering of different options for shoppers.

“We’ll feature consignment shops as well as permanent storefront space open during regular business hours,” said Public Market Manager Patti Fulton. “There will also be a couple of farmers who will sell produce year round.”

There are over a dozen vendors already lined up to sell their wares for the grand opening. Moose Meadows Farm will sell produce grown in their indoor Clark Fork facility. Thunder’s Catch will feature fresh salmon caught and frozen in Alaska. And Ramstead Ranch will sell locally raised meat. There will also be a consignment shop called CSB Treasures, selling high-quality items for lower prices.

Vendors interested in offering their wares during the Public Market will be pleased to note they will only be charged a flat fee—no percentages of sales will be collected. During the Saturday Public Market, cart rentals will be $15 per day, and during the week, it will be $20 per day. If renting by the week, rentals will be $10 per day, and if rented by the month, rental fees are reduced to just $5 per day. Cart space is available on a first come, first serve basis by reservation only. Interested parties should contact Patti Fulton at [email protected]

The Cedar St. Bridge has a storied history in Sandpoint. It served as a walking bridge to connect downtown Sandpoint with the Train Depot until it had fallen into disrepair in the late 1970s. In 1981, local entrepreneur Scott Glickenhaus, inspired by the Ponte Vecchio marketplace-on-a-bridge in Florence, Italy, started construction on the Bridge out of tamarack timbers selectively harvested in Idaho and Montana. It opened in 1983, boasting an assortment of cart vendors, an “artisan’s corner” featuring a potter, a kite maker and specialty seamstress, as well as bookstores, jewelers and boutiques. 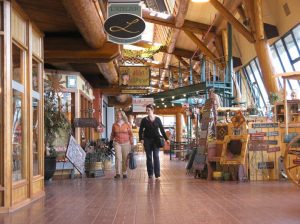 After Jeff and Cindy Bond purchased the Bridge with John Gillham in 2006, it underwent $1.25 million in renovations and repairs, but the economic downturn in 2008 slowed commerce to a standstill. Recently, as the economy is rebounding, the Bridge is bouncing back with it, featuring several storefronts that have established themselves over the past decade.

Carousel Emporium’s array of fashion, accessories and antiques has made a splash in Sandpoint. Creations features children’s toys and clothing, as well as classes catered to educational entertainment for Sandpoint youth. Meadowbrook Home and Gift has flourished in their storefront at the Bridge, and Cedar St. Bistro even has plans to expand their dining area to include an on-site coffee roaster, a wine store and tastings.

Come down to celebrate the new Cedar Street Bridge Public Market on Saturday, Nov. 26 from 9 a.m. to 1 p.m. There will be live music by Jake Robin. The Public Market will also be seeking live music, carolers, choirs and local entertainers to perform during their market times.