Like any good obsession, Charity Luthy’s affinity for mid-century art and aesthetics started randomly and quickly grew out of all proportion. 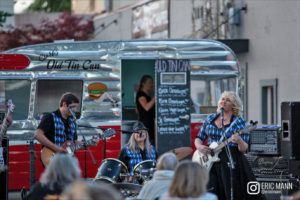 Molly Starlite and the Sputniks playing a show at MickDuff’s Beer Hall. Photo by Eric Mann.

“I got really into the 1950s vintage look while I was building my house,” she said. “As I was decorating, I went on Pinterest and kept coming back to the 1950s retro style: butterfly roof houses, Eames houses, the minimalist style. I’d always kind of liked that style, but all of a sudden I noticed that everything I was looking at was that style. It just snowballed.”

At the time, Luthy, who lives in Oldtown, was playing in the rock ’n’ roll cover band Make Me Shiver, which for 10 years toured from Priest River, Newport and Oldtown to Spokane and Seattle. But, as her love affair with the ’50s blossomed, she found herself growing restless with the genre of music she was performing.

“I just got tired of playing other people’s songs,” she said. “The whole reason I started the band in the first place was to play my own music … but that never happened.”

In the interest of self-reinvention, she chucked Bon Jovi in favor of the rock-a-billy sounds of an earlier age — albeit, inflected with the flavor of Fleetwood Mac. She hasn’t looked back.

“Now I collect old records. I think I have the entire Ray Conniff discography,” Luthy said. “It’s a lifestyle. I dress in vintage clothing all the time.”

She now goes by the pin-up/stage name of Molly Starlite and fronts Molly Starlite and the Sputniks — a four-piece comprised of her brother, Will Brock, on bass; her cousin, Jonny Mason, on lead guitar; and Ali Thomas, no relation, on drums.

The band will put on a unique show Friday, Sept. 13 at the Panida Little Theater, combining sound and stage with “Curse of the Tiki” — a scripted concert in which Molly Starlite and the Sputniks will play the part of a troupe of hotel musicians in 1962, telling the tale of a pair of honeymooners who inadvertently aroused the dangerous spirit of an island deity.

According to Luthy, the concept of a rock-a-billy opera sprung from the date of the show.

“My brain immediately went to, ‘What if we did a curse of the tiki for Friday the 13th?’ Again, it snowballed,” she said.

The band came up with four new songs that chronicled the ill-fated (or not?) nuptial celebration: from the start of the couple’s honeymoon to the climax, so to speak, of the cursed Hawaiian getaway. Those tunes will be intermingled with Molly Starlite and the Sputniks’ repertoire, inviting the audience to participate as if they were fellow guests at the honeymoon hotel, hearing the story as they relax on their own vacations.

“It’s a thematic project,” said Luthy. “It’s got tropical stuff — Ali [the drummer] has brought in extra drums to give it sort of that tribal feel to it.”

To complete the motif, Luthy said the Little Theater will be decked out in Polynesian style, with a bamboo-and-tiki-head selfie station, backlit palm trees to complete the sunset-Pacific-island feel and tropical drinks and snacks. Her brother-in-law, with a background in radio, will provide narration. With lyrics projected onto a screen behind the band, Luthy said it’s going to be a tall order to pull off, but she’s confident.

“Our timing has got to be dead on,” she said. “It’s been a real big creative undertaking for me.”

A spirit of inventiveness and DIY-ism typifies the band, which Luthy describes as “a real family affair.” Not only does she play alongside her brother and cousin, but her mom built all the set pieces, her husband runs sound, her son will handle the video presentation, her sister and brother-in-law produced the band’s CDs and her dad — as dads do — generally helps out.

While it takes a village to put on a show as ambitious as “Curse of the Tiki,” the band’s sound is a product of Luthy’s direction. She describes Molly Starlite and the Sputniks as a rock-a-billy band “with more hooks than your uncle’s tackle box.” That bears some unpacking.

Luthy said her main complaint with the rock-a-billy genre is that those songs “all kind of sound alike.”

“I like to take that rock-a-billy foundation and add unusual beats and melodies and different instrumentation,” she said. “We like to add things that you wouldn’t expect in a rock-a-billy sound.”

To illustrate, Luthy pointed to songs like “Over the Moon,” which takes a sly, disapproving look at the notion of “friends with benefits” and “Swipe Right,” which treats online dating with a distinctly retro vibe.

“It’s a rock-a-billy song but you’re talking about something that’s modern,” she said.

Throw in that inventive instrumentation, including melotron, mandolin and banjo, plus poppy hooks, and you’ve got a one-of-a-kind musical experiment.

Asked if she’d ever attempted anything like “Curse of Tiki” before, Luthy answered quickly and with a laugh: “No. … I hope we can pull it off.”

In the meantime, the band is furiously hunting up as many leis as possible. Wear ’em if you got ’em.