If you live in North Idaho and haven’t seen a Shook Twins show, you might want to get your head examined. Over the years, we’ve watched these Sandpoint darlings launch their successful career in music, playing to larger and larger audiences in their quest to bring love and community back to the forefront of the music industry.

Twin sisters Katelyn and Laurie Shook were born and raised in Sandpoint and have always kept this little gem in North Idaho as a sacred place in their hearts. As part of their love for community, the Shooks return every year around Thanksgiving for a special holiday show at the Panida Theater. While in years past, the duo have featured performances with just the two of them, or special musical guests, this year, Shook Twins will showcase their full band, including Niko Slice on the lead guitar, Barra Brown on drums and Josh Simon on bass. 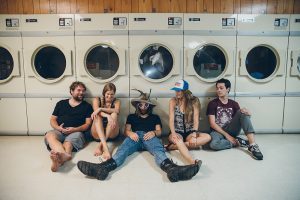 The “Giving Thanks” show is presented this year by the Panida Theater and Sandpoint Reader. It will take place on Saturday, Nov. 26, at the Panida’s main stage. Doors open at 6:30 p.m. and the show begins at 7:30 p.m. Along with Shook Twins, the ever popular John Craigie will be opening the show with special musical guests Brad Parsons, J Cobb and Tyler Thompson from Portland, Ore. Tickets are $15 in advance and $20 the day of the show. They are available at Eichardt’s Pub, Pedro’s and online at www.Panida.org. These shows have sold out in the past, so don’t delay in obtaining your tickets early.

I gave Katelyn Shook a call earlier this week and talked to her about the upcoming event, the latest album in the works, and a once-in-a-lifetime moment where they got to meet and open for their idol, Ani DiFranco.

Ben Olson: So, Katelyn, what’s been going on lately?

Katelyn Shook: Well, we’ve been on tour most of the month, which has been going good. We went on a short tour after we played Red Rocks. Oh man, that show… once you go that high, it’s hard to go down low.

BO: That’s right, you opened for Ani DiFranco! What was that experience like?

KS: It was by far the best night of our lives, career-wise at least. The whole day felt surreal. It was a stressful day. I wasn’t nervous about performing. We got 35 minutes and we felt solid, but I was worried about the level of expectation I had.

BO: How many people were in the audience?

KS: I think around 8,500 people, which is way more than I expected. But they were seated and they were paying attention. Our set went great and we were so pumped. They even gave us a standing ovation.

BO: How did this all come about?

KS: Gregory Alan Isakov picked us. It wasn’t favoritism [Laurie Shook and Isakov are currently dating]. He had a lot of people on the list, but none of them were as pumped about playing with Ani as we were. He knew we loved Ani and wanted to make our dreams come true. … Four days before, we did a cover video of a song we do of Ani’s and we sent it to her through our mutual booking agent. … After our set, when we were sitting in the audience listening, she thanked the Shook Twins and started playing that song we had covered of hers, and she said, “This one goes out to the Shook Twins, who did an amazing cover of this song.” Laurie and I held hands the entire song, which is a big deal because we don’t really touch each other much. The whole night was perfect.

BO: Was it hard to go back to tour after such a huge show?

KS: Yeah, it was literally so high and then so low. Some of our shows were really bad after that. Nobody seemed to care. I was so frustrated with humanity, also with the state of the country. … Why do people spend money to come to a show and then talk to their friends the whole time? I think the biggest part of the equation is that we’re behind this veil, that we’re impervious when people are in the front row talking loudly. I think they don’t realize that they are part of the show too, the audience.

BO: Are you guys working on any new material? Is there an album in the works?

KS: We’re actually finished tracking everything for our next album. We’re working at a studio in Portland called Hallowed Halls. We’re trying to get to the next step and get mixing, hoping for a spring release. In August, we released one of the singles from it called “Call Me Out.” It’s a different thing for us. It’s a little more dancy, more pop produced.

BO: What does it mean to the band to return to the Panida every Thanksgiving for these holiday shows?

KS: I like the fact that when we come home every year for Thanksgiving. It’s one of my favorite holidays. All the people I love come back to Sandpoint at that time and it’s a great opportunity to show them what we’re doing and give them something special. The Panida is the most comfortable venue in Sandpoint.

BO: Any surprises this year?

KS: This is the first time we’re going to have the whole band. The past couple years Niko hasn’t been able to come. Our drummer is new and has never played Sandpoint with us. We also have a new bass player named Josh Simon. And, John Craigie will be opening for us again. He’s always with us for these shows, but this time, he’s got some homies from Portland joining him – Brad Parsons, and J Cobb and Tyler Thompson from the band Fruition.

BO: Any final words for your fans?

KS: We just can’t wait to show you what we’ve been doing! We’re really excited to see everyone again!

Shook Twins will be playing the Panida Theater on Saturday, Nov. 26 at 7:30 p.m. Tickets are available in advance for $15 from Eichardt’s Pub, Pedro’s and online at www.Panida.org. If any remain, they will be for sale the day of the show for $20.