What began as a road trip in an aggressively green 1977 Dodge camper to collect Idahoans’ stories about health care with her husband, Garrett, and their friend, Luke Mayville, has brought Emily Strizich from the front lines of the issue to the visual forefront.

The Reader caught up with Reclaim Idaho’s leading lady shortly after she returned from Boise, where all verified petition signatures from every Idaho county were delivered to the capitol on July 6, bringing a ballot initiative to expand Medicaid one step closer to fruition.

It was also on that Boise trip that Strizich was formally introduced as co-chair of Idahoans for Healthcare along with Republican state representative Christy Perry. The group is a coalition of healthcare providers, business figures, community groups and grassroots activists looking to close the “healthcare coverage gap.” 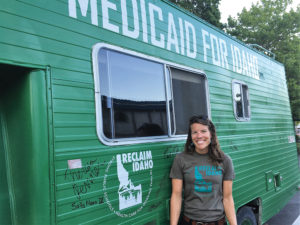 Idaho Secretary of State Lawerence Denney announced Tuesday that the initiative had officially qualified for the state’s November ballot.

Sandpoint Reader: Looking back on when you guys started Reclaim Idaho, did you ever imagine this is where you’d end up?

Emily Strizich: Oh, gosh no! When we started we just wanted to hear from the people of Idaho about what their experience had been like with the health care system. We were just trying to composite those stories — we didn’t, when we started, have any idea we’d do a ballot initiative. There were a lot of reasons we didn’t think it was possible. Conventional wisdom said it would cost millions of dollars and that it would take a massive volunteer effort to pull it off. There were a lot of reasons why it should have never succeeded, but I think the fact that we did speaks to this groundswell of support for common-sense solutions and the desire people have to take action to better their state instead of feeling helpless and hopeless. So no, we had no clue — we were just three yahoos driving around the state in the Medicaid Mobile who had no idea what this would become, and it’s really incredible to see.

SR: I’m really interested in this emphasis on the bipartisan effort reflected by the Idahoans for Healthcare co-chairs being you and Christy Perry. Can you break down for our readers how this is not a partisan issue?

ES: It’s so important to take the politics out of the issue all around. Politics has gotten in the way of closing the Medicaid coverage gap for six years, so to us the idea that the voters get to decide is pretty powerful. I work in Orofino, where they voted 75 percent for Trump. But when we go down there, 75 percent of the people will happily sign the petition and support the cause. It’s a small, vocal minority that opposes this. Christy Perry’s involvement speaks to the fact that, look, we are just trying to help people. Cancer doesn’t care if you’re a democrat or republican or independent, so why should we let politics get in the way? And that’s really what we heard out on the road. People are sick of politicians playing politics with people’s lives.

SR: Outside of ideological opposition, people are worried about the cost. What will it cost Idahoans if we expand Medicaid?

ES: Actually this will save our state millions of dollars. We’re already paying the federal taxes into this program, but that money is going to 33 other states that have expanded Medicaid. Right now, by law, if someone is uninsured and breaks their leg and ends up at the hospital, the hospital is required to treat them. If they can’t pay, that bill goes to the Indigent Care Fund, which is then billed to people’s property taxes. Essentially, we’re paying twice for people to get emergent care. But, for example, we know if someone goes to the emergency room to treat their blood pressure, it’s obviously a more expensive visit than if they had been able to get the preventative care that they needed.

Something to note is that Butch Otter commissioned a study in 2012 that projected all the different savings that would happen if we expanded Medicaid, and I know for 2019 alone that Idaho would save $25.7 million because we wouldn’t be paying into the indigent funds, and people would be getting less-costly care. The Medicaid program is funded 90-percent federally, and Idaho is only responsible for 10 percent, and that 10 percent is really easily absorbed by what we’re currently paying for indigent care — it’s nothing compared to what we’re currently paying. You can find a good break down on www.reclaimidaho.org.

SR: What do you think is the biggest hurdle in earning votes for this initiative? 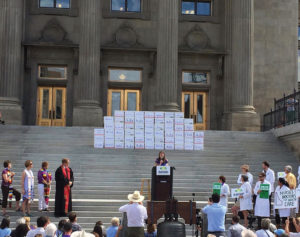 Emily Strizich talking on the steps of the Idaho State Capitol building in Boise July 6.

ES: I don’t see an enormous hurdle for us. Reclaim Idaho does a great ground game, so I think we’re going to continue getting out and talking to voters. When you talk to voters and explain the facts, it’s a no-brainer. There is this huge misinformation campaign that’s starting to generate media, so I think that could potentially get in the way. But it all really depends on voter contact. If we can get out and let people know how the expansion will benefit Idaho not only financially but also from the morally compassionate side of things, we’ll win.

SR: Why, on a personal note, is expanding Medicaid coverage for Idahoans so important to you?

ES: In my professional role, I’m a pediatric occupational therapist. A lot of the kids I work with are covered, but oftentimes their family is not. I see how chronic illness and inability to access healthcare affects families and the instability that that creates.

I always tell the story of our very first (Medicaid Mobile) tour stop in Bonners Ferry. I was so annoyed, like, “Oh my gosh, we’re really spending our summer doing this? Driving this camper around the state? You guys are crazy.” One of the first doors I knocked on was this woman who was having to decide if she was going to sell her home in order to pay for treatment for a terminal condition, and if she did sell her home, she was going to make her husband, her two grandchildren and her adult sister homeless. She was literally grappling with this life-or-death decision to figure out if her life was worth saving over creating this chaos in her family’s life. She said, “(My doctors) told me to call my senators, and I don’t know what a GoFundMe page is but my daughter is trying to help me make one.” So here’s this woman, who’s dying, and her doctors are telling her to make a GoFundMe page? From that moment on I felt this duty to advocate for people like her. I just thought, “Holy crap. I don’t care how many times we break down driving around this state, we have to help these people.” Because the people who are supposed to be helping, aren’t.