With the recent legalization of recreational marijuana in Canada, Idaho is rapidly becoming the last state standing

With Canada’s passage of legalized marijuana in June, it joins Montana, Washington, Oregon and Nevada as a government bordering Idaho that has adopted more a more lenient approach to marijuana. Even Utah, a state that in most respects matches Idaho blow-for-blow in conservative Republican credibility, has legalized CBD oil, a cannabis-derived health product that lacks the intoxicating THC compound. 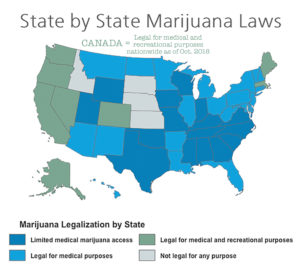 Idaho’s resistance to the legalization movement sweeping across western states complicates matters for state law enforcement, which largely oppose any softening of drug laws. And it stands as a rare issue uniting elements of both the right and left, who call the status quo a draconian approach that cuts against individual liberty.

On both the right and left wings of Idaho’s political spectrum, cannabis legalization is a deeply personal issue. Indeed, for one North Idaho conservative libertarian — let’s call him Henry — it’s how life stays manageable for his family. Henry requested anonymity due to the deeply personal nature of his story, which began when his wife was diagnosed with a rare and painful form of cancer.

“She is able to use CBD and oils … that contain almost zero THC but that are currently illegal in Idaho,” he said. “Her pain is very manageable with these products, and she can function normally for the most part. At some point she may need to use THC-based products for pain and nausea.”

Likewise, Idaho State Representative Minority Leader Mat Erpelding, D-Boise, remembers a friend — a nationally-renowned athlete, no less — who died tragically of stomach cancer. A California resident, he had the option of choosing between medical marijuana or opioids to manage his pain. Because of that choice, he was able be present for his two daughters until his final days.

“If he had been on opioids, he wouldn’t have been able to do that,” Erpelding said.

It’s because of stories like these that many Idahoans support the legalization of medical marijuana. Still others, both conservatives and liberals, don’t believe marijuana to be the social scourge its opponents brand it and support full legalization for recreational use.

“We are fully in favor of complete legalization,” said Henry. “In fact, if it were legalized, we would open a dispensary and church combination in Sandpoint to spread the love. Our fellow church friends and members may disagree, but what does freedom mean to you?”

But many Idaho law enforcement officials disagree. According to Kieran Donahue, Canyon County sheriff and president of the Idaho Sheriff’s Association, states that justify legalizing marijuana for the additional tax revenue may one day regret the decision.

“Marijuana is unequivocally a gateway drug, period,” he said. “There’s no argument that can defeat the fact that it’s a gateway drug.”

Donahue’s opinions are informed by his experiences in the High Intensity Drug Trafficking Area program. A federal program consisting of 28 zones, HIDTA coordinates efforts between federal, state and local law enforcement in combating the drug trade in its highest-trafficked zones. According to Donahue, who works on the HIDTA zone spanning from southwestern Idaho to Portland, Ore., he has seen the destructive effects of drugs — including marijuana — firsthand.

For that and other reasons, the Idaho Sheriff’s Association and other Idaho law enforcement organizations oppose legalization in any form, whether it be medical or recreational.

With Idaho resolute as the lone island of prohibition in a sea of leniency, state legislators grapple with the complications that poses.

Erpelding is primarily concerned about the problems of transporting otherwise-legally-obtained marijuana. Individuals traveling the interstate who cross the Idaho border with dispensary marijuana in their possession are taking a massive legal risk they might not be fully aware of. And should they be caught by state or local law enforcement, the consequences can be severe. Erpelding is particularly concerned about college students, who are at risk of losing their financial aid.

“It’s just increasingly clear to me that this is a drug that has been criminalized at a level that is inappropriate,” he said.

Idaho’s proximity to marijuana-friendly states has manifested some more unexpected complications, too. KTVB reports that law enforcement offices bordering Oregon had difficulty filling open positions because so many prospective employees had used marijuana. It was a significant-enough problem that in 2017, state lawmakers loosened restrictions on drug-use history for law enforcement jobs.

Of particular concern to Rep. Dorothy Moon, R-Stanley, is the boost to incarceration rates resulting from interstate travel. The Idaho State Journal reports that with a growing state inmate population pushing existing jails and prisons to the breaking point, Idaho officials are considering a $439 million prison expansion. Among the additions would be a new 1,510-bed  state prison. Non-violent drug offenses accounted for more than half the prison sentences over the previous year, while violent crime represented only 20 percent.

Moon believes that is an untenable situation, and she opposes the construction of new facilities as a solution to the problem. 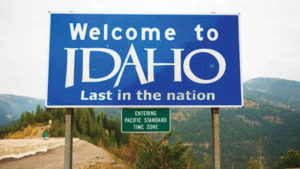 “There are too many people in jail who I think don’t belong there,” she said.

But moving Idaho in a direction less at odds with its neighbors is easier said than done. Lawmakers got a taste of that this year when Moon’s bill to legalize CBD oil failed to make it out of committee.

Moon didn’t have much of an opinion about CBD oil until she ran for office. Then she couldn’t hear the end of it. Her constituents told her the product was essential in managing their health issues.

“I hadn’t even thought about it, but when I was running for office, every town I stopped in, people asked, ‘What do you think about CBD oil?’” she said.

Moon’s bill, which Erpelding co-sponsored, passed the House in a 59-11 vote, and Moon believed it could achieve a veto-proof majority if it advanced. But when it reached the Senate, Health and Welfare Committee Chairman Lee Heider put a stop to any discussion. Instead, he shuttled lawmakers to his office in violation of Idaho’s open meeting law. While the lawmakers were cloistered away, Associated Press reporters recorded Heider shouting, “The governor’s office doesn’t want this bill, the prosecutors don’t want this bill, the office on drug policy doesn’t want this bill.”

Moon believes Heider was acting on a request from the governor’s office to squash the bill in committee. Gov. C.L. “Butch” Otter previously killed a 2015 bill legalizing CBD oil for children with epilepsy.

“Actually, (Heider) was good with it up until the governor told him not to be good with it,” Moon said.

Undeterred by the incident, Moon intends to introduce a new CBD oil bill next legislative session. This time, she aims to start the bill in the Senate, making the biggest potential hurdle the first to overcome.

“I’m feel very confident that if we get it through the Senate, we’ll have enough votes to override a veto,” Moon said.

Whether or not CBD oil supporters will face a hostile executive branch in 2019 is another question entirely. Republican candidate Brad Little maintains a markedly softer opinion on CBD oil than Otter, saying in a Spokesman-Review interview that he has no problem if its quality is controlled. Democratic candidate Paulette Jordan, meanwhile, supports legalizing both CBD oil and medial marijuana, as well as decriminalizing marijuana possession.

Whatever the case, it’s clear an ideologically diverse group will be moving the bill toward the end zone. While Erpelding prefers simply decriminalizing CBD oil over Moon’s proposed prescription system, he said he still intends to join his Republican colleague in supporting it. He’d like to see the conversation continue toward a discussion over legalized medical marijuana.

“I have found that there is a libertarian streak in both the Democratic and certain elements of the Republican party,” said Erpelding. “That streak is a … desire to not regulate things that shouldn’t be over-regulated.”

Similarly, the Idaho Freedom Foundation, an influential conservative-libertarian group, called for the state to rethink its marijuana policy as early as 2016.

“The main issue has to do with Idahoans making their own medical choices, and those choices being criminalized,” wrote IFF President Wayne Hoffman in an editorial. “We must ask whether cannabis crimes are worth requiring working men and women to give up their day jobs and sources of income to sit on a jury that will deliberate on a punishment where only the drug user was impacted and where, in many instances, the user is arguably helped through marijuana use.”

For a conservative libertarian like Henry, the popular anti-cannabis stance of the GOP represents an inconsistency in values. He considers Idaho a haven for people who object to the big governments and heavy regulation of states like California. On other issues like cannabis, however, he believes the old guard of the GOP is also guilty of infringing upon individual liberty.

“It’s OK to be a hardcore conservative and believe in the many uses of cannabis/marijuana, but the challenge is keeping Idaho a conservative state for all the other freedoms we enjoy and not turning into a sanctuary city/state like California,” he said. “It’s something that may never happen, but we are up for the challenge.”

According to Moon, the legalization of CBD oil enjoys broad support, and some Idaho politicians are willing to have a conversation about legalized medical marijuana. Recreational marijuana, however, is a step too far for the vast majority of the Legislature, and Moon counts herself among that number. Nevertheless, given the problems resulting from state’s proximity to marijuana-friendly states, she believes something about Idaho’s drug enforcement policy has to change.

“I think sometimes you have to see — and I hate to use this terminology — the greater good,” she said.