Emily Articulated: Get inspired by the Mirnavator

It’s not every day one gets to interview a person featured in the Wall Street Journal, on NBC Nightly News, and in Runner’s World magazine; someone sponsored by REI, Merrell, and JCPenney and one of the 2018 National Geographic Adventurers of the Year. But under the Monday morning sun, bumming the free wifi outside of a coffee shop in Kalispell, Mont., that’s exactly what I did.

As I pressed the ringing phone against my ear, I wiped the sweat off my palm, silently reminding myself not to engage in a nearly-inevitable, nervousness-induced, awkwardly-shrill fangirl laugh as Mirna Valerio picked up the phone.

Navigating Atlanta, Ga., traffic on her way to the airport, Mirna answered my call with the warmth and ease I could only hope for in a public figure.

After engaging in happy small talk, with shared giggles at the abomination of slow left-lane drivers, I began my interview, prompting Mirna to start her story from the beginning.

Growing up in Brooklyn, New York, Mirna lived with her working-class family, roaming her childhood neighborhood in a pack of siblings, cousins, and friends, inventing games, and engaging in the creative play inevitable with stretched means. She described, “We were poor, but so was everybody else. What we had was wealth in family.”

As a teenager, Mirna’s family enrolled her in boarding school with the intention of affording her the opportunity to thrive in a new, more controlled environment.

On her first day of high school, having fantasized about being on a team, Mirna found herself standing in front of the sports fields. Drawn to the group of girls engaging in casual camaraderie and banter, she wandered into the beginning of what would transform her life; field hockey tryouts.

But this is not the story of a field hockey phenom. It’s not the coming-of-age profile of a six-pack-sculpted athlete acquiring a bounty of first-place trophies. It is the story of Mirna Valerio, the plus-sized trail and ultra runner, body-positivity ambassador and self-empowerment queen.

Tryouts began with the blow of a whistle and jogging a warm-up lap in the grass around the field. As she finished the loop among the back of the pack, her muscles strained and her lungs burned. It was the longest she’d ever run, and the newness of it all ignited something inside of her.

Finishing the practice after a timed mile, sprint repeats, and more physical exertion than she knew possible, Mirna’s new coach approached her with encouragement that she’d carry well into her future. “You’re doing a great job, and seeing your effort, you clearly want it. You’re on the team.”

In an attempt to improve physically, Mirna introduced running into her daily routine; a habit that lasted beyond her field hockey days into college. Attending Oberlin Conservatory of Music, she earned degrees in both music and Spanish and entered the workforce as a classically-trained vocal performance artist.

Shifting from auditions and cold calls to working as a paralegal in corporate America and eventually to teaching music, Mirna continued on her dynamic path with running and physical activity as one of her few constants.

Eventually taking a job that pulled her and her young son away from her husband working in New York City, Mirna spiraled into a life of too many responsibilities, too little clout and consequential stress. She stopped running, was plagued by headaches and anxiety, and gained weight. Lots of weight.

One afternoon, in the middle of bustling traffic and a balancing act of jobs, side jobs, motherhood and more commitments than she could possibly manage, Mirna experienced a rapid loss breath and jolt of pain bursting through her chest. 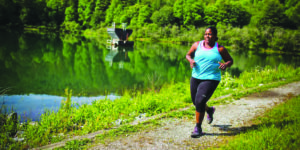 An hour later, she was in an emergency room consultation with a cardiologist, giving her the news that would upend her world. He said, “If you don’t change your life, you won’t live to see your son grow up.”

So she changed her life.

Starting with trudging a mile on her previously unused treadmill to eventually signing up for a marathon, she fell back in love with how running and physical activity made her feel, even though she was slow.

Her headaches disappeared, she began sleeping better and she was able to manage her anxiety and stress. What she didn’t lose, however, was some of the weight. After losing 70 pounds, her body plateaued at the 250 pounds she is today.

Newly immersed in the world of stick figure bodies, extra-small shorts, and trails rarely traveled by anyone that looked like her, Mirna began writing a humorous blog about her experiences as a plus-size runner.

“Fat Girl Running,” was an unabashed compilation of running anecdotes, its challenges, her triumphs, and her failures as someone society considers fat.

Her blog was picked up by The Wall Street Journal, who featured her story of body-acceptance and redefined fitness. From there, she was profiled in Runner’s World, and on NBC Nightly news, and gained sponsorship from JCPenney, simply from owning her truth.

She’s big. And has competed in races all over the world, with distances up to 120 miles. She was acclaimed by National Geographic as a 2018 Adventurer of the Year, and travels the country sharing her story, promoting body-positivity, and encouraging others to find their own adventure, regardless of what it looks like.

“Adventure is what you make it,” she said. “Look at your life right now and find ways to step outside of your comfort zone in your own way. It’s your story, after all.”

Meet Mirna Valerio at Evan’s Brothers tonight, Thursday, July 19, at 6:30 p.m. as she discusses, “The Power of Visibility.”