Misophonia: The rage is real

Affection can be expressed by holding hands, offering a kind word or leaving a sweet note on the countertop. 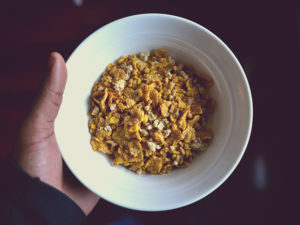 My personal favorite act of affection is when my boyfriend hands me my box of off-brand corn flake cereal.

In my early teen years I started to become enraged. I’m not saying irritated, bothered or even angry — I’m saying enraged. This rage came about under very specific circumstances and soon enough, the pattern became obvious: I lost control of my emotions when I heard people eating.

Soon I noticed all mouth and respiratory noises upset me.

I couldn’t redirect my attention. I obsessed over the noise. I sweat. Tears welled in my eyes. My fight or flight response flared. I felt like punching something or screaming would relieve the tension. The source of the noise would carry on nonchalantly while I stood by feeling disgusted, guilty and confused.

To this day, I can’t say much has changed. Crunchy snacks are my solace — lately, it’s dry cereal eaten by the handful in harmony with the TV, the dog chewing on her toy and my boyfriend enjoying a bowl of ice cream.

But the prospect of sitting in silence while the person next to me licks a spoon repeatedly? Just typing that last sentence made me clench my teeth. Alex knows that if he’s eating, I better be eating, and the more audible stimulants, the better.

Mastication obviously falls under the “undesirable noise” category, along with pen clicking and nails on a chalkboard. But there’s a difference between disliking a sound and experiencing a severe neurological response when it’s heard. The latter has a name: misophonia.

A March 18 NPR article titled “Misophonia: When Life’s Noises Drive You Mad” created some buzz surrounding the difference between those who think “that’s an unpleasant noise” and those who think “I will drive my head through this wall if he clears his throat one more time.”

While mouth sounds are the most common misophonia triggers, NPR reports that humming, tapping or even certain smells can cause flare-ups, resulting in uncontrollable emotion and often hurting the feelings of the person making the noise simply because they don’t understand that what they’re producing is unbearable.

Misophonia is largely ignored, misunderstood or misdiagnosed as a mood disorder. Perhaps the most groundbreaking study, conducted by the University of Iowa in 2017, found common triggers like eating and breathing stimulated the emotional part of the brain in misophoniacs. Marsha Johnson, a Portland audiologist who specializes in misophonia, said the brain study “was the first piece of research that showed our population that what they had was real.”

Because misophonia isn’t yet fully understood, treatments are scarce. According to Harvard Medical School, “auditory distraction (with white noise or headphones) and cognitive behavioral therapy have shown some success in improving functioning.” The Misophonia Association, an advocacy group for those with the disorder, was just formed in 2013.

While I can’t say misophonia has seriously hindered my ability to participate in the world, it has given me an inordinate appreciation for headphones and a knack for packing crunchy foods with me just in case I’m faced with a chip-eating stranger in a confined space.

But for those who build their life around avoiding their triggers, this research is a big deal. It’s hard to explain to people that the sound of their breathing makes you want to vomit without offending them. Hopefully the science can provide some reasonable explanation and help eliminate the tension that arises when you politely excuse yourself from triggering environments.

I’ve been lucky enough to find a partner who knows that if he’s going to the kitchen to grab himself some dessert, he better bring back my cereal, too. I can only hope my fellow misophoniacs find that kind of understanding in their lives.