Bringing the herd together

If there’s one word that encapsulates the Carousel of Smiles restoration project for Reno Hutchison, it’s “magic.” Reno and her husband Clay have brought the restoration of this one-of-a-kind vintage carousel to a fine gallop over the past few years, and they are now excited to bring the community project into the home stretch to help it find its permanent home in Sandpoint.

The Hutchisons gave a presentation Dec. 16 before the Sandpoint City Council, outlining where the project stands and highlighting the amazing work their volunteers have done to make this dream a reality. The Hutchisons asked council to include the carousel in the city parks and recreation master plan, which was approved, with two potential locations earmarked where the carousel might live: Sandpoint City Beach and the parking lot adjacent to the Sand Creek Trail on the west side of City Beach. 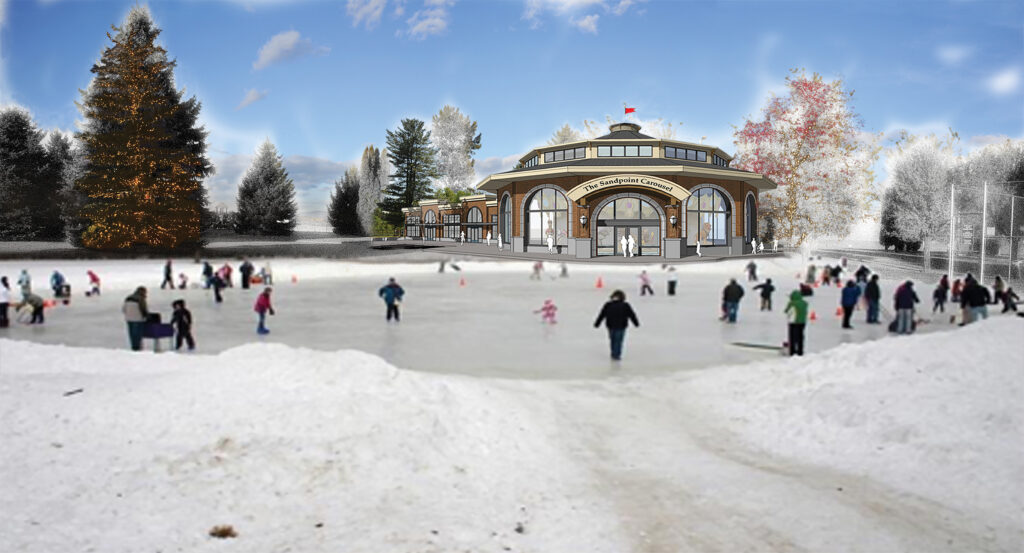 An artist’s rendition of how the Carousel of Smiles would look situated at the Sandpoint City Beach, with an ice skating rink in the foregound. Courtesy image.

The story began almost 70 years ago when a traveling fair in Kansas shut down for the season and never reopened, leaving the 40-foot diameter 1920 Allen Herschell carousel to be packed away into two trailers and stored on a sheep farm.

The relic lay there forgotten from time until the Hutchisons purchased it in 2000, saving it from being broken up and sold off in pieces like so many of the few surviving Golden Age carousels.

After unpacking the trailers in 2016 and unveiling the historic carousel to Sandpoint for the first time, the Hutchisons realized this was going to be a project that would capture the interest and fancy of the entire community.

“The passion has been incredible for this project,” Clay told the Reader. “We’ve probably had 200 people work with us in different capacities over the years.”

Some of the volunteers have helped with a single event, while others have been in it for the long haul, assisting with all the minute details to historically preserve this carousel for the ages.

Now, four years into the meticulous restoration process, the Hutchisons and their army of volunteers are starting to see some progress. 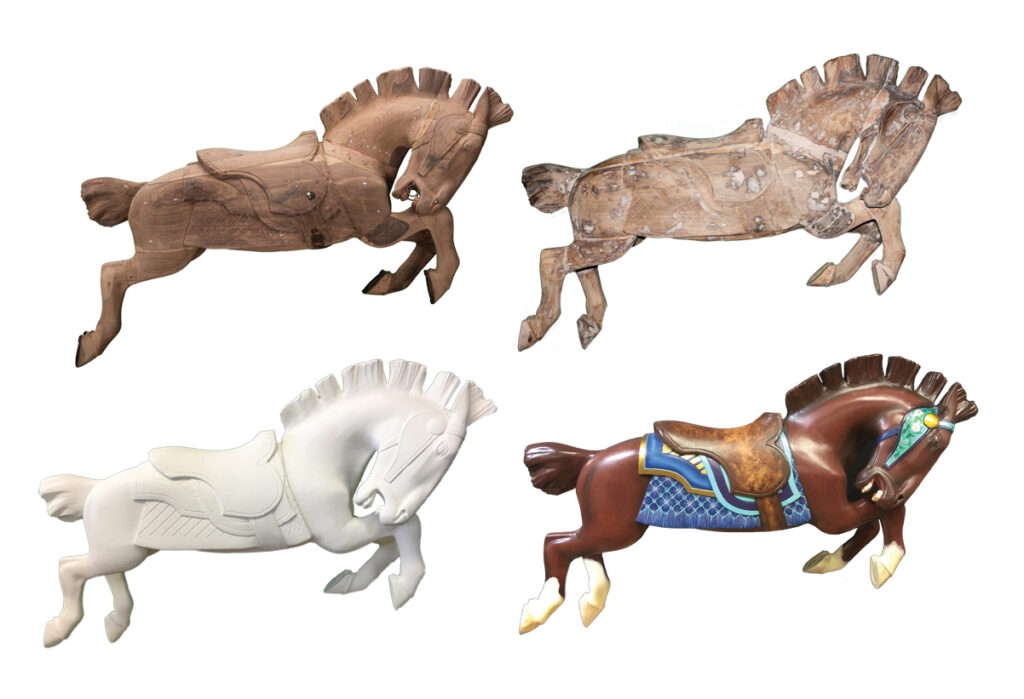 The four stages of reconstruction on a horse named Capt’n Jack, including wood restoration, primer and final paint.

“We have 11 horses now in paint, and of those almost all of them are now ready to have the clear coat on them,” Reno said. “It’s a polyurethane coating that gives extra hardness and protection.”

On top of those, there are another six horses that have had all the wood restoration completed and are in the final stages of primer. With a total of 36 horses to restore, they are well on their way to bringing the herd together, so to speak.

“The wood restoration is quite a process,” Reno said. “We completely dismantle each horse. Every leg comes off, the head comes off. We get down to the original lamination.”

Along with local volunteers, the Hutchisons have relied on a variety of local businesses to assist in restoration. Northwest Autobody painted the center pole, heads were painted by Route 66 Autobody and sandblasting was done by Full Circle Powder Coating. Satisfaction Painting has also chipped in to help with their expertise.

“Just about any company we’ve asked to help has been willing to jump in and give their time and talent,” Reno said. “What I love so much is that people have been really interested in the behind-the-scenes work, as well.”

The artistry and high craftsmanship of that work has even drawn Idaho art officials to go so far as to suggest the carousel may represent the biggest public art project in the state — itself a potential draw for visitors and future events.

Meanwhile, the Hutchisons estimate they are about a third done with the full project, but liken it to a snowball gathering speed. 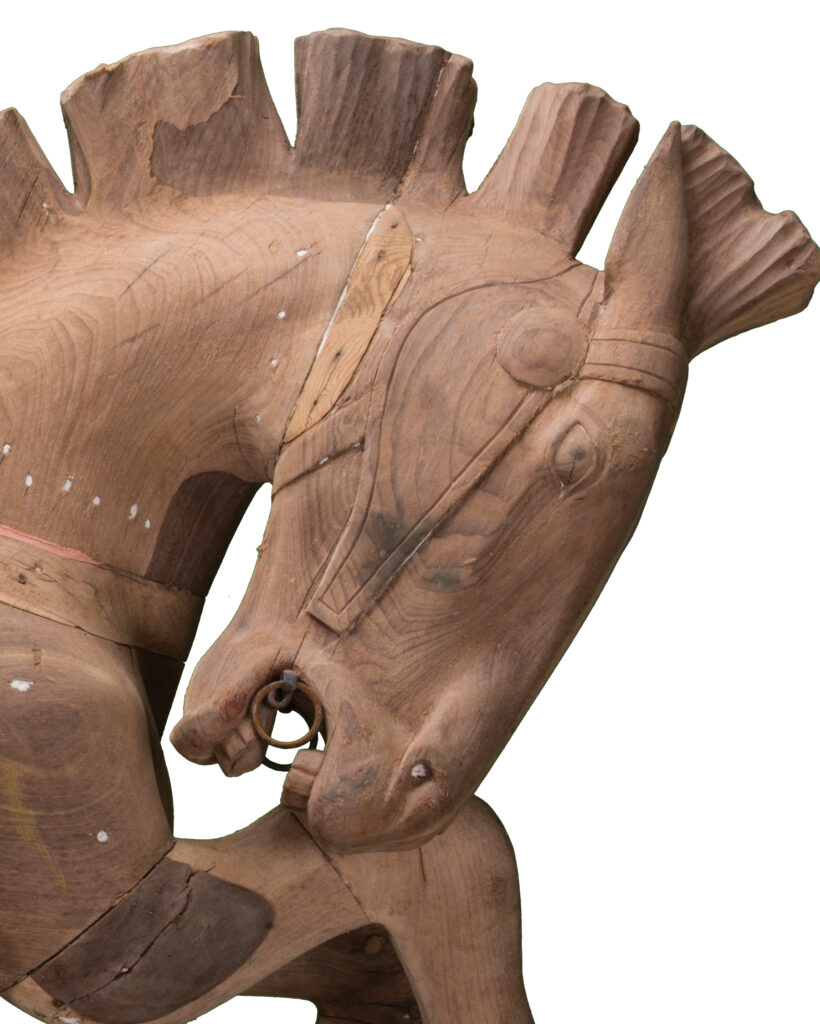 A close-up view of Capt’n Jack’s head before reconstruction and painting.

“The momentum is building,” Clay said. “It’s taken us four years to get a third of the way and will probably take two-and-a-half more years to reach the finish line.”

They estimate the restoration will be completed by 2023, with the aim to install the Carousel of Smiles in a permanent — and prominent — location in Sandpoint.

Of the two potential locations discussed at the Dec. 16 council meeting – the parking lot adjacent to the Sand Creek Trail just southeast of the Bridge Street Bridge and the Sandpoint City Beach – The Hutchisons prefer the Beach.

“Personally, I don’t think [the Sand Creek Trail parking lot] location has the same potential to create the synergy and to have events down there as the City Beach, especially if there are plans to put a skating rink at the beach in the winter,” Reno said. “I think the carousel would feel removed from those events if it was on the other side of the bridge. I think what can happen at the beach with the carousel would be so positive.

“That’s where I’ve dreamed about it being forever,” she added. “I think a lot of people feel that way, too. It’s a natural fit there.”

“Certainly the carousel would be a stand out at the beach,” Clay said. “You’d see this beautiful building from the highway and it would help that area shine better. It will also relate to events that will be down there [at the beach].”

Council members lauded the Hutchisons for their work on the project, and expressed excitement in helping the carousel find its permanent home.

“This is such a beautiful story, and an amazing vision,” Council President Shannon Sherman said. “I’m excited for my family and all the families in Sandpoint to be able to experience this.”

Council member Deb Ruehle agreed: “I appreciate all the time and effort and reaching out on a national level that you put into this. I think it’ll bring beautiful things to Sandpoint.”

After four years of work on the project, Clay and Reno said they’ve learned a lot about both the carousel and the community.

“This town gets behind projects and supports projects like I’ve never seen anywhere else,” Reno said. “The volunteers, the businesses, the way this community has come together to support the project has absolutely amazed me. I don’t know how to articulate it any better than that.” 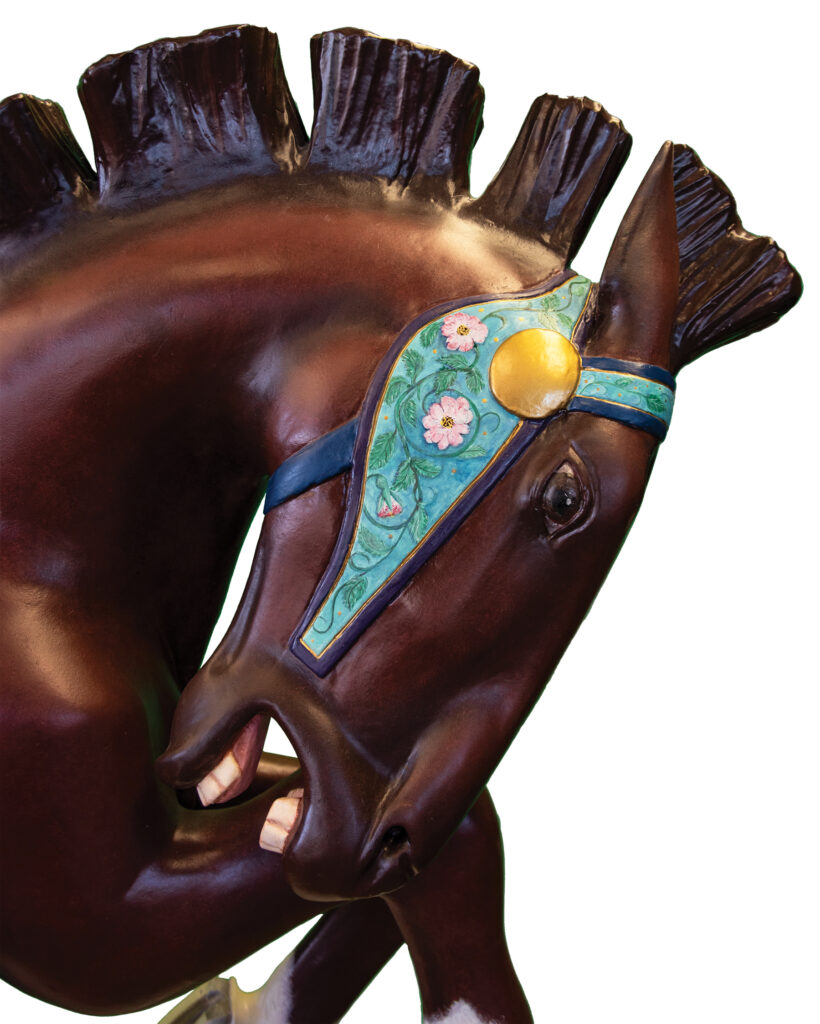 A close-up view of Capt’n Jack’s head after reconstruction and painting.

To say the community is interested by the Carousel of Smiles is an understatement. When the Hutchisons unpacked the carousel from the trailers in 2016, an estimated 500 people showed up to take their first look at the time capsule. When the carousel was fully assembled in 2018 for the first time, more than 1,000 people gathered to see it put together. The closer the restoration project gets to completion, the more excited the Hutchisons feel for the eventual ribbon cutting — hopefully in 2023.

When the restored carousel is finally unveiled in 2023, the Hutchisons expect to have the National Carousel Association on hand, with plans in the works to bring their national convention to Sandpoint that year, though COVID-19 has thrown a wrench in the scheduling.

“The head of NCA just a couple days ago — Pat Wentzell is president — he reminded us to thoroughly document everything we’re doing because he said it’s very rare,” Clay said. “He said they don’t have very many opportunities to document original carousels like this.”

In the meantime, the Hutchisons and their volunteers are continuing the work, watching it all come together for the eventual date when their labor of love can be presented to the community for the ages.

“We said right off, the first time we did the unloading event, ‘If you love this carousel, the carousel will love you back,’” Clay said. “Some of our volunteers said they’d had a renewed purpose in life. It comes down to the smile on young kids’ faces and everything in between. We love to see that spark.”

“If you have to find one word for it, it’s ‘magic,’” Reno added. “It truly creates magic for people.”

To follow the restoration process, visit thecarouselofsmiles.org or visit their studio in Sandpoint at the Misty Mountain building on the west side of Fifth Avenue and Cedar Street. 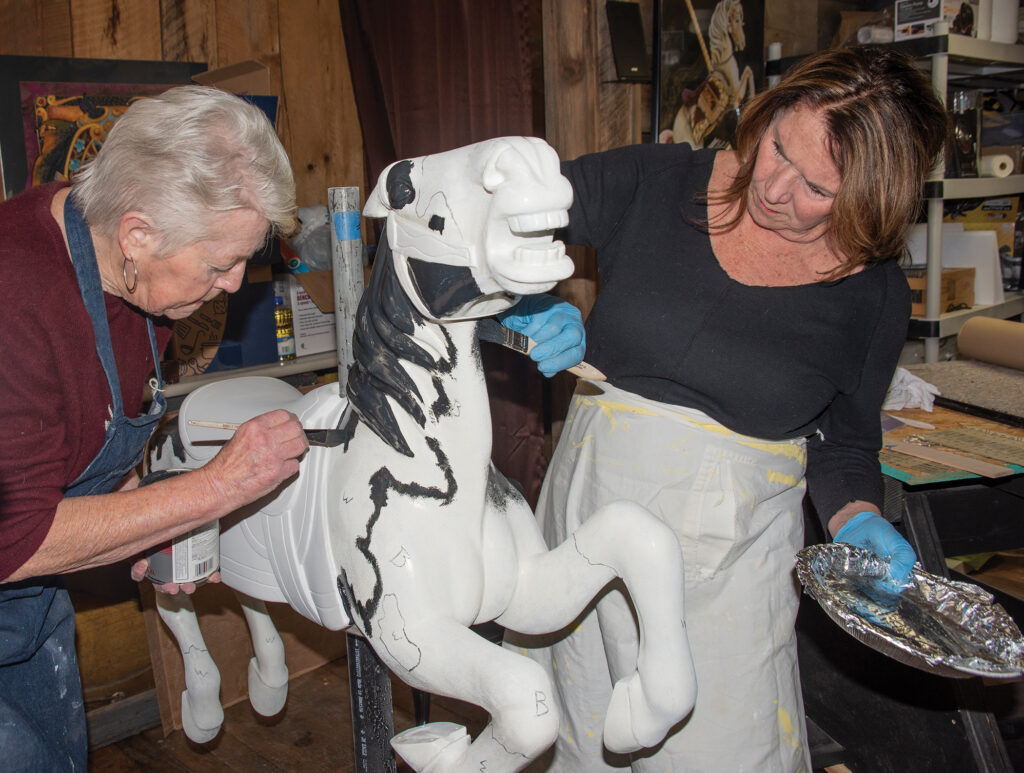 Gabe Gabel and Mary Day begin painting the pinto horse. Gabe and Mary were just two of dozens of volunteers who are helping restore the Carousel of Smiles.