By Melissa Davlin
For Idaho Reports

On a cold night in November, a state contracted service “could have led to the death of a special needs child,” according to documents obtained by Idaho Reports.

After a medical appointment, a driver with a transportation company for Medicaid clients dropped off a teenager with special needs at the wrong southern Idaho home.

No one knows what happened in the two hours between when the driver left and when the teenager’s mother found him near a busy street. The young man, a Medicaid client, is non-verbal. The driver, an employee of a Meridian-based transportation company, claims he walked the young man to the back door of the house. That’s unlikely; there were people home at the time who didn’t see him.

“Most likely the driver let him out of the vehicle and drove away,” says a complaint filed with the state. The incident “resulted in stress and trauma for everyone involved in the incident,” and forced the client, who has a compromised immune system, to spend two hours standing outside in the cold.

The incident, confirmed via an Owyhee County Sheriff’s Office report, is one of almost 400 from around the state lodged over Idaho’s non-emergency medical transportation services in the last six months. An Idaho Reports investigation revealed issues including tardiness, poor customer service, inadequate safety measures, alleged sexual assault and life-endangering mistakes—but issues with the transportation services started well before last year. 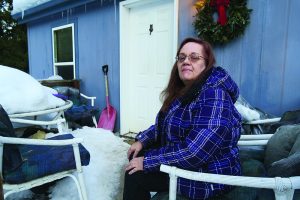 Patty Earnest, at her home in Sagle, relies on non-emergency medical transportation. Her story will appear in next week’s conclusion to this series. Photo by Ben Olson

The complaints, which Idaho Reports obtained via public records request, started that day. Some involve Veyo and its services, while others are aimed at the local commercial providers.

Priest River resident James Bayles said his 28-year-old daughter, Caitlin, has cerebral palsy, and relies on a local transportation company to give her rides from her care center to medical appointments. His frustrations with Veyo began almost right away. Though the transportation service is locally owned and has worked with Caitlin in the past, Bayles has to go through Veyo to schedule rides. Any changes take 48 hours, even if the change is the result of Veyo’s mistake—a scenario that Bayles said played out in late December, when Veyo’s computer system automatically kicked Caitlin off the schedule because of a glitch.

The area has only one local transportation service, and that company has only one van with a wheelchair lift. If that van is already booked or out of commission, Bayles, a disabled veteran, must transport Caitlin himself—a task that causes him severe back pain. He has to pick her up to place her in and out of the car, and secure her heavy motorized wheelchair to the back of his vehicle.

Bayles trusts the local company to take care of Caitlin, but is concerned for other families in the community that rely on the independent drivers dispatched by Veyo.

“We’re talking about the most vulnerable population in the state,” Bayles said. Clients with autism, bipolar disorder, or other conditions rely on consistency.

“With changing the driver, just whoever happens to be there with their Uber ready to pick them up? These people don’t do well with change,” Bayles said.

A pattern of complaints

Bayles isn’t alone in his concerns. Most grievances involve drivers who are late, far too early, or totally absent, but some mistakes have endangered clients’ lives.

During one transport in late November, a male client got into a pill bottle and chewed up multiple pills of Risperdal, a drug taken for bipolar disorder.

“No one saw this?” the complaint says. Staff at the facility noticed the white powder on his face and took him to the hospital, where he was admitted for supervision after a bad electrocardiogram.

“The facility supervisor called Veyo and asked for the name of the driver that transported and they said they would talk to family directly,” the complaint says. “We needed the information for doctors at the ER but were unable to get it.”

One complaint, also in November, alleges sexual assault of an adult female passenger by the driver. Several complaints regard children or special-needs clients being dropped off without supervision. In a December incident, a client with Down syndrome was dropped off alone in front of her home. She wandered into her own back yard, where she was found. “Family and service providers have repeatedly told Veyo driver must, for safety reasons, walk her to the door and ensure she gets safely into the house,” the complaint says.

Matt Wimmer, administrator for the division of Medicaid at the Department of Health and Welfare, said the department works closely with Veyo to address concerns.

That month alone, Veyo administered 101,697 trips in Idaho, of which 6,366 were from independent driver providers, Wimmer said.

“(Seventy complaints) is actually not bad, considering the level of service,” Wimmer said.

So if this was the standard all along, are Medicaid workers comfortable with the complaints and safety issues?

Wimmer said due to the nature of transportation and all the related variables — traffic, weather, car maintenance — there will always be complaints about tardiness. He also pointed out the number of logistics involved with what seems like a basic transportation service: Getting appointment information from clients or third parties, making sure that information is entered correctly, and relaying the correct information to the driver.

But even a single complaint regarding the safety of a client, Wimmer said, “is one too many.”

“We’re really aware of the problems and frustrations,” Komenda said, adding he realizes tardiness can add to a client’s stress. “Honestly, our heart breaks if someone has a frustration or failure.”

Komenda said Veyo has completed more than 525,000 trips in Idaho since taking over in July. Of those, majority — 93 percent — have been carried out by local contracted companies.

He acknowledged hiccups in the transition, as well as challenges unique to Idaho. Some rural addresses, for example, don’t show up accurately on maps. The Veyo team is addressing this, Komenda said, and is working on rolling out a new GPS tracking system that will help clients and Veyo call center staff locate where drivers are in real-time.

House Health and Welfare Chairman Fred Wood, R-Burley, said he’s heard almost no complaints over Veyo’s services. While he does want to hear the concerns, he said he wasn’t going to get too excited until he’d studied the issue.

“Any time there’s change, people really seem to have a problem,” Wood said, pointing to past transition issues with Medicaid contractors Optum and Melina. Those issues were ironed out, Wood said, and he expects the same will happen with Veyo.

And if it doesn’t? That’s up to the Department of Health and Welfare to deal with, Wood said.

“The legislature is not going to interfere with a state contract,” Wood said. But, he said, his primary concern is making sure Medicaid patients get to their appointments safely.

Bayles, the Priest River father, said he has contacted his lawmakers, and is paying attention to who will help him fix the problem. He said North Idaho lawmakers Rep. Heather Scott, R-Blanchard, and Sen. Shawn Keough, R-Sandpoint, have been responsive and interested in helping him.

“I know it’s going to be a political process,” Bayles said. “I’ll find the ones who are on our side.” And for those who aren’t, he said, he’ll work to get them voted out of office.

Next week: The business side of medical transportation